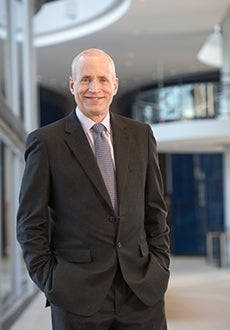 Yale School of Management (SOM) Dean Edward A. Snyder has been reappointed to another term in the post, President Peter Salovey has announced.

“In his initial term, which concludes on June 30 of this year, Dean Snyder has shepherded SOM forward with great acumen and enthusiasm during an exciting period for the school,” Salovey said in a letter to the SOM community. “I am delighted that he is willing to continue in this capacity and foster SOM’s continued excellence and prominence on the world stage. We have seen the School of Management flourish along many dimensions — notably among them, the spectacular new Edward P. Evans Hall; the strategic expansion of the school’s programs, both degree and non-degree; the opening of Yale Center Beijing, which is managed by SOM on behalf of the university; and the development of a strong SOM team, internally and externally.”

In his letter, Salovey noted other accomplishments under Snyder’s leadership, including the development of the first global network of top business schools, the launch of the new Master of Advanced Management degree; the expansion of the MBA for Executives program to include areas of focus in asset management and sustainability; and an enhanced entrepreneurship programs that “exemplify the school’s efforts to foster connections with the wider university.” In the last five years, the number of SOM students pursuing joint degrees with other Yale professional schools has doubled, and the percentage of women students in SOM degree programs is now at a 30-year high, said Salovey, noting that throughout Snyder’s term, the SOM community has focused on increasing diversity across identities, backgrounds, and affiliations.

Snyder is the William S. Beinecke Professor of Economics and Management at SOM. His research and teaching is focused on industrial organization, antitrust economics, law and economics, and financial institutions. He earned a Ph.D. in economics and an M.A. in public policy at the University of Chicago, and began his professional career as an economist with the U.S. Department of Justice’s Antitrust Division. He began his academic career at the University of Michigan, where he developed programs in Central Europe, China, India, and Russia. Before coming to Yale, he was the Dean and George Shultz Professor of Economics at the University of Chicago Booth School of Business.

Salovey said in his announcement that many members of the SOM community wrote to recommend the dean’s reappointment.

“In reading the comments that so many of you took the time to send me, I was struck anew by the many facets of the dean’s leadership and the abundance of connections he has forged for the school,” Salovey said. “You wrote of his talent for motivating colleagues, uniting faculty, staff, and students in a strong sense of purpose. You lauded his clear agenda toward transforming SOM into one of the world’s elite business schools. And you spoke of his commitment to Yale SOM’s unique mission to educate leaders for business and society.”