“Meant to Be Shared,” a new exhibition featuring works by some of the most renowned Italian, Spanish, and French artists of the 18th to the 20th centuries, will be on view at the Yale University Art Gallery from Dec. 18 through April 24.
Share this with Facebook Share this with Twitter Share this with LinkedIn Share this with Email Print this 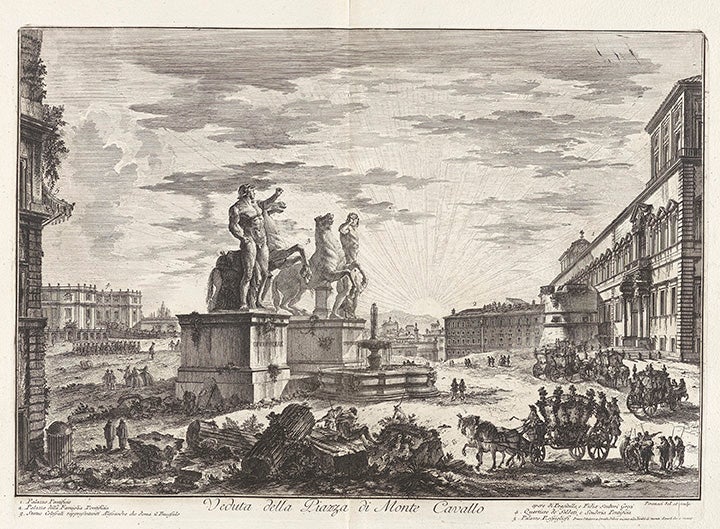 “Meant to Be Shared,” a new exhibition featuring works by some of the  most renowned Italian, Spanish, and French artists of the 18th to the 20th centuries, will be on view at the Yale University Art Gallery from Dec. 18 through April 24.

Subtitled “Selections from the Arthur Ross Collection of European Prints at the Yale University Art Gallery,” the exhibition presents highlights of the more than 1,200 prints the Arthur Ross Foundation donated to Yale in 2012, including works by Francisco Goya, Édouard Manet and Pablo Picasso; as well as Giovanni Battista Piranesi’s images of ancient and 18th-century Rome.

“Far and away the most difficult aspect of preparing this exhibition was to make a selection from the abundance of riches that constitute this extraordinary donation,” says Suzanne Boorsch, the Gallery’s Robert L. Solley Curator of Prints and Drawings and curator of the exhibition. “The possibilities that the Arthur Ross Collection offers for exhibition, research, and teaching are virtually endless, and, indeed, this inaugural exhibition and the collection catalogue are just the beginning of the rewards to be reaped by the study and enjoyment of this gift.”

This exhibition features 19 of Goya’s mysterious “Disparates (Los proverbios)”(Follies [Proverbs]) series, made around 1816 to 1819 but not published in Goya’s lifetime, for fear of the Inquisition. Ten images from the “Tauromaquia”(The Art of Bullfighting; 1815, published 1816) series and nine of the “Desastres de la Guerra”(Disasters of War; ca. 1810–11, published 1863) are on display as well.

The installation also highlights illustrations of great works of literature — one of the salient themes of the French work — including Delacroix’s 13 lithographs illustrating William Shakespeare’s “Hamlet”(1834–43) and some of his illustrations for Johann Wolfgang von Goethe’s “Faust”(1827, published 1828), and Manet’s illustrations for Edgar Allan Poe’s “The Raven”(1875).

An entire gallery is devoted to views of places that might have been visited on the Italian segment of the Grand Tour, the cultural tour of Europe that was deemed an essential cap to the classical education of young gentlemen, especially those from Britain. Views of the Venetian region by Canaletto set the stage. The largest section is devoted to Rome; this part of the exhibition features a 6-by-7-foot map of the Eternal City, published in 1748, designed by the surveyor Giovanni Battista Nolli, and 20 of Piranesi’s “Vedute”(Views; ca. 1748–60) of Rome. The final area focuses on images of Pompeii and Paestum, in southern Italy, where in the mid-18th century rediscoveries of ancient sites excited the intelligentsia across Europe.

Philanthropist Arthur Ross (1910–2007) collected these prints for his eponymous foundation with the express purpose, in the words of his widow, Janet C. Ross, “to lend first-class prints … to educational institutions in the United States and abroad that would not otherwise have access to such objects for study and enjoyment.” In this spirit, the exhibition travels to the Samuel P. Harn Museum of Art at the University of Florida, Gainesville, in early 2017, and to the Syracuse University Art Galleries, New York, later that year. Gallery staff members have partnered with Harn Museum Director Rebecca M. Nagy and Syracuse University Art Galleries Director Domenic Iacono to plan ways to use the prints as teaching tools at each institution — including related university courses, public programs, and close-looking sessions — throughout the run of the exhibition.

“We are grateful that the Arthur Ross Foundation has chosen the gallery to be the steward of this remarkable collection, ensuring its proper care and always sharing it generously with active learners of all ages,” says Jock Reynolds, the gallery’s Henry J. Heinz II Director.

The Yale University Art Gallery, located at 1111 Chapel St., is open to the public free of charge. Museum hours are Tuesday–Friday, 10 a.m.–5 p.m.; Thursday until 8 p.m. (September–June); and Saturday–Sunday, 11 a.m.–5 p.m. The gallery is closed Mondays and major holidays. For general information, call 203-432-0600 or visit the website at http://artgallery.yale.edu.