Once a champion debater in high school, Yale senior Joshua Feinzig is well acquainted with the traditional rules and procedures in debate competitions.

In a history seminar last year on “Politics and Culture of the U.S. Color Line,” however, Feinzig began to think about how those rules and procedures can put students of color at a disadvantage in such competitions, and about the public reaction when some of those students transformed the procedures to be more competitive. The seminar is taught by Matthew Jacobson, the William Robertson Coe Professor of American Studies and History, and professor of African American studies.

Feinzig’s term paper for the seminar, titled “Black Performativity, Reflexivity, and Reclaiming the Public Sphere,” recently earned him a prestigious Undergraduate Award — an international honor that is often referred to as a “junior Nobel Prize.”

The Yale student was among just 25 overall winners of The Undergraduate Awards, receiving a Gold Medal from the president of Ireland, Michael D. Higgins, at a ceremony in Dublin last month.

The Undergraduate Awards program is the world’s largest academic honors program. It recognizes “excellent research and original work” across the sciences, humanities, business, and creative arts. This year, more than 5,000 undergraduate students from 255 universities across 39 countries submitted their work. Only one winner is selected for each of 25 categories of research; Feinzig won in the gender studies & anthropology category.

“Joshua has done extraordinarily well to receive this medal, which places him as a global leader in his research field at this early stage of his academic career,” said Louise Hodgson, executive director of The Undergraduate Awards. “Congratulations to Joshua, as well as his lecturers and supervisors at Yale.”

As a winner of the award, Feinzig attended a four-day Undergraduate Awards Global Summit, which brought the winners and other top performers in the award competition to Ireland to recognize their achievement and encourage cross-discipline and cross-border collaboration. The summit featured talks and workshops run by philosopher A.C. Grayling, astrophysicist Dame Jocelyn Bell Burnell, and genome sequencer Craig Ventor.

Feinzig presented his own paper, a modified version of his Yale seminar project, at the summit and attended a medal ceremony in Dublin Castle.

“It was very humbling to learn I won the award,” says Feinzig. “I was very proud of my paper, but with so many entries I was rather shocked to be chosen. The trip to Ireland was my first time in western Europe, and it was a great experience.”

Feinzig, who is majoring in Ethics, Politics, and Economics, says that he watched with interest in 2013 when two black students from Emporia State University in Kansas won a national debate tournament even though the team bypassed the rules. Instead of addressing the debate resolution about alternative energy, the duo instead spoke about how the framework of collegiate debate disempowers students of color.

“It was really an amazing moment,” says Feinzig, whose award-winning paper examined the public reaction to the students’ debate win. “The relationship between argument form and race within the debate sphere can provide certain insights into the roles of race and identity in the American public sphere at-large.”

A Florida native, Feinzig taught debate and coached teams of urban middle school students in Miami while still in high school, and says that his personal experience doing so also gave him a better understanding of how traditional debate practices and rules presuppose certain assumptions about the competitors.

“Students were constantly looking for ways to interpret debate resolutions through the lens of their own experiences,” Feinzig says. “They were interested in topics like the criminal justice system, and would talk about family members being incarcerated. I got to know a lot about the kids and their family lives.”

His experience with the younger students also helped spur Feinzig’s own interest in criminal justice policy and political theory. He is particularly interested in the intellectual history of state justifications for mass incarceration. 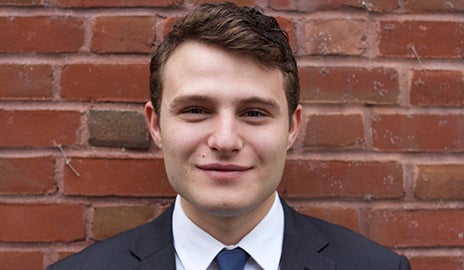 While functioning as a traditional courtroom and taking place in the federal courthouse, Project Youth Court allows trained youth volunteers to act as jurors, judges, attorneys, and bailiffs. Most punishments offenders receive are “restorative,” such as a defined period of community service or helping the victim. When the accused completes the sentence, his or her record is cleared.

“Youth Court is a model that has been very effective in other states,” says Feinzig, who worked with the New Haven Mayor’s Office, New Haven Board of Education, the city’s police department, and various other governmental boards and organizations to establish the court. He is currently working to ensure the sustainability of the court long after he graduates in May.

During the summer after his sophomore year at Yale, Feinzig conducted criminal justice policy research at the White House Council of Economic Advisors. He has also done research for the Connecticut Governor’s Youth and Urban Violence Commission, and currently serves as a city commissioner on the New Haven Peace Commission, which helps to promote a culture of peace in New Haven and beyond.

As a Yale Law School Arthur Liman Public Interest Fellow last summer, Feinzig worked as an investigator for the New Orleans Public Defenders as well as for a public interest law firm in St. Louis. There, he independently researched the municipal court and jail systems, and the results of his study on discriminatory and “debtors’ prison” practices were written up in Newsweek and have played a role in ongoing class-action lawsuits.

“I looked at practices by which people get arrested for non-violent crimes — mostly those in which the punishment was simply to pay a fee, but end up resulting in jail time, usually for failure to pay fines. An example would be a 22-year-old being pulled over and arrested for not paying two traffic tickets he received at the age of 18. Poor municipalities rely on these practices more for financial benefit, creating systems that amount to modern-day debtors’ prisons. My study looked at how these practices relate to income level and race. I found that poor people of color are disproportionately affected.”

In 2014, Feinzig was a Director’s Fellow at the Institution for Social and Policy Studies (ISPS), where he worked on a yet-to-be published research project with ISPS director and political scientist Jacob Hacker. As a communication and consent educator, he works to promote s a positive sexual climate at Yale, and also serves on the Dean’s Advisory Committee and the Intercultural Affairs Council. He is a founding editor-in-chief of the Yale Journal of Political Thought and a former editor of The Yale Herald. Feinzig spent the summer after his freshman year in the Yalies in Israel program researching  “how Bedouin communities use their own traditions of crime problem-solving to retain a sense of sovereignty and independence,” he says.

Feinzig is interested in an academic career related to law and political theory and says that whatever his future career, he intends to continue working to create a more just legal system.

“I’m very interested in criminal justice reform and innovating alternatives to incarceration,” says Feinzig. “We have to figure out how to reduce a whole host of violent crimes, and we are always going to need to optimize crime policy. While we need to balance effectiveness and fairness when designing punishments, the most effective punishments are often those that align with our democratic, humane values.”