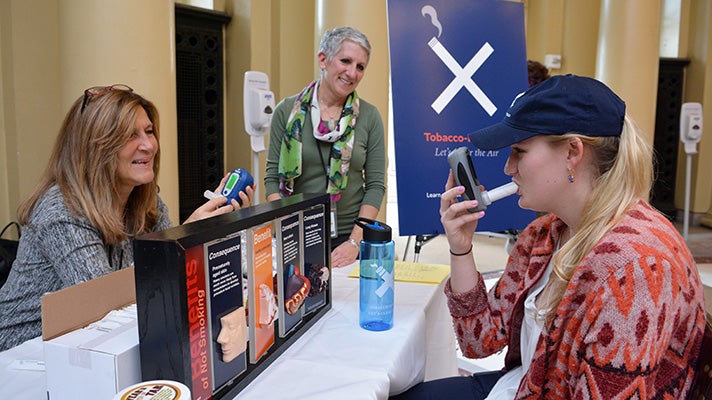 The university’s goal to become a tobacco-free campus might be making you jittery, reminding you that now is as good a time as any to quit smoking. Perhaps you’ve wanted to quit for years, but are nervous about the physical challenges of trying to beat that addiction. Maybe you’ve even tried before, but weren’t successful.

The good news is that — whatever your circumstances — there is help available to support you as you quit, whether for the first time or the ninth.

“One of the university’s top priorities is the health and well-being of its students, faculty, and staff,” says Lisa Kimmel, senior wellness manager of Being Well at Yale. “We understand that quitting tobacco is difficult and complex, and the university is committed to helping create an environment to support faculty, staff, and their families in their attempts to quit.”

President Peter Salovey announced earlier this month that Yale would become a tobacco-free campus, saying, “Our goal is to create a healthier university community, foster a campus culture in which tobacco users are supported in their efforts to quit, and become a model for other universities to emulate.”

The “Tobacco-Free Yale … Let’s Clear the Air” campaign was launched on Nov. 19 — also the day of the American Cancer Society’s annual Great American Smokeout — with an event attended by over 300 people in the Schwarzman Center rotunda.

Yale’s campaign is geared toward eliminating the use of tobacco products of any kind. A committee of representatives from throughout the campus worked to develop and expand effective smoking cessation programs for Yale students, faculty, and staff.

“This is a project that is very dear to me, and one that my colleagues and I have been working on for quite a few years,” says Dr. Paul Genecin, director of Yale Health and clinical associate professor of medicine at Yale School of Medicine. “There are excellent studies demonstrating that the majority of smokers are looking for ways to quit. Employers and health care providers who support cessation through policies, programs, and the design of health benefits are doing the right thing.”

For faculty and staff members, and their dependents, the Tobacco-Free Yale initiative offers a tobacco cessation program in which those trying to quit can have scheduled telephone appointments (ranging from 15 to 30 minutes) with a health coach.

“The coaches are highly trained in smoking cessation,” says Kimmel. “The program takes a holistic approach to quitting smoking, looking at the individual person and his or her triggers and challenges.”

Educational and planning materials are offered to help participants stay tobacco-free, and the telephonic coaching can be combined with free nicotine replacement therapy (NRT) medications, such as the nicotine patch, nicotine gum or lozenges, and bupropion (Zyban®) and varenicline (Chantix®). Prescriptions are required for the medications; those interested in NRT can work with their health coach to determine the best regimen. Under the Affordable Care Act, notes Kimmel, individuals are eligible for up to six months of NRT without a co-pay. To learn more about the program or to enroll, call 1-866-237-1198, Monday–Thursday, 8 a.m.–8 p.m. and Friday, 8 a.m.–6 p.m.

NRT is also available to faculty and staff who do not take part in telephonic coaching but still requires a prescription to be covered under the benefit.

“We know that one technique does not work for everyone, and we respect that,” says Kimmel.

In addition to access to the Craving to Quit app, students who are eager to give up the habit can receive one-on-one support from the health educator for Student Wellness at Yale Health. Students are advised to work with their primary care physicians to determine the best aids for quitting smoking.

Staff members in six Yale dining halls have been taking part in a smoking cessation program and study led by Stephanie O’Malley, director of the Division of Substance Abuse Research in the Department of Psychiatry, which also takes an individualized approach to help smokers quit.

“We are offering state-of-the-art treatment, which includes nicotine replacement products, financial rewards for quitting, and counseling, directly in the dining halls,” says O’Malley, who is also a professor of psychiatry and deputy chair of clinical research. “We are trying to determine the value and effectiveness of bringing treatment directly to the workplace. In the past, programs at the university that have required participants to travel from their own work sites have not been as well attended. This program, which just recently rolled out, has been quite popular with dining hall staff.”

O’Malley says that as part of this program, participants may also choose to cut down on their smoking initially with the goal of quitting smoking.

“Most smokers would like to quit. The sooner you quit, the greater the benefits to your health over time, and some of the benefits from quitting are immediate,” says O’Malley, who with Suchitra Krishnan-Sarin co-leads the Yale Tobacco Center for Regulatory Science. The center, funded by the National Institutes of Health in collaboration with the U.S. Food & Drug Administration, conducts research aimed at helping the federal government regulate tobacco.

According to the American Cancer Society, just one hour after quitting smoking, heart rate and blood pressure drop; in just 12 hours, the carbon monoxide level in the blood returns to normal; and in two weeks to three months after quitting, circulation improves and lung function increases. One year after quitting, the risk of coronary heart disease as a result of smoking is half that of a continuing smoker’s risk. (See the illustration below.)

In addition to being and looking healthier, quitting smoking also has enormous financial benefits. As noted in the accompanying illustration, individuals who quit a pack-a-day habit can save approximately $56 a week and nearly $3,000 a year.

The City of New Haven, meanwhile, passed an anti-tobacco ordinance in May 2015 that prohibits the use of all forms of tobacco in city parks or other city-owned recreational properties, or on public school grounds. Lighthouse Beach Park is among the areas where smoking is no longer allowed.

A matter of public health

Tobacco use is the leading cause of preventable death in the United States, Kimmel and Genecin note, and the dangers of second-hand smoke have also been well documented.

“A smoke-free environment is healthy for everyone, including the soon-to-be ex-smoker, but also the community that is no longer exposed to second-hand smoke,” Genecin comments. “The healthcare effects of smoking cessation are quickly realized whether we look at near-term benefits of fewer sick days and hospitalizations, or the longer-term benefits such as reductions in cancer and cardiovascular complications of tobacco-use disorders. I am thrilled that President Salovey has emerged as a leader in this field through his commitment to a smoke-free Yale University.” 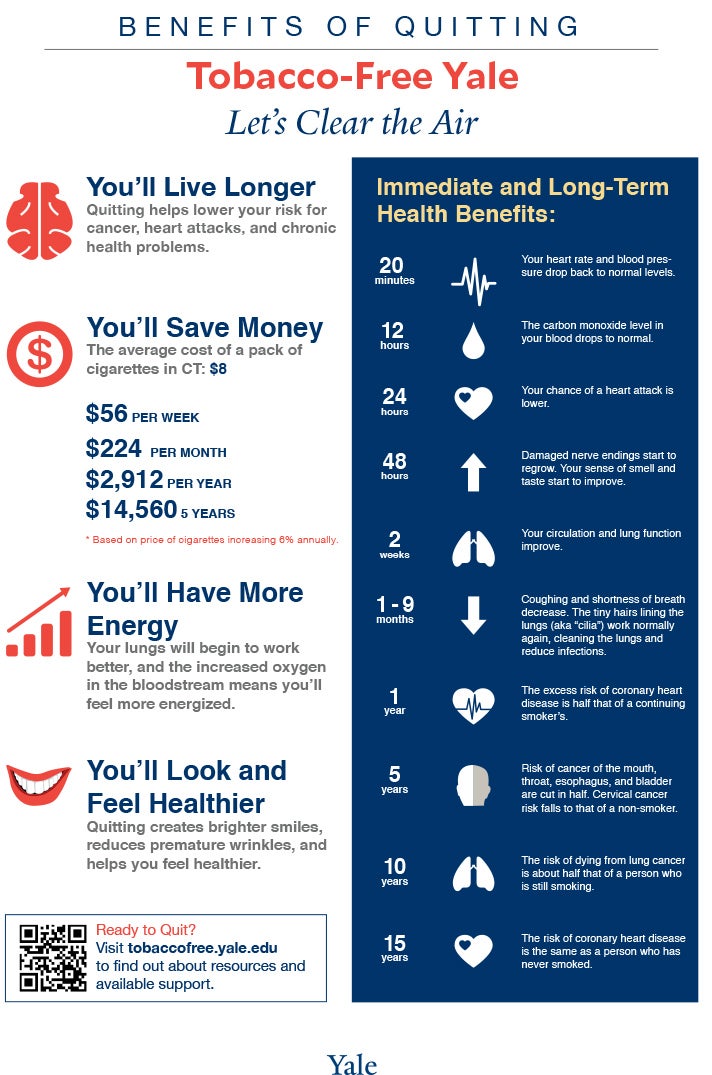