Three Yale students were chosen to be members of the class of 2016 Rhodes Scholars.

Jared C. Milfred, Isaac M. Stanley-Becker, and Mason Y. Ji were among the 32 chosen for the coveted scholarship from a pool of 869 applicants nominated by 316 colleges and universities in a nationwide competition.

Rhodes Scholarships, which are among the most prestigious awards for international study, were created in 1902 at the bequest of British philanthropist Cecil Rhodes. The award provides all expenses for two or three years of study at the University of Oxford in England to those students who best exemplify “academic achievement, integrity of character, a spirit of unselfishness and leadership potential.”

The Rhodes Scholarship winners are: 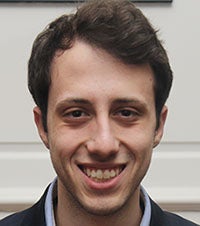 majors in ethics, politics, and economics. He has combined research in political theory and political science with a passion for social justice advocacy and campaign finance reform. He founded the nonpartisan student advocacy organizations Democracy United, serves as the chief executive of the National Council of City Public Financing Agencies, and chairs the City of New Haven Campaign Finance Board. Milfred worked as a speechwriter for U.S. Attorney General Loretta Lynch and is editor-in-chief of Yale’s Journal of Political Thought, as well as the ethics editor of the Yale Philosophy Review. He volunteers as an EMT for Yale Emergency Medical Services and as a reader for blind students at Yale’s Office on Disabilities. At age 17, Milfred became the youngest licensed nuclear reactor operator in the United States. He will pursue an M.Phil. in political theory at Oxford.

majors in history. He is writing his senior essay on industrial transformation and civil disobedience in the port city of New London, Connecticut. Stanley-Becker is an award-winning journalist and an historian of modern urban society. He served as editor-in-chief of the Yale Daily News and interned at the Washington Post, The Wall Street Journal, the Pittsburgh Post-Gazette, and the Milwaukee Journal Sentinel. Stanley-Becker also founded the Hillhouse High Journalism Project to teach journalism to New Haven public high school students. He enjoys spending summers working on the docks and hauling lobster traps on an island off the coast of Maine. At Oxford, he intends to complete an M.Phil. in economic and social history.

is a senior at Yale, majoring in global affairs. He studied abroad at Peking University, where he took all his international relations classes in Chinese with native students at the university’s School of International Studies. His senior thesis explores how deepened East-West dialogue has given rise to multicultural dispute resolution mechanisms. Mason was also, at age 18, the youngest United Nations delegate, and adviser to the Mission of the Republic of the Seychelles. A Udall Scholar, he co-authored a document that influenced the 2014 U.S.-China joint statement on climate change. He has interned at the White House and for one of China’s largest law firms, is a competitive table tennis player in the United States and China, and is principal oboe for the Yale Concert Band. He plans to seek an  M.Phil. in international relations at Oxford.