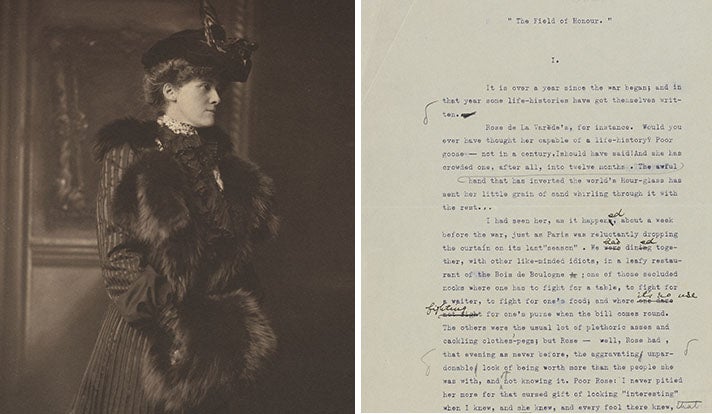 The Edith Wharton papers at the Beinecke Rare Book & Manuscript Library contain about 50,000 items, including the author’s voluminous correspondence, drafts of her short stories and essays, and manuscripts of most her novels, including  “The House of Mirth,” “Ethan Frome,” and “The Age of Innocence.”

Scholars have combed over the collection since it joined the Yale Collection of American Literature after Wharton’s death in 1938, but the papers, which have been expanded over the years, continue to yield discoveries.

Alice Kelly, postdoctoral writing fellow in the Women in the Humanities Program at Oxford Research Center, was doing research at the Beinecke for a critical edition of Wharton’s First World War reporting when she came upon “The Field of Honour,” an unpublished short story that Wharton likely wrote during the war.

Through scholarly detective work, Kelly, who came to Yale as a Fox International Fellow from Cambridge University in 2012, determined that the manuscript had somehow gone unnoticed. The story is not referenced in Wharton’s correspondence. It appears that nobody had written about it.

The story concerns Rose Belknap, an American socialite living in Paris shortly after the war’s outbreak. Belknap’s French husband has joined the army, liberating her from an unhappy marriage.

Kelly, who has written about the story in the Times Literary Supplement, argues that the story demonstrates Wharton’s concerns that women were “profiting socially, professionally, and even sexually from the wartime economy that privileged their lives over male lives.”

She recently spoke to YaleNews about her discovery.

How did you determine the significance of this manuscript?

The story is listed in the collection’s finding aid, so this is not the same as finding something lodged in Edith Wharton’s personal papers or something that had fallen out of a book on shelf. But what is interesting is that nobody has ever before mentioned it in print. There’s no reference to it in the major biographies of Wharton. It’s not listed among her works. It’s never been reprinted.

I came to it because I thought the title of the story was so interesting. “The Field of Honour” refers to the battlefield. It’s a term that has been in use since the medieval period. In the First World War it comes to take on a real significance. As a scholar of the First World War, you can’t read the term without wondering if it refers to a First World War story.

I was fortunate to have an extended time at Yale, initially as a Fox International Fellow from Cambridge University during the 2012-2013 academic year and then as a visiting assistant in research, to determine the importance of this story, whether it was as unique as I believed it was. It took a good bit of background research. I spoke to other Wharton scholars and worked out if anybody had ever seen it before. Everyone I spoke to said “no.”

The Beinecke has this incredible collection of Wharton’s work, and it’s nice to know that there are still things in there that are unknown.  It is a demonstration of Yale’s wonderful and limitless resources.

When did Wharton write “The Field of Honour”?

The story appears unfinished, but it is clear that she spent a lot of time on this story. It is annotated twice. The first part is in typescript, and the second part in manuscript. We don’t know what exactly the relationship was between those two parts, whether there was originally the whole story in typescript and she changed the ending or whether it is completed — that is something that is debatable. The story has a kind of rise and fall to it. What’s particularly interesting is the fact that she chose never to publish it.

Why do you think she never published it?

There might have been a number of factors. Perhaps it was a bit too harsh about women war workers in France. She may have felt that, as the war ended, she didn’t want to be so hard on the people who had been involved in it. Perhaps, she had written to publishers and they had not been interested in her war fiction.  It may have been that she just thought there wasn’t a market for it, or it may have been that she abandoned it to work on “The Age of Innocence,” which was published in 1920.

With her other war fiction and reportage, she wasn’t always that concerned about where it was published, as anything she sold would provide money for her war charities, so I’m a bit surprised that she didn’t do anything with this piece at all. My reaction to that was to look through the correspondence for places where she might have submitted it and see whether they had rejected it. I never found any reference to it anywhere.

How was her war fiction generally received?

To some extent, her war fiction has been critically neglected. A prominent critic in the 1960s said that reading her 1923 novel, “A Son at the Front,” is like pulling an old propaganda poster out of the trunk.  There’s always been a sense that although Wharton is a wonderful writer of society novels — such as “The House of Mirth,” “The Custom of the Country, “The Age of Innocence” — in wartime, her writing is much more basic, much more crude, and she becomes a propagandist. My aim is to get us to rethink that period in Wharton’s writing career. She was still a very interesting writer during the war, although she did adapt her skills to advocate for the war cause.

She wrote in a variety of genres during the war. She wrote three other short stories that we know of. She wrote to Scribner’s, her editors in New York, that she had ideas for five or six stories.  She wrote the novels “Summer” in 1917 and “The Marne,” which I think is her least sophisticated novel, in 1918. She wrote war reports that get published for an American audience in Scribner’s Magazine. Those are propaganda pieces as she tries to implicitly advocate for America’s participation in the war. Even if it is propaganda, it is very interesting propaganda, and she’s a very clever writer.

How does “The Field of Honour” relate to Wharton’s other war fiction?

“The Field of Honour” shows that she is thinking about the war in very interesting ways. It demonstrates some of her anxieties about the war. It seemed to her that women were profiting from the war, and she was anxious about that.

She wrote other interesting stories about the war. She wrote a story in 1915 called “Coming Home” that is essentially about war rape. A French soldier returns to his hometown, which has miraculously survived a German invasion that destroyed much of the surrounding area. The implication that is never raised is that his wife has slept with a German officer in order to protect her family and her family home. It is a fascinating, troublesome, and difficult war story that shows that Wharton was engaging with the war and writing about very difficult moral aspects of the war. I think she deserves more credit for that.

What is the significance of the story’s title?

We tend to think of First World War writing in terms of the trench poets: Wilfred Owen, Siegfried Sassoon, Edmund Blunden, and so on. Part of my work is about examining the other aspects of wartime experience, the civilian experience largely. I was very happy to see that Wharton was writing a war story, but writing it from the perspective of women in Paris, on the French home front, and touching on all the changes to society that war brings. The more that you study World War I culture, the more you learn that the war affected all aspects of life. I think it’s difficult for readers today to comprehend that because the recent wars that the U.S. and England have engaged in were far away.

What do the physical characteristics of the manuscript — both typed and handwritten with pages composed of fragments of paper stuck together — say about Wharton’s writing process?

I think it was very typical of how she wrote. She tended to write things by hand. She normally wrote in bed from early in the morning until noon. She had a bed that faced a window. This was the case when she was at home, although I’m not sure if it was the case during the war. She had a routine. She would write by hand, and a secretary would type the pages, and then she would revise them.

On this typescript, you can see where she’s added things, rethought words, and changed phrasings. At the end, she’s done this interesting thing where she goes from typescript to writing by hand, which suggests she added something or changed it. I call it Wharton’s “cut and paste.” She literally cuts apart sentences and sticks them together with glue, as far as I can tell.

When I was teaching a freshman class at Yale on “Cultures and Commemorations of War” in fall 2014, I took my students to the Beinecke — this is one of the wonderful things about that incredible resource — to have them study the ways that writers write. You learn that people aren’t geniuses. They don’t get everything right the first time. They have to draft and think and revise. The students learned that authors are human and constantly need to revise and rethink things. Wharton is fun in that way because you can see how much she is rethinking and rewriting.

Do you think the character Rose Belknap was based on someone Wharton had encountered in Paris?

I’m sure Rose was based on any of the number of the superficial war volunteers who Wharton was scornful of in some of her letters. Whether there is an actual, distinctive model for Rose Belknap, I don’t know.

I’d love it if a scholar came along now and said, “Oh, Rose reminds me of this description in this particular letter.” Wharton corresponded with people daily. It’s very hard to be a Wharton biographer and know about all the people she possibly met and had encountered. That’s why it’s nice that this is in the public eye. Hopefully, somebody will recognize Rose Belknap.

Interestingly, that’s the name of a character in “The Marne,” which is her 1918 novel. It’s a different character with the same name, Mrs. Belknap. I don’t think that there is any relation between the two characters, but it would be interesting if somebody proved there was.

How deep was Wharton’s commitment to the war effort?

Wharton assumed a very active role in the war effort, which can be surprising for those who know her as a famous society author. The French Red Cross approached her in August 1914 — as soon as the war broke out — to set up an ouvroir, or a sewing room, in Paris for seamstresses who were out of work.

She headed off to England to spend the summer in another author’s country house, and she became so frustrated being away from the action that she returned to France as soon as she could get passage there. She went right to work establishing war-related charities. She managed four in total by the war’s end. These range from a charity that looked after Belgian refugee children to a sanatorium that cared for people with tuberculosis. She was the primary fundraiser.  She repeatedly wrote to newspapers like The New York Times and put out funding appeals for what became known as Mrs. Wharton’s War Charities. She did her writing beside this full-time job of contributing to the war effort.

I don’t want to make her out to be a saint, but she certainly did things that she didn’t have to do and that other artists didn’t do. She wasn’t afraid to get her hands dirty, and she worked tirelessly for four years.