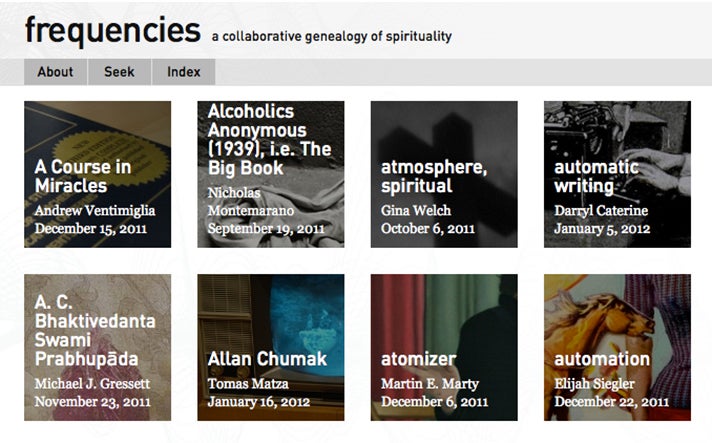 “What comes to mind when you think of spirituality?”

That one question, posed to 100 writers, artists, and scholars, resulted in a collection of more than 100 provocative essays — on topics ranging from iPhones to chicken sandwiches to Mohammad’s hair — delivered daily to more than 800 subscribers’ in-boxes, and presented online as Frequencies: A Collaborative Genealogy of Spirituality.

“We wanted to bring a little shot of the humanities to your e-mail in-box,” said Lofton. “It was intended to be a little guerilla. We wanted to offer readers a quick, intense glimpse of a smart writer wrestling seriously with something that maybe not everyone thought was so serious.”

This November, Frequencies migrated to a new URL, hosted by the Social Science Research Council’s (SSRC) religion site, “The Immanent Frame,” in partnership with Killing the Buddah, an online magazine of religion, culture, and politics.

Lofton and Modern first conceived Frequencies when they were part of an SSRC working group exploring spirituality, political engagement, and public life. In particular, they were looking at politically left-leaning Americans who consider themselves “spiritual, but not religious,” and how they voted in the last presidential election. The project was intended to focus on how political thinkers could incite spiritual action on behalf of the political left.

“This seemed a backwards way of thinking about spirituality,” said Lofton. “We developed Frequencies as a critique of that programmatic view. The key attribute of spirituality is how it resists any organizational gesture. We ended up using Frequencies to offer a roundabout rebuke to anyone who thought spirituality was inherently politically liberal, or could be applied to any singular political or economic ends.”

She and Modern reached out to writers, journalists, academics, and artists to create the online compendium. “Spirituality abounds, even as it is unclear what it is,” they wrote in the project description. “Whatever it is, it seems hard to capture. Spirituality takes hold beneath the skin and permeates below the radar of statistical surveys. It resists classification, even as it classifies its evaluators and its believers as subjects of its sway.”

The two editors provided a list of American historical figures, material objects, geographic locations, texts, images, movements, and events that might inspire reflections on spirituality, including the Dead Letter Office, Siddha yoga, and Wounded Knee. Authors were also invited to nominate their own ideas for subjects. Each short essay was accompanied by original artwork submitted to the project editors.

“We wanted our writers to think about the relationship between devotional life and critical thinking. Every entry demonstrates how one scholar solved a problem about a particular word or category that they connected to the idea of spirituality,” said Lofton.

Lofton said that all of the entries — whether about Park 51, Philip K. Dick, or the Harlem Renaissance — describe rituals or experiences in specific, even highly technical, detail. She noted that these kinds of rigorous observations accrue as one reads entry after entry, giving a view of spirituality that is much less amorphous and more specific.

“These entries capture how seriously weird, meticulously abstract, and obsessively particularistic spirituality can be,” she said.

The inaugural entry on “enthusiasm,” was by Harvard philosopher Amy Hollywood. Some of Lofton’s favorite entries include reflections on the book “A Course in Miracles,” by Andrew Ventimiglia; a photograph of “Happy S. Love,” a disciple of Father Divine’s Peace Mission Movement, by Judith Weisenfeld; Mormon “king” “James Strang’s letter of appointment,” housed in the Beinecke Rare Book and Manuscript Library, by David Walker; and “Saint February,” by Julie Byrne. The final entry, “the list,” by Nancy Levene, a senior research scholar at Yale, appraises the project as a whole.

The site has both a search tool and index. It also has a “seek” function that allows visitors to scroll through all of the entries at a glance. “It lends a kind of a card catalogue quality to the entries,” says Lofton. “The entry on prayer is equal in size and emphasis to an entry on blood. They are all the same value.”

Today, Frequencies exists as a kind of “Internet statue,” according to Lofton — an artifact used by classes to teach the history of spirituality and religious movements.

Lofton said that the project demonstrated the value and reach of digital humanities projects, and also brought to the foreground challenges of such projects in her field.

“Doing 100 entries in 100 days required coordinating with amazing writers for months and months in advance,” said Lofton, noting that participation in online media can sometimes be challenging for humanities scholars due to the quick demand for content.

“Making a lot of commentary in a short amount of time is not what humanist scholars do best. Humanists are masters of the consommé. We are less expert at fast food, better at slow food.  We tried to see how we could combine the fast world of Internet content with the slow work of humanism. Frequencies is the result,” she said.

Lofton and Modern just announced their next collaboration, which is a book series with the University of Chicago Press titled Class 200: New Studies in Religion. (Class 200 takes its name from the Dewey Decimal System call number for religion.) “Producing a Web-based project was fast, quick-moving work,” Lofton explained. “We want to see what interpretive life analog content has left in an increasingly digital world.”