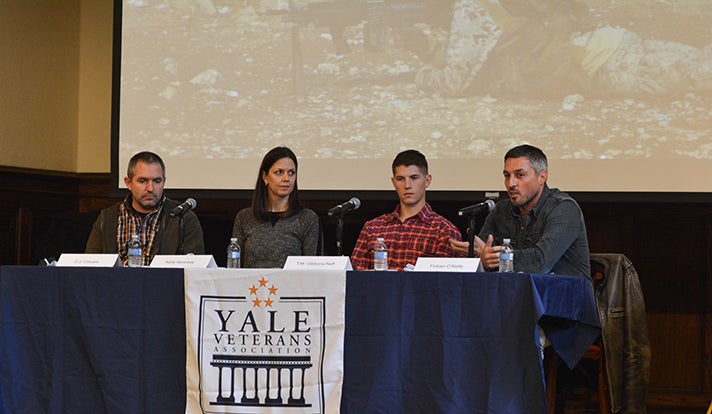 A tough question was asked of the panelists who took part in the Veterans Day discussion “From Rifles to Laptops: Combat Veterans Covering Conflicts”: Why — after seeing firsthand the horrors of war — would anyone want to risk his or her life to write about it?

Moderator Finbarr O’Reilly, an award-winning former Reuters reporter and photographer who has covered conflicts in Africa and Afghanistan, posed the question.

“Anyone who has been [to war] who says they don’t miss it is probably lying,” answered T.M. Gibbons-Neff, who served in the U.S. Marine Corps 2007-2011 during two combat deployments to Afghanistan and is now covering the military as a staff writer at the Washington Post.

“There’s an appeal there, a simplicity about being in a combat zone that is nice in weird ways,” he continued. Gibbons-Neff just recently returned from covering the front in Ukraine, which was his first time in a war zone since leaving the military.

“When I got to the front, an old part of my brain turned on, and I felt in a weird way like I was back home. It’s strange to miss it, but you romanticize it so much. I understand that [saying] that is kind of disconcerting.”

Kelly Kennedy, who served in Iraq during Operation Desert Storm and Somalia as a soldier in the U.S. Army 1987-1993, said she had never imagined she would ever be back in an area of combat.

“I had no desire whatsoever after I got out of combat zones to go back,” she commented. “In Desert Storm, I remember driving through the desert wearing a bomb suit, hoping nothing would hurt me, listening to Madonna. I was scared out of my mind. In Mogadishu, I remember driving around with weapons loaded and pointed at humans, and just really not being okay with that.”

While covering news — including the problems of Post-Traumatic Stress Disorder and traumatic brain injury in veterans — for Military Times, Kennedy went to Iraq in 2007. There, she was embedded with Charlie Company, 1-26 Infantry, one of the units that suffered the greatest losses of life in the war. Kennedy wrote about the experiences in her bestselling book “They Fought for Each Other: The Triumph and Tragedy of the Hardest Hit Unit in Iraq.”

“I’d be lying if I said I wasn’t terrified when I went back,” Kennedy told the audience in the Whitney Humanities Center auditorium. “It wasn’t my thing at all. But if you are going to get the heart of that story, and you are going to take care of your ‘boys,’ you have to go see what they are seeing.”

The third panelist, C.J. Chivers, is a member of a New York Times team that received a Pulitzer Prize for its dispatches from Pakistan and Afghanistan, and he has also reported on Ukraine, Russia, Syria, Iraq, and Africa. He served in the Marine Corp 1998-1994.

“It you are in and around violence — intense random or intense organized violence — for long enough, it affects your wiring,” Chivers told the audience. “You are different, changed. It rewires you completely, and if you are astute at any level, if you are paying attention at any level, once your wiring changes it’s very hard to change yourself out of that. It’s hard to find satisfaction without that intensity.

“There is a line they say about combat,” he continued: “‘Once around the track is too many. Once more is never enough.’ It is like a drug. You don’t go for the drug; you go for other purposes, but you get the drug while you are doing it.”

Each of the panelists described their reasons for joining the military and later, for choosing a career in journalism that is focused on the military.

Kennedy, who said she knew at a young age that she wanted to be a journalist, joined the military because “there were not a lot of options for paying for education,” in the small Indiana town where she grew up. She joined the National Guard in high school. She and her family were so naïve about the military that her mother asked whether she would have a chaperone while in basic Army training, and she herself never really imagined she would end up in combat when she enlisted in 1987.

Her military experience further inspired her interest in pursuing journalism as a career.

Gibbons-Neff, the son of a Vietnam War veteran, said his catalyst for joining the military was the 9/11 terrorist attack. He lived just 40 miles from New York City and was in eighth grade when the Twin Towers fell.

Chivers, also the son of a Vietnam veteran, said that he was in college in 1983 when he learned of the terrorist bombings of U.S. Marine and French barracks in Beirut, killing nearly 300 people.

“I just remember being on campus, looking at Newsweek magazine and looking around the campus and feeling a stronger affinity with the Marines than with my fellow students,” said the journalist. He added, “The military occupied a funny place for a lot of us. It was kind of an escape but a legitimate escape. You can’t join a motorcycle gang, but you can join the Marine Corps. I had a lot of energy. [Joining the Marines] was a solid way to get of town if you are in college in 1983 and want to get out of town.”

He and Kennedy attended journalism schools following their military service, while Gibbons-Neff just graduated in May from Georgetown University. His career in journalism, he said, really began on his first day of college.

“My assistant team leader in Afghanistan died in a motorcycle accident, and his funeral was on the first day of school,” said Gibbons-Neff. “He was my best friend. I wrote about him and pitched it to the ‘At War’ blog for The New York Times. My writing just took off from there.”

Chivers said that journalism appealed to him not only for the writing involved but also the investigative process.

“The hunt for information, the hunt to solve a puzzle … and to try to turn that puzzle into something coherent became a satisfying way of thinking,” said Chivers.

The author of the 2010 book “The Gun,” a history of automatic arms, Chivers has distinguished himself by writing about armaments and provisions.  He described some of the challenges he has faced as a veteran with a degree of technical military expertise while on journalistic assignments. He told the audience how, on one occasion, while on a patrol in a hostile area outside of Fallujah in Iraq, he had to remain silent when he disagreed with a squad leader’s positioning of the squad on the side of a canal. A sniper ultimately fired into the squad.

“I thought we should be on the other side of the canal,” said Chivers. “But you don’t say anything because you can’t. It would be disrespectful, and if you influence, the moment you influence it and something happens, you own it.”

All three of the veterans said that their experience in the military has resulted in their having a level of distrust of the government and of the military itself.

“During Desert Storm, we were lined up and told we had to take these pills,” said Kennedy. “I took one pill and didn’t take them again. One out of four people who served in Desert Storm is sick, really sick, with neurological issues, muscle fatigue, memory loss. The pills, it turns out, were anti-nerve agent pills.”

Kennedy noted that nearly 100,000 troops may have been affected by exposure to sarin gas when the U.S. Air Force bombed a munitions factory during the war, and said that the troops also used industrial-strength DEET as well as a laundry detergent containing anti-nerve agents. The troops were supposed to use the detergent just once every six months, but many used it every time they washed clothing. It took a decade for the government to admit to the munitions factory bombing, she said.

Gibbons-Neff said that he felt that some of his friends died in vain when he heard how journalist Bob Woodward told a Duke University audience that the Obama administration-ordered surge in Afghanistan was a political move rather than a tactical one.

Chivers said he wrote an exposé pointing to evidence that some soldiers in Iraq had been injured by roadside bombs that contained mustard gas and nerve agents — a fact he said was denied by the military.

“A four-star general denied it to my face emphatically,” Chivers said. “But I had interviewed guys who had seen it.”

All of the veteran/journalists said they felt it was their responsibility to speak the truth and describe as accurately as possible what they witnessed in war zones, and especially to speak for those who cannot speak for themselves.

“If you don’t tell it straight, you are doing a disservice,” Kennedy said.

Chivers acknowledged that his war reporting has taken a toll on his family, and he has begun to scale back his travels to areas of conflict. One of his sons, he said, breaks out in hives whenever he is away.

“It’s fine for me, but it has been really hard on my family,” he admitted. “I’d go out for a sandwich and my kids would block the door.” He added that he is still trying to figure out exactly how to cover conflict from further afield, and said that being away from the places he is used to reporting from has been challenging.

“It’s like coming off heroin,” he commented. “I’m going half nuts.”

One of the organizers of the panel discussion is Adrian Bonenberger ’02, who served for tour tours of Afghanistan as an U.S. Army infantry officer 2005-2012 and the author of the memoir “Afghan Post.” He said he was inspired to hold a discussion among veteran journalists after a summer trip to Ukraine, where he experienced some of the same feelings he had while serving himself.