As the Yale School of Architecture (YSoA) prepares to celebrate its 100th anniversary in 2016, a new exhibition will explore the relationship between teaching architecture and the spaces in which that education takes place. 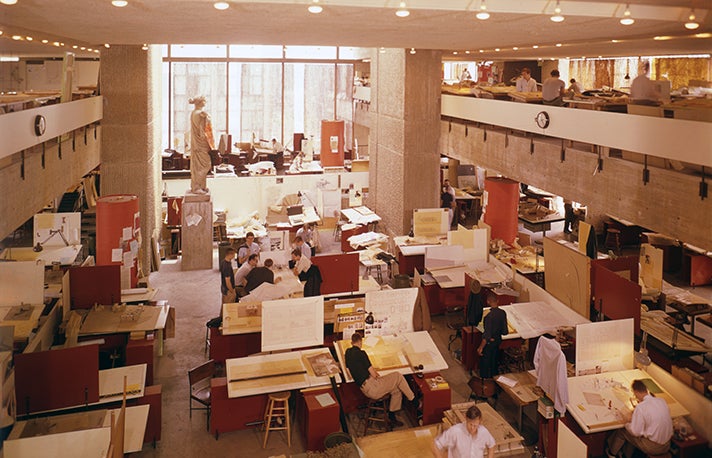 “Pedagogy and Place: Celebrating 100 Years of Architecture Education at Yale” has been organized by Jimmy Stamp ’11 M.E.D. and Robert A.M. Stern, the J.M. Hoppin Professor of Architecture, who is stepping down as dean of the YSoA at the end of June. The exhibition will present YSoA alumni work and archival documents tracing the development of architecture education at Yale and the buildings that have housed the architecture program.

An auxiliary installation, using research produced by students in Stern’s spring seminar, depicts more than 30 architecture schools from around the world to further illuminate the evolution of architecture education and the relationship between pedagogy and place. Schools documented in this section of the exhibition include Sir John Soane’s house, the École des Beaux-Arts, the Bauhaus, Harvard University Graduate School of Design, and The Cooper Union. A complete list of schools included in the exhibition can be found on Yale’s website.

A related publication, “Pedagogy and Place: 100 Years of Architecture Education at Yale,” will be published in April 2016 by Yale Press (hardcover, 664 p.). The book examines how the School of Architecture has evolved over the past century, tracing the impact of those who taught or studied there — as well as the architecturally significant buildings that housed the program — on the evolution of architecture education. There will also be a symposium, “Learning/Doing/Thinking: Educating Architects,” April 14–16.

Today the YSoA is widely considered to be one of the most prestigious architectural schools in the world, offering pre-professional courses to undergraduates and professional degrees to graduate students, as well as M.E.D. and Ph.D. degrees for advanced research. Many of the school’s students also pursue joint degree programs with the School of Management and School of Forestry & Environmental Studies. YSoA is also known for its Jim Vlock Building Project, mandatory for all first-year graduate students, who design and build a house in an economically challenged neighborhood in New Haven.

Stern graduated from the School of Architecture in 1965 and became dean in 1998. In late September Yale announced that Deborah Berke, architect and founder of the New York-based design firm Deborah Berke Partners, will assume the deanship July 1.