Advice from a Yale gardener: Don't be so quick to remove fall leaves 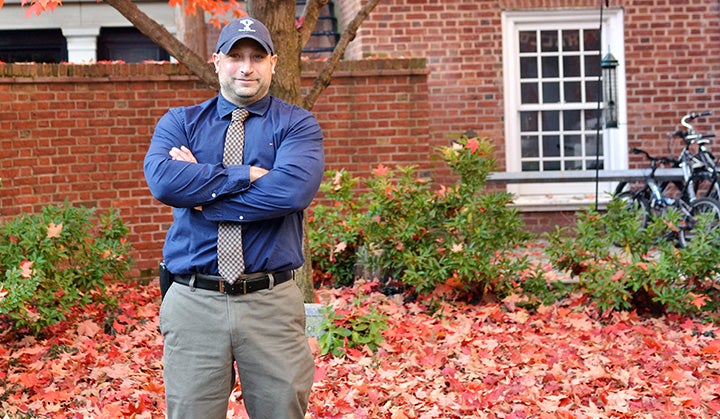 It’s that time of year, when we wake up to crisp, cool mornings, get bombarded by ads for pumpkin-flavored everything, and falling leaves.

Every year at this time, it is standard for people to pull out their rakes, blowers, vacuums, etc. for the seemingly unending battle of removing fallen leaves from their grounds. I have performed, supervised, and managed many of these operations including homeowners, commercial sites, and universities during my past 30 years or so in ground maintenance.

So, why am I telling you not to remove all of your fall leaves?

When I was in high school, I worked summers for a large contractor that served homeowners in Fairfield County. One of my responsibilities was to apply fertilizers and pesticides. I specifically remember the big rush at the school year’s end to apply systemic white grub control pesticides. In order to work, the systemic application needs to be absorbed by and become part of the grass (or plant) treated, so early summer application is necessary for the process to take place as grubs begin to feed. In addition, a broad-spectrum pesticide would occasionally need to be applied in the fall to control spots and areas where grubs survived, or were immune to the earlier treatment. A broad spectrum application treats the soil and, in turn, can possibly kill off the beneficial insects and microbial organisms.

For your information, grubs are white, thick C- shaped worms that feed on the roots of grass, killing patches of lawn. Grubs are the larvae of the Japanese beetle. The insects lay their eggs in the soil; these eggs turn to larvae; the larvae feed on the grass roots; and eventually pupate into an adult and start the cycle all over again.

In the 1990s, when I worked for a national commercial landscape company, I managed large-scale operations on corporate sites. Leaf-removal operations involved thousands of labor hours, hauling fees, and many visits to these sites to ensure they were left leaf-free before the winter season. To cut down on costs we decided to chop/mulch some of the leaves with mowers onsite, instead of hauling them away. Some of our customers did not like this new process and were concerned that the chopped-up leaves would smother their lawns; therefore for those customers we would perform full leaf removal.

After several years, I noticed that the sites that allowed us to the chop the leaves into the turf had insignificant or no grub infestation, including those properties that had no systemic grub control pesticides applied.

That got me wondering: Why did the lawns with the chopped or mulched leaves have significantly less or no white grub infestations?

I started working for Yale University in 2008, as one of the grounds supervisors, and quickly implemented the process of selectively shredding the leaves back into the turf. At around the same time, I attended a groundskeeper seminar where a professor spoke about a type of white mycelium that is toxic to grubs. (Mycelium is the vegetative part of a fungus consisting of a mass of branching thread-like hyphae.)

I had an “a-ha” moment. I remembered seeing the same type of mycelium growing where leaf mulch was breaking down. I began trying to replicate mycelium growth by experimenting in areas of the university where grubs had been present. I found significant results from my experiments after several years of mulching leaves back into the landscape. In the soil with mycelium or fungi present the grubs seemed to have some type of impairment and were not feeding. As an additional benefit, the leaf mulch improved the soil for microbial beneficial insects, including earth worms.

This fall, consider recycling some of your leaves back into the soil before hauling them all away.

Joseph Signore is supervisor of landscaping and grounds maintenance.