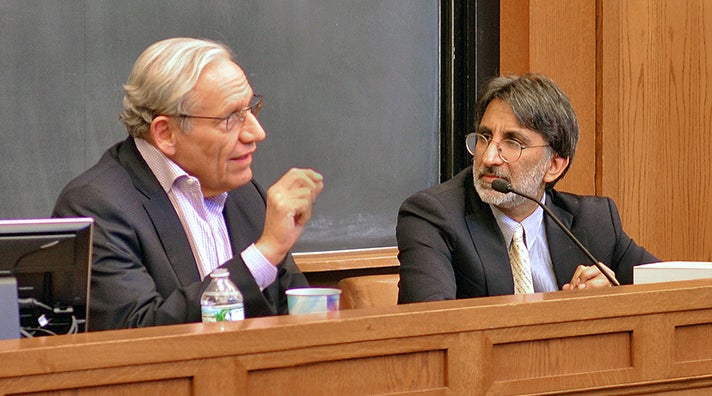 During an Oct. 19 visit to campus, noted investigative journalist Bob Woodward ’65 asked the members of his audience at Yale Law School to name the most worrisome issue facing America and the nation’s future.

But for Woodward, who with colleague Carl Bernstein broke the Watergate story in The Washington Post more than 40 years ago, nothing is more frightening than a government that operates in secret.

“Secret government is what will do us in,” said Woodward to a capacity crowd in a Law School lecture hall. “Democracies die in darkness.”

Woodward took part in a public conversation with Akhil Reed Amar, Sterling Professor of Law and Political Science, about his new book “The Last of the President’s Men.” The book is based on more than 40 hours of interviews Woodward conducted with Nixon aide Alexander Butterfield, who in 1973 disclosed to the Senate Watergate Committee the existence of a secret White House taping system. The White House tapes implicated Nixon in the obstruction of justice and led to his resignation on Aug. 9, 1974.

Woodward, an associate editor at The Washington Post who has won Pulitzer Prizes for his reporting on both Watergate and the Sept. 11 terrorist attacks, says he became interested in telling Butterfield’s story because it had never been told in the four decades since his revelation of the taping system changed the course of history. He added that Butterfield “had squirreled away thousands of documents” related to the Nixon White House, including “some that had never seen the light of day” and that more fully provide a portrait of the disgraced president.

Woodward said he believes that listening to the Nixon tapes “should almost be a requirement of citizenship” in America.

“Here you see Nixon essentially using the power of the presidency as an instrument of personal revenge and reward,” he told his audience. “If you listen to enough of the tapes, what’s surprising is ‘the dog that never barks’; No one ever says, ‘What would be good for the country?’ ‘What does the country need?’ Instead, it’s all about Nixon. It’s all about getting somebody, screwing somebody, getting the IRS on somebody, getting the FBI on somebody. And it was also about Nixon’s re-election.”

Butterfield, he pointed out, had the office next to the Oval Office for three years, a “front-row seat” for observing Nixon as president.

Before he wrote “The Last of the President’s Men,” Woodward said, there were “all kinds of things that never got reported about what [Butterfield] saw.”

Among the new details in his book that he shared with his Law School audience was a 1972 “top-secret memo” that Nixon scrawled in his own hand to Henry Kissinger, in which the former president wrote, “We have had 10 years of total control of the air in Laos and V.Nam. The result=Zilch.” Publicly, however, Nixon had been calling his strategy of bombing effective, Woodward noted.

The memo not only confirms the senselessness of the war, but also calls into question the fact that Nixon continued his strategy of massive bombing in the region, according to the journalist. Woodward said Nixon ordered the drop of 2.9 million tons of bombs in Southeast Asia — “a staggering amount” — and noted that 1.1 million tons of bombs fell after his “Zilch memo,” during his campaign for re-election.

“There are tapes and documents that show, essentially, that the bombing was to win re-election,” Woodward commented. “… Watergate was sabotage, espionage, anything to win re-election. The other side was to use the war he inherited from Lyndon Johnson for the purpose of re-election. There is not a more corrupt use of power that I could imagine.”

Woodward said he also learned from Butterfield about Nixon’s obsession with ridding White House staff offices of photographs of President John F. Kennedy, which the former president called an “infestation.” Nixon demanded that Butterfield accomplish the removal of the pictures without acknowledging it was an order from the president. In fact, he asked Butterfield to make it seem like the directive came from him. Butterfield titled his memo to Nixon reporting his success on the project “The Sanitization of the Executive Office.”

“For a president who should be doing more important things than to be worrying about these pictures as a slight on him, an attack on him … It’s inconceivable [to imagine]” said Woodward. He added that as much as we now know about Nixon, coming upon the new information from Butterfield raised the question: “What don’t we know? What’s buried in someone’s basement in terms of documents, or experiences, or stories?”

He called Nixon a “criminal on a scale unimaginable by the Founding Fathers,” but added that he eventually came to believe that Ford’s pardon of the former president was both “gutsy” and also right for the nation.

Asked by Amar to assess the current presidential candidates, Woodward declined, saying he did not feel qualified. He did say, however, that voters need to learn as much as they can about each of the candidates, including their characters.

During his conversation, Woodward also asked audience members if there was someone in the news business they trusted. While about half indicated that they did, he said that usually 75-80% of his audience members say they don’t.

“We’ve got to up our game,” said Woodward, referring to both the media and politicians.

America’s free speech and a free press are cause for optimism, the journalist concluded, noting that a common feature of life in Syria, Iran, Iraq, and Putin’s Russia is a lack of free speech.

“I’ve published sensitive, top-secret documents in the back of this book,” said Woodward, pointing to a copy of his latest book, his 17th work of nonfiction about American politics. “… At least so far, no one has come knocking on my door to arrest me or indict me. That’s because we have an operating First Amendment. The thing I hope for is that we never fall victim to that darkness [a lack of free speech and a free press] that can really surprise and devastate.”