Yale sophomore finds empowerment in her time at sea 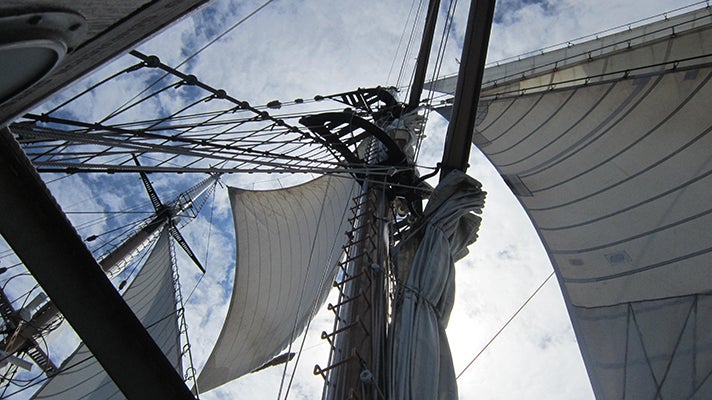 Summer has given way to autumn, but for Yale undergraduate Alexandra Leone ’18, memories of July and August sunsets, stars, and ocean winds are vivid reminders of an experience that felt to her like “a dream come true.”

Leone was one of a dozen undergraduate students from U.S. and Canadian colleges and universities to embark on a month-long exploration of four European port cities, traveling to each aboard a tall sailing ship.

The SEA Semester: Historic Seaports of Western Europe summer program, run by the Sea Education Association (SEA) of Woods Hole, Massachusetts, allowed Leone and the other participants to work for four weeks as active crew members aboard the SSV Corwith Cramer, a 134-foot brigantine operating in the Atlantic Ocean. The crew made visits to Cork, Ireland; Douarnenez, France; Lisbon, Portugal; and Cadiz, Spain.

During their weeks at sea and on land, the undergraduates learned about the major historical transformations in European maritime activity in the eastern North Atlantic, including the development of fisheries, trade, and nautical technology. In addition, they were able to see firsthand communities whose livelihood is tied to ocean resources and maritime trades, and they learned “the ropes” of tall-ship sailing.

Leone recently spoke with YaleNews about her time aboard a tall ship. Here is what we learned.

Something to prove: Leone first learned about summer sailing programs when she was in high school. When she first broached the idea of taking part in one with her family, her mother’s response was “Absolutely not.”

Growing up in New Jersey near the Pennsylvania border, the Yale student didn’t have much experience on the water beyond a sailing trip she made with an uncle while still in elementary school. However, Leone — also an avowed fan of pirate movies — says she has always been “enamored” with boats. She became even more serious about a sailing adventure last year.

“I wanted to see what it would be like, and I also wanted to prove to myself that I could do it,” she says. “I liked the shock value, too. No one expected me to do it, but then, when I said I was doing it, everyone said, ‘Of course you are.’”

A rough start: SEA has educated students about the world’s oceans via several study-abroad programs for more than four decades. Leone, who is considering a major in political science, says she applied for the Historical Seaports of Western Europe summer session because it is the only SEA program that focused on history, rather than on marine science.

Leone’s adventure began in Cork, Ireland, where she had a short orientation aboard the ship. While she has traveled to several countries in Latin America, it was her first visit to Europe. In addition to learning the “ropes of the ship — literally and metaphorically,” says the Yale student, she visited a couple of Irish heritage sites, including where the doomed Titanic picked up its final passengers before setting off for New York.

The Corwith Cramer then set off for France, a trip that proved to be one of the most difficult parts of Leone’s journey.

“The first three days of the five-day journey by ship were cold and wet,” she says. “The waves were pretty intense, and I became very seasick. For my first job, I was at forward watch, a position where you stand at the bow and just look forward, and I was doubled over because of my seasickness. I was seasick for the first two or three days, which felt like an eternity, but after that I was fine.”

Learning the ropes, sails, and ports: The 12 students were part of a crew of 29, which included the captain, several scientists and researchers, a professor and a teaching assistant, a steward, and an engineer.

Every day, the students devoted about two hours to class time on the quarterdeck, where they would learn about navigation, weather, some science (mostly focused on a marine animal or organism), and topics related to history, sailing, and ports. 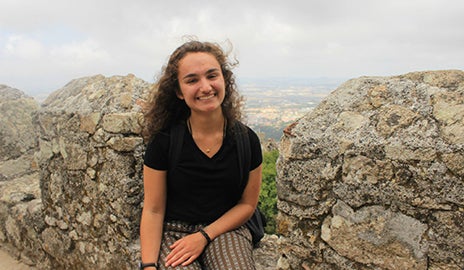 “Among the different topics we covered are conquistadors, navigation techniques through history, and sea poetry,” Leone explains. “We also explored the historic connection between the Virgin Mary and the sea in art and literature.” During her time at sea, the Yale student also read Joseph Conrad’s famed maritime novel “Lord Jim.”

In addition, the students took part in daily group sailing exercises, learning over time how to set [raise], strike [take down], and furl [fold] the ship’s sails. The SSV Corwith Cramer had 10 sails in all. They also stood watch during day or night shifts.

Looking and watching: The longest leg of the sea trip was from Douamenez, France, to Lisbon, Portugal, which took 10 days.

“After 10 days, I was really ready to be on land again,” comments Leone, adding that Lisbon was also her favorite port city.

“The architecture in Lisbon was really cool, and I enjoyed seeing the different sections, with their winding streets and brightly colored buildings,” she says. “It is clearly an underdeveloped city, but you could see its potential to be a world-class city. It had a bit of everything.”

Leone traveled just outside of the city to Sintra, where she and her crewmates toured the ancient Moorish castles.

Despite her first experience, serving as forward watch came to be one of Leone’s favorite parts of her time at sea. The forward watch or forward lookout scans the seas continually for other vessels or ocean hazards.

“For forward watch, you just stand at the bow of the ship for an hour-long shift,” explains Leone. “No one is supposed to distract you by talking to you. What I loved is that it was a nice time for reflection, and just to see the stars — which at sea were unlike anything I have ever seen anywhere else — was incredible. But it could also be a bit lonely having to stand there that whole time without conversation.”

Lighting the night: In addition, there were nights when the ocean — and even dolphins — would become bioluminescent, Leone says.

“Even the sunsets were out of this world,” she adds. “However, I never saw the green flash when the sun rises or sets, and I became infamous on the boat for how much I wanted to see it. That is still on my bucket list.”

Leone says that another challenging experience — being on the boat with 15- to 20-foot waves and an “angry-looking sky” ultimately ended with the treat of a double rainbow.

“We could see the full arc of the rainbow because at sea, there is nothing impeding it,” she says. “That was also one of the wonderful moments.”

Making nautical/musical connections: In addition to writing two papers at sea, Leone and the other student participants had a final project. For hers, she wrote a song based on the Beaufort scale, which is a measure that relates wind speed to observed conditions at sea or on land.

The project incorporated her own love of music, says Leone, who is a member of both the Damhsa Yale Irish Dancers and Dzana, the first Afrobeats dance group on campus. She also played piano and took part in a school chorus before coming to campus.

“I learned so much at sea,” including a bit of celestial navigation, and a whole lot about fish,” says Leone. “By the end of the trip, they had us leading watches. I had to act as the lead in the turning the boat around, telling people what to do. It was scary but cool!” 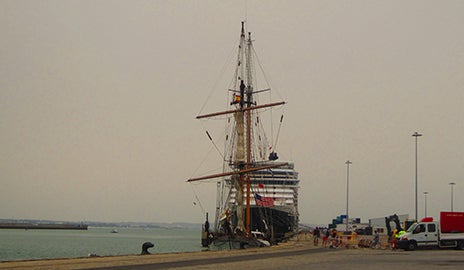 Romance and reality: Leone says she now has a greater appreciation for the difficulties of living aboard a ship for a long period, noting that, among other challenges, she only showered five times during her month-long trip. She was often deprived of a full night’s sleep because of night watch shifts, and she had scant email or phone contact with the outside world (a situation she eventually came to enjoy).

Nevertheless, the Yale sophomore says she’d love to have a sailing adventure in the future.

“It was really a singular experience. To be connected to a part of history and maritime life that is so hard to relate to anymore, but which was present for so long, is really amazing. At the end of our time, the second mate read a passage from the book ‘Tuning the Rig’ by a sailor-in-training [the book recounts his 66-day apprentice voyage from Boston to Greenland], and we all could relate to the experience of the author even though we only had a four-week trip.”

Future empowerment: Leone spent the other part of her summer working on a community empowerment programs for the organization A Woman’s Place, which serves women in Bucks County, Pennsylvania, who have experienced domestic violence. Back in New Haven she is a volunteer cultural companion through the Yale Refugee Project and is on the board of Net Impact, a social entrepreneur group on campus. She is working to start a mentorship program for New Haven middle school students, and says that she hopes to work for adolescent girl empowerment in the future.

Meanwhile, she still thinks about sailing.

“My time at sea made me wish to be a better sailor,” Leone comments. “I’d love to learn more.  Being at sea boosted my own confidence, and I feel now that if I can set the mains’l [main sail] on a ship, I am capable of going to school and getting a job. Here at Yale, we are being leaders and making decisions all the time. On the ship, I had to follow orders, even though at first I wasn’t even sure what those orders meant. It was a humbling but encouraging experience, and unforgettable.”