President of Malawi discusses the democratization of Malawi and Africa 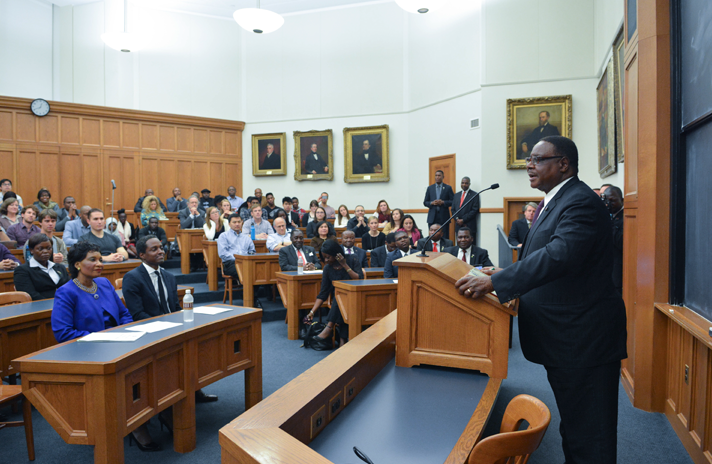 Peter Mutharika ’66 LL.M., ’69 J.S.D. returned to Yale on Oct. 1 for the first time since being elected president of Malawi to take part in the Hakeem & Myma Belo-Osagie Forum on Contemporary Africa and the Yale Africa Initiative. During his visit, he gave a lecture at the Yale Law School titled “Democratization and Economic Self-Determination in Africa.”

“The visit of the president carried a lot of meaning for Africans at Yale considering he was a student here in the mid 1960s,” said World Fellow Taz Chaponda, himself from Malawi. “I was particularly impressed by the emphasis on democracy and the ongoing process of deepening reforms across the African continent to promote trade and investment as key drivers of economic development.”

Mutharika noted in his introduction that while democracy has began to take root in Africa in the 1990s, economic self-determination has historically remained elusive for many African countries. He explained that while most African countries expected a “bright future” after gaining their independence, many countries fell into dictatorships soon after.

For Malawi, he argued that the post-independence ideology was “narrowly focused on economic growth,” rather than fighting poverty. In the wake of the 1970 oil price shocks, Malawi adopted economic reforms — known as the Structural Adjustments Programme of the Bretton Woods institutions — with mostly negative consequences.

“The economic reforms became known as the Washington Consensus and were imposed on Malawi and other African countries by the mid-1980s. Although we appeared to be running our own economic policies, the policy agenda was externally driven.  In essence, the self-determination we sought at independence had vanished,” he explained.

Since then, Malawi has held regular parliamentary and presidential elections every five years, including the first tripartite elections in 2014. Mutharika also cites the lack of political prisoners in recent times as evidence of the country’s improvement in the quality of governance.

“Even as we continue to deepen democracy, we are mindful that economic development has lagged far behind,” he continued. “You may wonder if good governance is a sufficient condition for economic growth and development. We believe that good governance and democracy is a necessary condition but it will not by itself eliminate poverty and inequality across Africa.”

Mutharika notes that the expanded democratization has raised Malawians’ expectations for greater political and economic freedoms, and a greater accountability from the government. Since taking office, Mutharika says he has worked to remove corruption from the public sector and strengthen finance management. In addition, he has worked to increase the skilled labor force by creating community colleges across the country.

“We are fully conscious that democracy only gives an illusion of power to the people and to ourselves, if the people are not economically empowered,” concluded Mutharika. “How can the people have true freedom if they don’t have the power to make economic choices?”

“Just over a year ago, I stated that ‘our first task is to create a proper economic, political, and democratic system. Our task is to re-create an environment that gives our people hope and belief once more.’ This remains our task today and for the foreseeable future.”