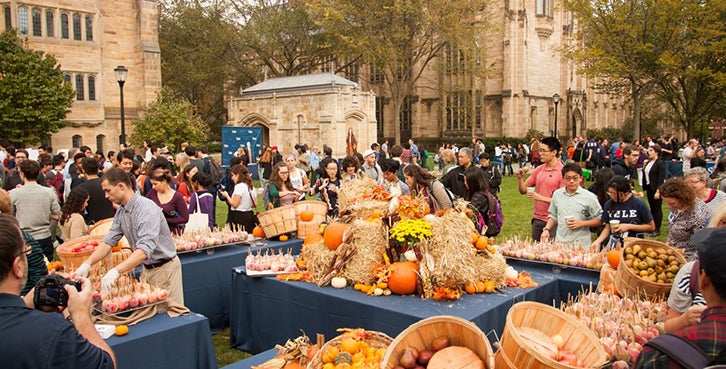 This month marks the 314th anniversary of Yale’s founding, and Yale Secretary and Vice President for Student Life Kimberly Goff-Crews notes that it’s an occasion meant to be marked.

“Yale Founders Day on Wednesday, October 7, 2015 provides an opportunity to celebrate Yale’s birthday with events around campus, including open houses, tours, and a fall celebration on the Cross Campus,” Goff-Crews said in a letter to the Yale community. In the letter, she noted that Yale was founded when the general court of the Connecticut colony assembled in New Haven in October 1701 to grant a charter for a collegiate school.

Founder’s Day features events at sites from the Divinity School to Science Hill, along with central campus, the museums and libraries, the medical center, and West Campus. Please visit the full Founders Day schedule online for full details of the morning and afternoon activities. All members of the community are also invited to participate in the day’s #InspiringYale Instagram Contest and the Founders Day Passport Contest.

“Yale has a long history, but it is not a historic artifact. Yale is active and alive,” President Salovey noted at last year’s inaugural Founders Day celebration. “We, today, are Yale. We are the guardians of its history, but we are also the makers of its tradition.”

Now in its second year, Founder’s Day is becoming a new Yale tradition to celebrate the university’s past, present, and future.