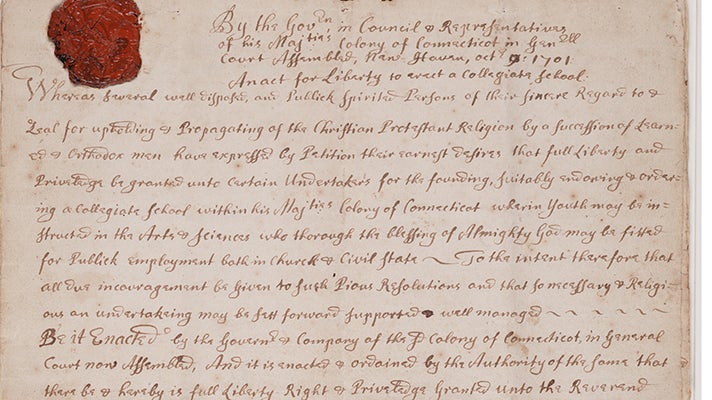 Every day thousands of people walk by Woodbridge Hall at 105 Wall St., the administrative heart of the university and home of the president’s and secretary’s offices. The building is also the meeting place of the university’s trustees, who gather there each May to approve the conferral of diplomas for every new Yale graduate.

Perhaps some passersby note the names carved into the entablature above the second floor windows – Noyes, Chauncey, Buckingham, Pierson, Mather, Andrew, Woodbridge, Pierpont, Russell, and Webb – and wonder about their significance.

They are all founders of the university, “several well disposed, and Publick spirited Persons” named in “An act for Liberty to erect a Collegiate School,” the charter for what has grown into today’s Yale, made by the governor and representatives of the Connecticut colony in general court assembled in New Haven in October 1701. That act, and its legacy, is the spur 314 years later for the second annual Founders Day, which will take place on Wednesday, Oct. 7.

If any of those 10 men named on Woodbridge Hall were to explore the campus now, they would likely be dazzled and surprised by their fledgling collegiate school’s development over the centuries. After all, the first class began when one student, Jacob Heminway from East Haven, appeared for instruction in March 1702 at the home of rector Abraham Pierson of Killingworth.

But, as Brooks Mather Kelley noted in his 1974 book “Yale: A History,” the seed those founders sowed allowed for growth. The 1701 act, he observes, “broadly defined the collegiate school as a place ‘wherein Youth may be instructed in the Arts and Sciences who through the blessing of Almighty God may be fitted for Publick employment both in Church and Civil State.’”

“Thus from the very beginning the college was viewed as more than just a school for ministers,” Kelley observes. And so the legacy of 10 like-minded Connecticut men more than three centuries ago has evolved into today’s global university, bringing together diverse people and academic pursuits. Appropriately, Founders Day 2015 will include tours of Woodridge Hall and dozens of other sites across campus that showcase the growth, breadth, and depth of contemporary Yale.

“Yale has a long history, but it is not an historic artifact. Yale is active and alive. Founders Day is for inspiration, not nostalgia,” President Peter Salovey said at last year’s celebration. “As we live in conversation with the past, let us remember where we are and when we are, and let us work for an ever more open, creative, and interdisciplinary university.”

That spirit of an “open, creative, and interdisciplinary university” that has developed from the collegiate school’s modest 1701 origins will be celebrated at Founders Day events throughout the morning and afternoon, including at a Cross Campus celebration taking place 11:30 a.m. to 1 p.m.