Papal Mass in Philadelphia to feature music by Yale composer 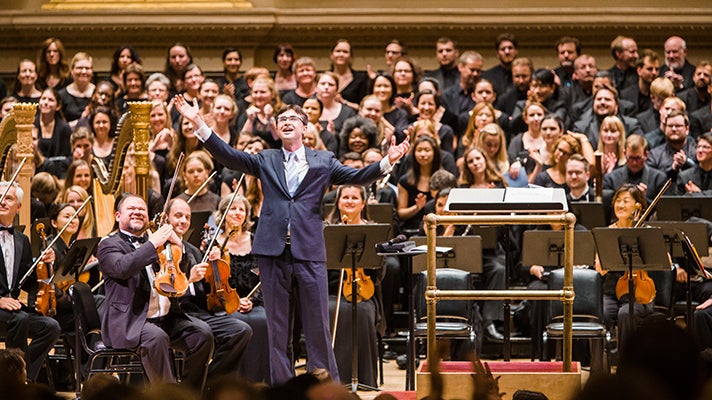 When Pope Francis celebrates Mass in Philadelphia on Sunday, the millions in attendance or tuning in on TV and radio will hear music written for the occasion by Julian Darius Revie, ‘02, composer in residence at Yale’s Saint Thomas More Chapel.

His piece, “The Love of God,” will be performed as the Pope receives Communion.

“This is a profound honor and beyond anything I could ever have anticipated,” says Revie. “But it’s not only a great honor; I also view it as a critical moment to show that the Catholic liturgy can still be a driving force for artistic and cultural creativity today, as it has been over the course of many centuries, and that art inspired by the liturgy can, even today, be truly novel while also being totally approachable, singable, and – hopefully – fundamentally beautiful.”

For Revie, the performance of his work at the Papal Mass completes a five-year journey that began with pieces he wrote in 2010 and 2012 as stand-alone works. He combined those pieces and built them into the “Mass of the Divine Shepherd,” a sweeping, hour-long musical exploration of the figure of the Good Shepherd that premiered at Carnegie Hall this past June. He conceived the concert as a conversation between a symphony orchestra, adult and children’s choruses, and 600 handbells. The children’s chorus was positioned in boxes around the hall and 200 handbell players stood in the back of the hall to envelop the audience in music.

“By enfolding the audience, my goal was to invite them into a musical and spiritual dialogue, where the music is performed not at them but rather with them, and that they would feel swept up in the musical conversation between the various parties around the hall,” Revie says.  “I hoped that dialogue, in particular between adult and children’s voices, might inspire them to come to the text of the Mass in a fresh way — such that the time and space of this shared musical experience might facilitate deepened opportunities for meditation and reflection.”

He used repetition and echoing melodies to attempt to move the audience to suspend their perception of time and be transported to a contemplative space.

Bishop Frank Caggiano of the Diocese of Bridgeport, who attended the Carnegie Hall concert, called the performance “a graced moment.” 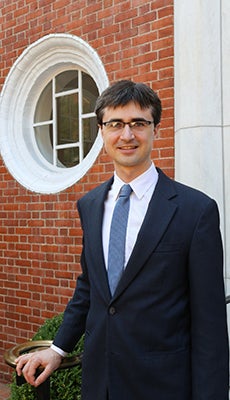 “The music was magnificent, and the people who attended were clearly moved on many levels by their participation in the event,” said Caggiano.

The Carnegie Hall event led directly to the opportunity to contribute a piece to the Papal Mass. The Archdiocesan Children’s Choir of Philadelphia had participated in the Carnegie Hall concert, and Revie traveled to Philadelphia several times to attend their rehearsals. The children’s choir’s music director invited Revie to write music for the Papal Mass using the text of the Communion antiphon, a verse from Scripture sung while the celebrant receives Communion, that will be used that day.

“By this we came to know the love of God:
That Christ laid down His life for us;
So we should lay down our lives for one another.”

Revie adapted his three-and-a-half minute piece for the Papal Mass from a section of “Mass of the DivineShepherd.” As he did with the longer work, Revie employs echoing melodies and repetition of liturgical text in “The Love of God.”

The piece contains layers of repetition of the antiphon that build to the final call to action, in which the children’s chorus takes the lead.

“That we should lay down our lives for one another is the call to action of this text,” says Revie. “I believe that the fact that the children will lead this is especially meaningful, given that they speak from a place of innocence — they are the pure of heart. Yet, they sing the most challenging words, requiring an almost impossible maturity.”

While he does not have the luxury of an acoustically resonant space for the Papal Mass, which will be held outdoors, he says the same ideas of dialogue, repetition, and suspension of time used in the Carnegie Hall concert are built into the piece.

“You will hear those next Sunday,” he says. “Particularly in the final segment of the piece, with the children beginning and then, one by one, each section of the adult chorus and orchestra joining and echoing the call to action. I hope it creates a cascading sensation that extends to the people at the Mass and those watching on television, so that the children’s summons becomes an inevitability.”

Revie has been traveling to Philadelphia weekly for the past two months to rehearse. He says it has been a busy but exciting time.

“It’s been a wonderful experience,” he says. “The singers, who aren’t professionals, are singing with heart and passion. They are putting themselves into this music 100%. They believe in every word they are singing, and on Sunday you will see that coming through immediately in a deeply inspiring way.”

Revie will be providing updates throughout the weekend on his website.