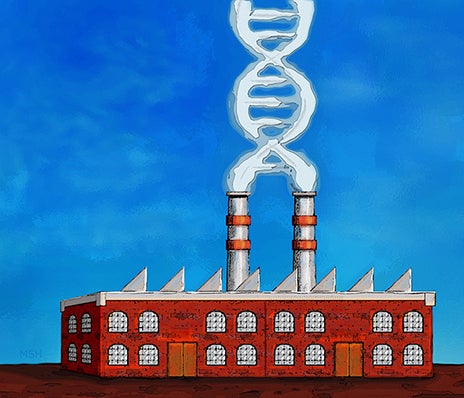 A Yale research team led by Jesse Rinehart and their colleagues at Northwestern University has improved ways to use genetically recoded organisms to produce a host of valuable new protein products that may pave the way for improved cancer drugs.

The findings build upon prior work by Yale team member Farren Isaacs who successfully recoded the genome of a strain of E. coli bacteria.

These recoded bacteria incorporate amino acids not found in nature and turn them into a living factory, capable of biomanufacturing new classes of proteins and polymers. These new molecules could lay the foundation for a new generation of materials, nanostructures, or proteins that can be used in the drug discovery process.

In one of two papers published Sept.  9 in the journal Nature Communications, Yale researcher describe how they increased efficiency of recoded E. coli to produce phosphorylated human proteins, which act as key switches that regulate biological signaling and activity. The new improved cellular factories enabled the Yale team to produce these human proteins at a scale and purity previously unobtainable by any other means.

“These enhanced technologies now allow us to produce difficult to obtain human proteins that can be used to develop new therapies for disease such as cancer,” said Rinehart, assistant professor of cellular and molecular physiology and senior author of the paper.

A second paper co-authored by Rinehart and Michael Jewett at Northwestern showed it was possible to derive a new cell-free system from the recoded cells and use it to produce phosphorylated human proteins.