More than 130 students arrived on campus a week early this summer to participate in the pre-orientation program Cultural Connections. The program ran from Aug. 22 to Aug. 27. 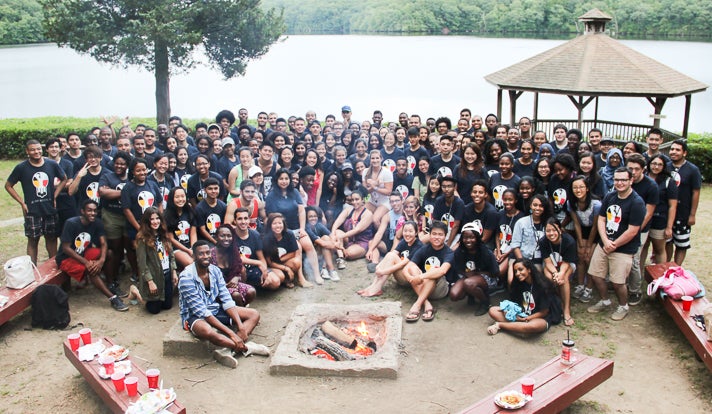 One of four pre-orientation programs offered to incoming students, Cultural Connections (CC) is designed to introduce freshmen to Yale’s cultural resources as well as to help them explore the diversity of student experiences on the Yale campus, with an emphasis on the experiences of traditionally underrepresented students, and issues related to racial identity.

“We are really helping these students with their transition to Yale,” explained co-head counselor Vanessa Noelte, a senior in Ezra Stiles College. “My freshman year, I don’t know how I would have done the transition without CC, and CC really offered a ton of valuable information about the school that made me feel more confident my first few days on Old Campus. I am so excited to be a resource for these students and have already had conversations where I was able to influence a potentially bad decision because of my experience base here.”

The program began in the 1970s as the Puerto Rican Orientation Program but quickly grew to incorporate other students of color and became known as the Pre-Registration Orientation Program. In 1999, it was renamed Cultural Connections, and in 2004, it was opened up to all students — not just those from underrepresented groups.

Christopher Cutter, a senior advisor at the Yale College Dean’s Office, directed the program for the first time this year with the help of 23 aides, upperclassmen who serve as program staff and provide guidance and support for the program participants. Aides have generally participated in the program as freshmen, although that is not a requirement.

Jinchen Zou, a sophomore in Calhoun College, said she decided to apply to be an aide this year because she “wanted to pay it forward and offer the freshmen the same experience I had, if not better, as a good counselor.” Abdul-Razak Zachariah, a junior in Timothy Dwight College, decided to return again as an aide because he is able to “interact with and become close with a wave of students who truly want to learn more about themselves and others without a hostile environment.”

“Yale is not scary, but it can be very politically and socially charged at times when people get to talking about issues of identity, lifestyle, or policy in an open context,” he continued. “I wanted to make sure the freshmen that I interacted with felt entirely comfortable being unapologetically their happiest and best selves while also being cognizant of varying, and even highly opposing, views.”

The open nature of discussions is what drew freshman Mariano “Sonny” Stephens to apply to Cultural Connections over the other pre-orientation programs.

“I was considering FOOT, but it seemed not quite as useful for me personally in acclimating to the Yale atmosphere,” Stephens explained. “Cultural Connections seemed to be a more relaxed and enjoyable experience.”

The weeklong program includes a variety of activities for students, including discussions with faculty experts on the concepts of ethnicity, nationality, and race; presentations on campus life by students; and group visits to local points of interest such as the Yale College cultural centers, and local and university museums and parks.

A popular session was the “Journey Maps” activity, where students compose a graphic visualization of their life story and then present it to their CC group. Folasade Kammen, a freshman from Oakland, California, found sharing her experience to be “incredibly therapeutic.”

“I have never written down my story so blatantly, and have certainly never shared it with other people,” she said. “It was incredibly therapeutic to finally just share such personal things about myself, but I also learned so much about my peers. Every person in the room has a struggle that they are actively working on. It was a such an incredible experience to remind myself that everyone is human, everyone has a story, and outside appearance doesn’t necessarily mean that a person is doing well on the inside.”

The annual Poetry Jam, which included performances by three New York-based poets, was another activity where students were encouraged to share their life experiences. After the three guest poets performed pieces about growing up, relationships, and identity, students were invited to share any pieces they may have written. Cutter says witnessing the students’ “unique talent and courage” was his favorite part of the program.

Stephens recounted his own experience reading his poem for the first time to a larger group: “Going into the Poetry Jam, I was incredibly nervous, but as I began to recite my poem, I got the feels and started essentially free-styling it. Everyone really understood what I was saying, and being up there and expressing myself was incredibly liberating.”

The aides themselves also find mentoring the freshmen to be a rewarding experience, citing the strong friendships and bonds formed in that first week at Yale.

“I just love being able to see them around campus and serving as a wonderful mix between friend and mentor, if they want to maintain that relationship for the long-term,” Zachariah said. “I can’t stop smiling when I see my kids doing something anywhere on campus because knowing their backgrounds makes me more proud of the fact that they will succeed at Yale, with or without my helping hand.”

It is a sentiment shared by CC participants. Stephens called the counselors his “dear friends” and said that he knows the friendships he formed will continue to carry him through his four years at Yale.

Zachariah noted that the most important lesson he hopes the students learn is how to express themselves about their identity and culture.

“One student explained to me that they view their culture as the culture that they immediately live. That idea struck me as so beautiful and almost too obvious to not be known by the world,” he said. “We love making sure our participants are connected to ethnic and racial culture, while also fostering conversations on politics, geography, sexual orientation, gender roles, and more. But, at the end of the day, we really just want them to know that their culture and personal strength comes most from what they immediately identify with and feel love for. They represent certain cultures just as much as they build new ones for themselves, friends, and families; that is worth celebrating in CC and we try to spark that celebration for these kids.”