Seeing the forest and the trees, all 3 trillion of them 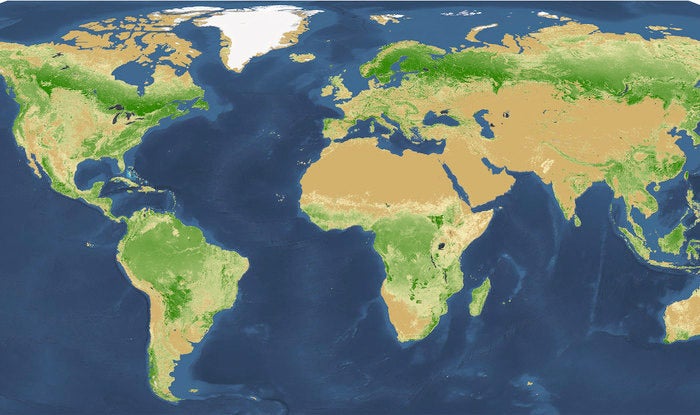 A new Yale-led study estimates that there are more than 3 trillion trees on Earth, about seven and a half times more than some previous estimates. But the total number of trees has plummeted by roughly 46% since the start of human civilization, the study estimates.

Using a combination of satellite imagery, forest inventories, and supercomputer technologies, the international team of researchers was able to map tree populations worldwide at the square-kilometer level.

Their results, published in the journal Nature, provide the most comprehensive assessment of tree populations ever produced and offer new insights into a class of organism that helps shape most terrestrial biomes.

The new insights can improve the modeling of many large-scale systems, from carbon cycling and climate change models to the distribution of animal and plant species, say the researchers.

“Trees are among the most prominent and critical organisms on Earth, yet we are only recently beginning to comprehend their global extent and distribution,” said Thomas Crowther, a Yale Climate & Energy Institute postdoctoral fellow at the Yale School of Forestry & Environmental Studies (F&ES) and lead author of the study.

“They store huge amounts of carbon, are essential for the cycling of nutrients, for water and air quality, and for countless human services,” he added. “Yet you ask people to estimate, within an order of magnitude, how many trees there are and they don’t know where to begin. I don’t know what I would have guessed, but I was certainly surprised to find that we were talking about trillions.”

The study was inspired by a request by Plant for the Planet, a global youth initiative that leads the United Nations Environment Programme’s “Billion Tree Campaign.” Two years ago the group approached Crowther asking for baseline estimates of tree numbers at regional and global scales so they could better evaluate the contribution of their efforts and set targets for future tree-planting initiatives.

At the time, the only global estimate was just over 400 billion trees worldwide, or about 61 trees for every person on Earth. That prediction was generated using satellite imagery and estimates of forest area, but did not incorporate any information from the ground.

The new study used a combination of approaches to reveal that there are 3.04 trillion trees — roughly 422 trees per person.

Crowther and his colleagues collected tree density information from more than 400,000 forest plots around the world. This included information from several national forest inventories and peer-reviewed studies, each of which included tree counts that had been verified at the ground level. Using satellite imagery, they were then able to assess how the number of trees in each of those plots is related to local characteristics such as climate, topography, vegetation, soil condition, and human impacts.

“The diverse array of data available today allowed us to build predictive models to estimate the number of trees at each location around the globe,” said Yale postdoctoral student Henry Glick, second author of the study.

The resulting map has the potential to inform scientists about the structure of forest ecosystems in different regions, and it can be used to improve predictions about carbon storage and biodiversity around the world.

“Most global environmental data is thematically coarse,” said Matthew Hansen, a global forestry expert from the University of Maryland who was not involved in the study. “The study of Crowther et al. moves us towards a needed direct quantification of tree distributions, information ready to be used by a host of downstream science investigations.”

The highest densities of trees were found in the boreal forests in the sub-arctic regions of Russia, Scandinavia, and North America. But the largest forest areas, by far, are in the tropics, which are home to about 43% of the world’s trees. (Only 24% are in the dense boreal regions, while another 22% exist in temperate zones.)

The results illustrate how tree density changes within forest types. Researchers found that climate can help predict tree density in most biomes. In wetter areas, for instance, more trees are able to grow. However, the positive effects of moisture were reversed in some regions because humans typically prefer the moist, productive areas for agriculture.

In fact, human activity is the largest driver of tree numbers worldwide, said Crowther. While the negative impact of human activity on natural ecosystems is clearly visible in small areas, the study provides a new measure of the scale of anthropogenic effects, highlighting how historical land use decisions have shaped natural ecosystems on a global scale. In short, tree densities usually plummet as the human population increases. Deforestation, land-use change, and forest management are responsible for a gross loss of over 15 billion trees each year.

“We’ve nearly halved the number of trees on the planet, and we’ve seen the impacts on climate and human health as a result,” Crowther said. “This study highlights how much more effort is needed if we are to restore healthy forests worldwide.”

Yale Forestry &amp; Environmental Study's Thomas Crowther talks about the study to map the world's trees.
Related story:
Seeing the forest and the trees, all 3 trillion of them