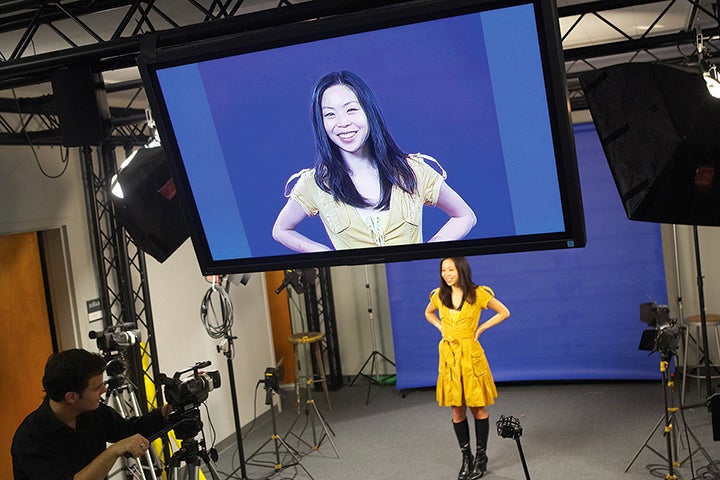 This past April the alabaster exterior of the Beinecke Rare Book and Manuscript Library transformed into an illuminated canvas for the “Lux: Ideas Through Light” projection festival. The project was one of the latest intersections between art and technology at Yale — other examples of which include a massive LED canvas at the engineering café Ground, showcasing student-made videos, and the Center for Engineering Innovation and Design, where a film composer used a 3D printer to build his own instrument.

One of the first Yale entities to support such cross-disciplinary collaborations is the Digital Media Center for the Arts (DMCA). Formed in 1998, the DMCA (located at 149 York St.) is a research hub for hands-on art production that equips Yale students — regardless of their majors — with essential skills needed to communicate in a 21st-century creative economy.

The DMCA began as a cutting-edge facility that bridged traditional arts production with then-emerging digital technologies. In its early years the center focused on support services, such as creating a digital media database for the history of art department. As digital tools have become fully integrated into daily life, the DMCA is re-imagining its role as a center where students can use digital tools for art-making and expression.

“Today there are resources for digital production of various kinds all over campus,” said Johannes DeYoung, who became director of the DMCA in August. “Our new challenge and opportunity is to see how the DMCA fits into this broader landscape and to support new fields.”

DeYoung’s own work in digital media makes him particularly suited to address the challenge. A graduate from the Cranbrook Academy of Art, he worked with moving images and digital production in the painting program. “Since that time, moving image has been the core of my practice,” he said.

In 2008, De Young was appointed to a faculty position in the School of Art as a critic in film, video, and interdisciplinary studies. In 2014 he also joined the School of Drama faculty as a lecturer in Wendell Harrington’s projection design program. Last year he taught the school’s first animation studio class, which he described as “hugely fun.”

“This is an exciting moment for the DMCA with Johannes at the helm,” said Susan Cahan, associate dean for the arts. “He will guide the center’s development as a unique campus resource aligned with the needs of Yale students and faculty artists and in sync with the evolution of digital art and ideas.”

Where art and technology meet

The DMCA houses a production studio and three labs for digital media creation, as well as facilities for production equipment rental. It also serves as a resource hub to connect students with other tools for digital production and fabrication across campus. A staff of faculty and student advisers serves more than 800 students and 100 staff and faculty members each year from the arts professional schools, undergraduate programs, museums, and student organizations like the Yale Film Alliance.

DeYoung sees projects investigating time-based media — anything that unfolds over time, including video, sound art, film, and animation — as the type of endeavor that DMCA can and should support. He also noted that the School of Drama’s new projection design program, the School of Art’s undergraduate filmmaking concentration, and the computing and the arts major — tying computer science and the arts schools together — are areas ripe for collaboration.

“We want to bring people from all facets of campus together in a truly collaborative experience,” he said. “I see the DMCA as being a place for open, broad exploration.”

Professor Ronald Gregg, a senior lecturer and programming director in the film studies program, and director of film programming for the Whitney Humanities Center (WHC), will be working with the DMCA this coming semester on a series of workshops that cover a range of film-related subjects, including an editing workshop with Geof Bartz, supervising editor for HBO Films; a master class on the “pitch” with production designer Alan E. Muraoka, who works in film, theater, and opera; and a hands-on workshop on film directing with writer/director Gabrielle Demeestere.

“Since I bring in a number of film professionals to screen and discuss their films, it makes sense to set up master classes, hands-on workshops, and other approaches to teaching students about the craft, in addition to a conversation about a single film,” he said.

DeYoung said his team is looking forward to working with the curricular programs across Yale — including the WHC’s filmmaker program — bringing together leading arts innovators in moving-image, design, and multi-media production with the Yale student community.

“The DMCA can engage these communities in hands-on making and learning, specific to all kinds of art production at Yale, which makes the center unique in that respect,” said DeYoung.

Students who have worked with the DMCA have gone on to have careers as artists, historians, filmmakers, educators, researchers, game designers, and musicians.

“It’s a very wide area of opportunity. And now that we’re talking about projection design, we’re seeing a specific group of designers that go into theater venues and public venues,” said DeYoung, noting that Yale’s projection design program is leading the field in theory and practice.

Changing technologies and the future

While the DMCA has kept up with ever-changing technology, DeYoung is quick to point out that it is not the focus of their activities.

“We’re in a place of change, but technology is a tool in the way that a paintbrush is a tool: It’s a means to an end, and ours is artistic creation,” he said. “We’re nimble and can adapt, but our focus is on the production itself, and making an environment that fosters creativity and exploration through openness and inclusion.”

Gregg noted that new tools and technology such as lightweight, inexpensive cameras; computer software for special effects and music making; and sophisticated editing programs have changed the landscape for students who want to work creatively in multiple areas.

“Increasingly, theater directors want digital sets, digital effects, and moving images in their productions; artists want to move between digital painting and filmmaking; filmmakers want more sophisticated tools for post-production coloring, compositing, and special visual and aural effects,” he said. “Digital technology has led us to a world that easily feeds cross-disciplinary interests. The DMCA recognizes this and wants to support these interests and have a sense of future possibilities in technology and creativity.”

To aid students and faculty in these endeavors, the DMCA staff includes a technical specialist and approximately 15 student computing assistants who help manage the daily operations of the facilities. The center is also creating a new position for a postgraduate associate.

The center’s faculty advisory board includes representatives from the professional schools of architecture, art, and drama, as well as from Yale College. The DMCA will also host periodic student forums to allow for direct student input into program assessment, development, and refinement.

“I’m hugely optimistic about the direction the center is going to take over the next few years. We have terrific colleagues and relationships, and I’m hopeful that we can continue to grow and build new relationships with individuals and groups across Yale,” said DeYoung. “I want the experiences and resources here to be equitable and open to the community, for this to feel like a safe and inclusive environment to make work, take risks creatively, and try new things.”