While you were away: Yale's top summer stories revisited

Even as students took a break from academics, Yale remained as busy as ever this summer. From new faculty appointments to repurposing a miracle arthritis drug to Connecticut’s largest U.S. naturalization ceremony, there was plenty to talk about since Commencement. Catch up with some of the summer’s hottest stories and discover new ones at YaleNews. 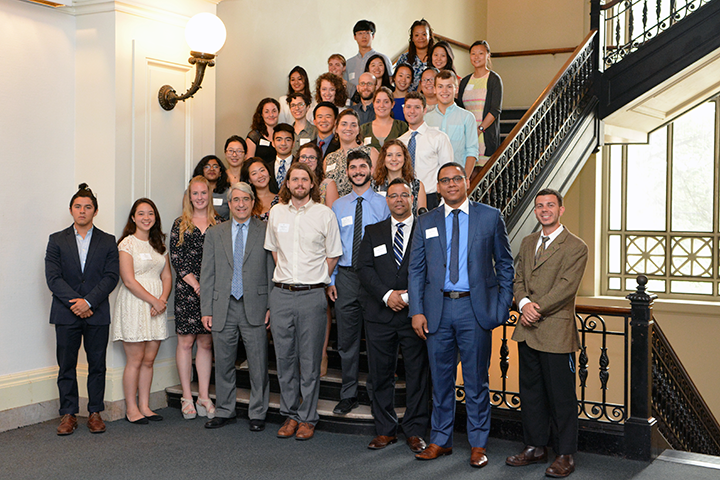 Ann Kurth, expert in global health, to be the next dean at Yale School of Nursing

Sarah E. Insley to be next dean of Branford College

Dr. Hal Blumenfeld as the Mark Loughridge and Michele Williams Professor of Neurology

Elizabeth H. Bradley as the Brady-Johnson Professor of Grand Strategy

Margaret Clark as the John M. Musser Professor of Psychology

Jung Han as the Norton Professor in Technological Innovation

David Skelly as the Oastler Professor of Ecology

George H.W. Bush honored by student leaders with an award for lifetime achievement

Elimelech wins 2015 Eni Award for ‘Protection of the Environment’

From service to school: Yale to partner with Vetlink to strengthen pipeline of veterans to college

Alumnus Karl Franz Williams to raise Anchor once again (the bar, that is)

Audubon’s ‘Birds of America’ at Yale: creating a masterwork one feather at a time

Warrior-Scholar Project: From the battlefield to the classroom

Psychologist’s memoir is a tale of misdiagnosis, mistreatment, and healing

You’d never know it wasn’t Bach (or even human)

Best dads on the planet? Let’s start with these little guys

For astronomer, an insect is as worthy of observation as the cosmos

Astronomers find a massive black hole that outgrew its galaxy

Study reveals what the world thinks of climate change

Study reveals what the world thinks of climate change

Chronicles of disaster: Hiroshima in the Yale University Library archives

Obamamania in Kenya: the view from Nairobi

Douglas McKee and Edward O’Neill: learning a thing or two from the Teach Better Podcast

Joanne Freeman: The Redcoats are coming — to New Haven, that is

John Mack Faragher: on gunfights, U.S. colonialism, and studying the American West on the East Coast

Eitan Hersh: how campaigns use data to target voters