Summer programs bring together students and alumni to build career networks in D.C. and beyond 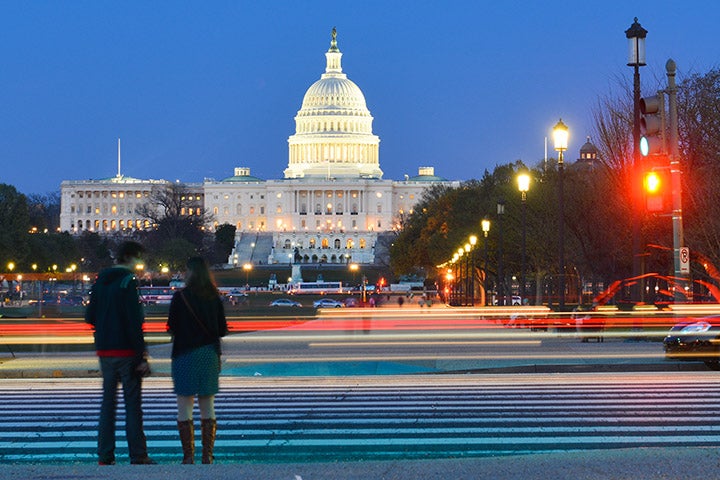 Every year, the Office of Career Strategy (OCS) coordinates events for Yale students working and living in the summertime in New York City, San Francisco, and Washington, D.C. These efforts began in 2005 with the Yale in Washington, D.C. program, which has become a full-feature extracurricular program for the hundreds of Yale undergraduates and recent graduates spending their summers in the nation’s capital.

To mark the program’s first successful decade, this year’s student director, Abrar Omeish ‘17, collaborated with Yale alumni in the D.C. area for a gala celebration on July 30, sponsored by OCS. More than 200 Yale students, alumni, and friends of the program attended the gala, held at The Metropolitan Club in D.C. Special guests included Yale Professor Akhil Reed Amar ’80 ’84 J.D. and Margaret Warner ’71, a former trustee of Yale and chief foreign correspondent of the PBS NewsHour. Nelson Cunningham ’80, a co-founder of the Yale in D.C. program, introduced Amar and Warner who engaged in an interview-style discussion of Amar’s new book “Law of the Land”and highlighted the relevance of a Yale education for service to the nation. U.S. Senator Sheldon Whitehouse ‘78 of Rhode Island, a participant in previous years’ programming, offered remarks on the relevance of his Yale education to his career and the relevance of government and politics to universities.

Jane Edwards, senior associate dean of Yale College and dean of the Center for International and Professional Experience, represented Yale campus leadership at the event, which also drew leaders of the Yale Club of Washington, D.C., including Kimberly Nelson, the group’s executive director, and Robert Cole ’75, a vice president of the club’s board of directors. Other notable guests included

Omeish, who began her work as student director at OCS in April, said, “The success of the gala is a testament to the potential of Yale growth in the district, and to the commitment of its affiliates to mentorship and learning.” When Yalies who have been entrusted with power and status “have the character to remember the chance and luck that brought about their achievements” and the people who helped them along the way, she said, “[W]e find ourselves curating a program that furthers students’ careers and brings alumni back to serve others and to reconnect with the university. I hope that we can continue to understand the value of forging the legacy and networks of Yale Summer Events in Washington, D.C. while reminding each other of the blessings we have in belonging to such an institution.”

“I can’t help but burst into a huge smile while reminiscing about my time at the D.C. gala,” said Russo of the WCS. “The great crowd, fun vibe, and inspiring panel discussion created a magical summer moment for all.” Russo said she enjoyed reconnecting with the Women in Government Fellows, Yale undergraduates interning in D.C. this summer, who participated in the campaign school program on campus at the beginning of the summer. She noted, “They were all very grateful for their experience at the Women’s Campaign School at Yale which helped prepare them for their time in D.C. Old Blue sure got its groove on that night!”

Azeezat Adeleke ‘17, a Women in Government fellow, said of the celebration, “There was so much warmth in that room — seeing old friends from campus, new friends from the summer, and being surrounded by people of all stripes who share the singular experience of being a Yalie. At one point, as some of the alumni were describing what they are doing now, I turned to my classmates and said, ‘Wow, is that going to be us in a few years?’ We were just so impressed by the contributions they’re making to this country: as elected officials, as public servants, as journalists, as academics, as business leaders, and much more.”

“The Yale Summer Events program in Washington, D.C. is our longest-standing summer program,” said Jeanine Dames, associate dean and director of OCS at Yale, “providing Yale students with substantial opportunities to build community and engage with alumni. Similar programming now happens also New York City and San Francisco, thanks to support from the President’s Office, Yale College Dean’s Office, OCS, the Women in Government Fellowship, and the Law School. The Yale Summer Events are among the most successful programming hosted by OCS and are a wonderful way for alumni to get involved and give back at every stage of their career.”

Student directors, hired and supervised by OCS, are a key element to the program’s success in organizing career-related, cultural, political, and social events to help students connect with each other and alumni, according to Stephanie J.L. Waite, assistant director at OCS and Yale Summer Events program manager. “Student directors have the autonomy to carry out programs that align well with student and alumni populations, and that introduce Yalies to key opportunities present in their respective cities,” Waite says. “This summer, students interning in San Francisco met with start up organizations and tech-focused companies, students in New York spoke with representatives from the New York Times, Goldman Sachs, and major law firms, and students in Washington, D.C. engaged in conversations with leading policy experts and White House officials — all emblematic of OCS’s commitment to encourage authentic and meaningful networking.”

Reflecting on what it was like when he was a student, Cunningham said, “Thirty-five years ago as a summer intern in Washington, we had no way of meeting other Yalies — and certainly no way to get to know any of Yale’s prominent alums. Thanks to the Yale Summer Events in Washington, D.C. program, every intern can come away from a Washington summer with that most invaluable of assets: a network. And, alums have a way to connect with the University and the students in a way that is so much more meaningful.”