President Peter Salovey is the recipient of the 2015 Outstanding Contribution Award by a Senior Professional from the Division of Health Psychology, the American Psychological Association (APA) announced at its annual convention on Aug. 8. 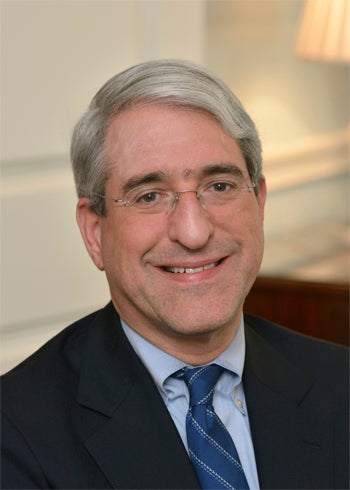 The annual award is given to an APA Division 38 member who earned his or her terminal degree over 10 years ago.

Salovey is a “particularly deserving recipient” of the award, said Jerry Suls, a professor of psychology at the University of Iowa who nominated Salovey for the award, at the presentation ceremony.

“In fact, the organization has been delinquent in not bestowing this award on him previously, in light of his myriad of contributions to health psychology,” Suls continued. “Fortunately, this oversight is remedied today. It’s actually easy to see why he was missed. He is so prolific and has contributed so deeply and broadly that he has functionally become ‘hidden in plain sight.’”

Salovey’s body of work includes 13 authored or edited books, which have been translated into 11 languages, and more than 350 peer-reviewed articles or chapters. Along the way, he earned 19 awards and received honorary degrees from the University of Pretoria, Shanghai Jiao Tong University, National Tsing Hua University, and, most recently, Harvard University. In 2013, Salovey was elected to the American Academy of Arts and Sciences and to the Institute of Medicine of the National Academies.

With John D. Mayer, he developed a broad framework called “Emotional Intelligence,” the theory that just as people have a wide range of intellectual abilities, they also have a wide range of measurable emotional skills that profoundly affect their thinking and actions.

Suls also cited Salovey’s contributions to the effects of informational framing, particularly in optimizing the effectiveness of public service announcements, saying: “When is it optimal to use an appeal that emphasizes costs versus benefits? What attributes of recipients should be used to tailor the persuasive communications? This research has involved a large range of samples, but most notable are [Salovey’s] programmatic interest in exploring different communication routes and engaging inner-city and other under-served populations in field settings.”

Suls concluded by noting Salovey “‘talks and walks the talk’ with respect to health disparities and underserved populations, and has elucidated the role of tailoring in theory-based programs and interventions. He is a ‘superstar role model’ and embodies the spirit, vision, and accomplishment associated with the founders of the field.”

After receiving an A.B. (psychology) and A.M. (sociology) from Stanford University in 1980 with departmental honors and university distinction, Salovey earned three degrees in psychology at Yale: an M.S. (1983), M.Phil. (1984), and Ph.D. (1986). Since joining the Yale faculty in 1986, he has studied the connection between human emotion and health behavior, and played key roles in multiple Yale programs including the Health, Emotion, and Behavior Laboratory, which Salovey founded and is now called the Center for Emotional Intelligence; the Center for Interdisciplinary Research on AIDS; and the Cancer Prevention and Control Research Program. He is currently the Chris Argyris Professor of Psychology and holds secondary faculty appointments in the Schools of Management and Public Health, the Institution for Social and Policy Studies, and the Department of Sociology.