Obamamania in Kenya: the view from Nairobi 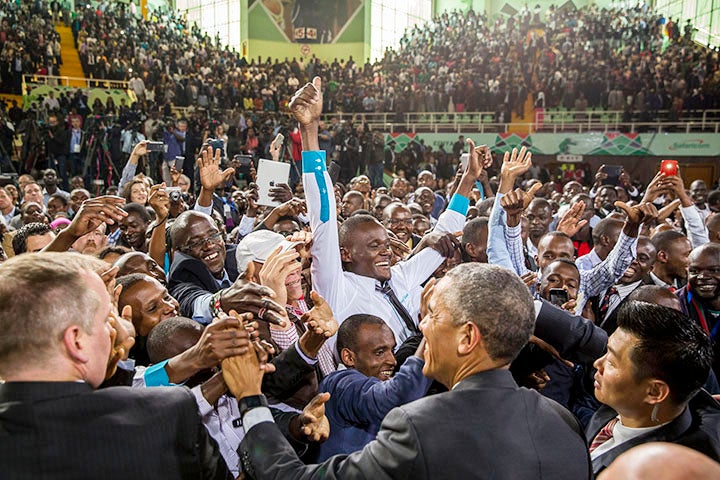 Eddie Mandhry is the director for Africa in the Yale Office of International Affairs, where he is responsible for supporting the university’s Africa initiatives, working with faculty to develop strategic partnerships between Yale and African institutions in the private and public sectors, and supporting recruitment activities around the continent. A Kenyan national, he was back in his home country when President Barack Obama visited. Here, Mandhry shares his own thoughts about the presidential visit and reflections from three Yale alumni in Kenya.

President Barack Obama recently made a three-day visit to Kenya, principally to open the 6th Global Entrepreneurship Summit (GES), the first such summit to be held in sub-Saharan Africa. His trip to Kenya was historic for several reasons: He is the first serving U.S. president to visit the East African nation, as he poignantly noted, he is the first Kenyan American to be elected president of the United States.

Yale alumnus Dr. Patrick Njoroge ’93 Ph.D., governor of the Central Bank of Kenya, stated, “The Global Entrepreneurship Summit 2015 and President Barack Obama’s visit to Kenya have the potential to be transformative. The spotlight has been put on what can shape Africa’s future – innovation, youth inclusion, private sector, and markets – rather than on the problems that continue to hamper progress.”

This visit was nothing like Obama’s first trip to Kenya in 1988 as a law student. His status and heritage generated an unprecedented and electric atmosphere that swept a nation that has seen its share of divisive ethnic politics. The extent to which his visit galvanized the nation was nothing short of remarkable as, political theatrics and tribal allegiances were set aside to welcome Kenya’s greatest son to the land of his father.

As one commentator observed, even a form of “Obamacare” visited Kenya. In preparation for his arrival, Nairobi city roads were carefully repaved, flowers and grass transplanted, American flags raised, banners printed, “Welcome Home Obama” billboards mounted, pavement scrubbed, and garbage collected. Kenyans watched in awe as their burgeoning capital city was given an emergency facelift by hundreds of council workers hastily deployed to undertake a monumental cosmetic transformation with surgical precision and never-before-seen speed. If anything, Nairobi’s oft-criticized City Council demonstrated its capabilities, an inadvertent demonstration of competence many Kenyans will expect them to live up to after Obama’s departure.

Beyond the hysteria, Obama’s visit to Kenya was significant for several reasons. First, as he noted, “Africa is on the move.” A continent of 54 nations and over 1 billion people, it is experiencing an era of profound economic transformation. The average regional GDP growth of 5% per annum is ahead of every other region in the world.  A closer look at the numbers reveals the continent still faces the critical challenge of promoting inclusive growth that doesn’t exacerbate inequality and deprivation at the bottom of the pyramid.

Second, his visit showcased Africa’s youth and how they are a competitive advantage. Africa is the most youthful continent, with 65% of its people under the age of 35. It is imperative that the optimism, aspirations and dynamism of the continent’s youth are harnessed to spur greater economic growth. This will require massive investments in skill development, education and training, as well as increased support for small to medium enterprises, easier access to uncollateralized start up capital, and the provision of a business friendly enabling environment with good infrastructure, sustainable energy supplies, and coherent regulatory frameworks.

Third, there have been great strides in the areas of governance and democratic participation, seen most powerfully in the recent successful election and transfer of power in Nigeria, the continent’s most populous country. Meanwhile, four African nations – Rwanda, Senegal, Seychelles, and South Africa – are among the 10 countries with the highest percentage of women in their parliaments. Of the 46 countries in the world where women comprise at least 25% of national legislators, 14 are in Africa. Yale recently launched the Network of African Women Leaders in partnership with Women for Africa Foundation and Banco Santander Universities. The program convened an exceptional group of African women leaders working to effect positive change in their respective countries.

Fourth, as Obama noted in Kenya and highlighted further in his subsequent address to the African Union in Addis Ababa, Ethiopia, there is growing African regional integration, setting the stage for better engagement in the globalized economy.

Kenya encapsulates both the promise and the challenges of this great movement. It is no surprise that Kenya was selected to host the GES 2015. In many respects Kenya leads the way, thanks to the creativity and ingenuity of her people. Not to be passed up by a profiteering opportunity, Nairobi’s enterprising street side hawkers peddled newly printed flags, Obama t-shirts, and other commemorative memorabilia with which they snake through traffic during the morning and afternoon rush. More permanently, Kenya’s pioneering M-Pesa mobile money transfer service has revolutionized commerce; Equity Bank has brought financial services to millions of unbanked poor; the crowd-sourcing platform Ushahidi has changed how we hear about and respond to crises; and iHubhas served as a hotbed of innovation by cultivating talented IT innovators and disruptive social entrepreneurs.

“President Obama’s visit to Kenya on the occasion of GES was a very powerful message about Africa’s status as young, dynamic continent that can power continent-wide and global growth,” Yale alum, Aida Sykes ’07, told me. “As an employee of Jumia, a start-up with European roots that has taken a bet on African entrepreneurship, I see firsthand the alchemy that occurs when smart, hardworking Africans are equipped with technology, systems and data. Listening to President Obama on Sunday, I felt enormously grateful to be back in Africa at this wonderful moment in time.”

Wilmot Allen ’89, the Nairobi-based director for East Africa at CrossBoundary, LLC, agrees with Sykes, telling me he views Obama’s visit as “both an exclamation point and catalyst.” Allen says the visit has given international attention to Kenya and the region’s stronger economies and growing middle class.

“This will hopefully nudge international investors who have not looked closely at Kenya and sub-Saharan Africa to reconsider,” he says. “In this way, President Obama’s presence at GES frames the event as an exclamation point for the attractiveness of the host country as investment destination. The catalyst opportunities have to do with the event facilitating greater investment in enterprises led by women entrepreneurs ($1 billion was pledged in support at GES), talent development in the tech sector, and increased support of social entrepreneurship and social businesses that can effectively address human development challenges.”

Africa is on the move. Obama’s visit helped more of the world to recognize the movement and encouraged young Africans to keep the momentum going.