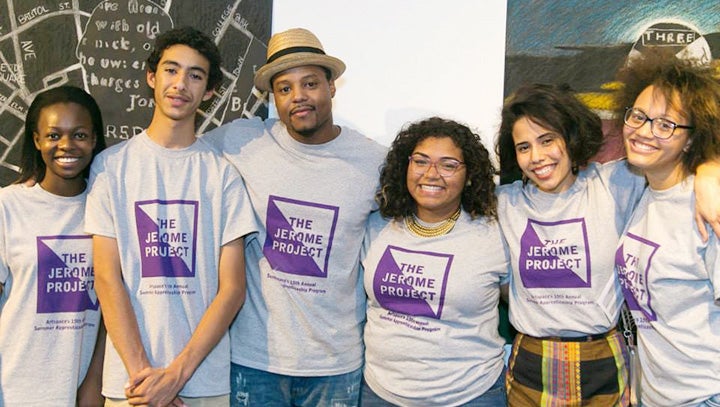 “Art can change the world,” says alumnus Titus Kaphar ’06 M.F.A. He believes this because it changed his world, providing him with a way to understand history and society, develop his talents, and share knowledge. It’s a belief he brings both to his studio and to the neighborhoods of New Haven.

For years Kaphar has shown through his art that black lives matter. Now he is helping a new generation find its artistic voice, contributing to the local creative community and inspiring young artists at Artspace in the Ninth Square and throughout New Haven — even as his art gains growing national notice in museums and the media.

“I started realizing very early on that, as a painter, when I was doing portraits, everything I was doing was like an illusion,” he told a group of young people and their parents in late May at a Newhallville community celebration. “If I paint a picture of you, you’re not actually there. There is nothing there. It is a flat canvas. And so, when I started thinking about how I wanted to talk about the history of art, I wanted to do something that was a little bit more physical.

“The physicality of the work became a really important thing,” he continued. “I didn’t want to just paint pictures anymore. I wanted to do something that felt like what I was experiencing.” He recalled wondering: Rather than make a painting about torture, what might it mean to torture a painting?

That question, he said, changed his work. He began cutting up paintings, dipping paintings in tar, and “all kinds of crazy things.” It was both scary and liberating, said the artist, and he began to develop a practice that allowed him to convey more effectively what he felt.

The intersection of societal interrogation, art history, and technical physicality found expression in Kaphar’s recent series “The Jerome Project” It was exhibited for four months at the Studio Museum in Harlem and was the foundation for his work this summer with Artspace. (See related story.)

See a slideshow of works by Titus Kaphar

Artspace, on its website, describes the project’s genesis: “Kaphar began this investigation in 2011, when an online search for his father turned up mug shots of 99 incarcerated African American men with the same first and last name.  Since 2013, Kaphar has drawn from this revelatory moment to account for larger issues around the depiction of black men and youth in the news and media, exploring how these images shape the criminal stereotype, and perpetuate a culture of fear founded on distance and ignorance.”

The Studio Museum’s exhibit of the work, organized by associate curator Naima J. Keith noted: “The artist was influenced by the writings of Michelle Alexander and William Julius Wilson on the prison-industrial complex and the use of policing and imprisonment by the US government as a means to address economic, social and political problems … Although each work depicts an individual, this series represents a community of people, particularly African-American men, who are overrepresented in the prison population. … With their gold-leaf backgrounds and single central figures, Kaphar’s portraits visually parallel Byzantine holy portraits, specifically those depicting Saint Jerome, the patron saint of librarians and scholars.”

It’s been a busy year for the artist. In addition to the Studio Museum show, he had dual exhibitions, “Drawing the Blinds” and “Asphalt and Chalk,” at the Jack Shainman Gallery in New York City. In January, Kaphar was honored with a 2015 Creative Capital Artist award. His work “Yet Another Fight for Remembrance,” was featured in Time Magazine’s Person of the Year issue. The Museum of Modern Art and other collections have recently acquired his work. Kaphar’s “The Vesper Project” is currently on view at the Contemporary Arts Center in Cincinnati through Oct. 11 as part of a tour that continues through 2016 with stops in New Britain, Washington, D.C., and Philadelphia. A Village Voice headline on Feb. 4 proclaimed, “Titus Kaphar Sets Out to Comment on History and Winds Up Making It,” in which critic and curator Christian Viveros-Fauné wrote, “few pieces I’ve seen this decade prove as moving or guileful.”

Kaphar’s critical success comes as no surprise to those who have known him best since he came to New Haven more than a decade ago to study at the Yale School of Art.

Sam Messer, professor of painting and associate dean of the school, observes: “Titus Kaphar came with a serious traditional tool set of representation already in place. His curiosity and determination to be more and do more led him to create opportunities and make connections across the university, including at the Yale University Art Gallery. These experiences pushed him down the path of investigation that has informed his current work.”

Describing his Yale years, Kaphar said, “My life experience was completely different from everybody else in my class. But I was around people who loved art, who believed in art, and who encouraged me to keep going.”

The artist has said that one constant about his work is that while it speaks to and about history and society, “I don’t make anything unless it starts inside.”

If his work is fundamentally personal, Kaphar has an equally fundamental commitment to community. Messer observes, “He became engaged with New Haven while a student and returned shortly after his residency at the Studio Museum to make a home here. While always extremely competitive, Titus has always put his work, family, and community before the standard idea of the path a young artist should follow.”

Most recently, he and New Haven theater artists Aaron Jafferis and Dexter Singleton collaborated with 18 students in the Summer Apprentice Program at Artspace to create new work inspired by “The Jerome Project.” The program is the prototype of a “post-master’s” program Kaphar is developing for recent art school graduates to live, work, and develop in New Haven — just as he has done.

The crux of post-masters program, Kaphar says, is “not just artists simply making work that goes out into the art world, where people sort of bid and barter for our products as if they were some sort of commodity, but creating situations that would allow those artists to build relationship with students to really impact their life through art making.” One of the first artists to serve as a mentor in the program was Camille Hoffman ’15 M.F.A.

“We are truly grateful that Titus Kaphar sought to root his evolving Jerome Project in his home town of New Haven, and bring the work out of the white box/museum space into the community. New Haven’s next generation of artists are the beneficiaries of his commitment, and we are doubly grateful that he chose to incubate his ideas at Artspace,” says Helen Kauder, the group’s executive director.

In addition to intensive mentoring with artists Kaphar, Singleton, Jafferis, and Hoffman, the 2015 Artspace summer apprentice program included visits to the New Haven Museum, the Yale University Art Gallery, and a prison. Students engaged in conversations on race, art, and the criminal justice system, and had studio time to develop their own work. According to Kaphar, some students stayed well beyond assigned program hours to pursue their learning through art. Many in the Yale community supported in the program, including Artspace designer and facilitator Jerome Harris ’16 M.F.A., Yale President’s Public Service Fellow Julia Hamer-Light ’18, art gallery educator Elizabeth Williams, and poet Ifeanyi Awachie ’15.

The summer program garnered praise from the critics who matter the most – the high school student participants. “Titus really changed my view on drawing! Before, I drew mostly stick figures. Titus showed me the ropes and told me to find my inner artist. And I did,” said Emmanuel Luck, a student at Metropolitan Business Academy. “I’ve grown so much in my three weeks of being here.” Jasmine Smith, a student at Hillhouse High School, said, “For me art is the only thing even relatively close to the freedom I wish I could have.”

He has taken up the challenge himself through the Artspace program to demonstrate how, in New Haven, art can help young people develop their language and find their voice. As his post-masters program develops further and finds a permanent home, Kaphar hopes that young voices will continue to grow and become more powerful.

The work of 18 high school students from the New Haven Public School district who collaborated with Kaphar and theater artists Jafferis and Singleton to create new work inspired by “The Jerome Project” is on display at Artspace through Sept. 13, together with “ArrestingPatterns,” an exhibition curated by Sarah Fritchey with Kaphar and Leland Moore.

The exhibition also features a reading room, where viewers may read texts, essays, and archival clippings on the impact of the criminal stereotype on prisoners, their families, and entire communities.  The exhibition will close with a free two-day conference organized by Moore, an attorney, and the Artspace staff, which will be held Saturday-Sunday, Sept. 12–13 at the Yale University Art Gallery, 1111 Chapel St. Learn more and register now.