Audubon’s ‘Birds of America’ at Yale: creating a masterwork one feather at a time

Yale owns two complete sets of the double elephant folio of John James Audubon's "The Birds of America." One is now on view at the Peabody Museum of Natural History alongside five of the original engraved copper plates used to create it.
By Mike Cummings
Share this with Facebook Share this with Twitter Share this with LinkedIn Share this with Email Print this 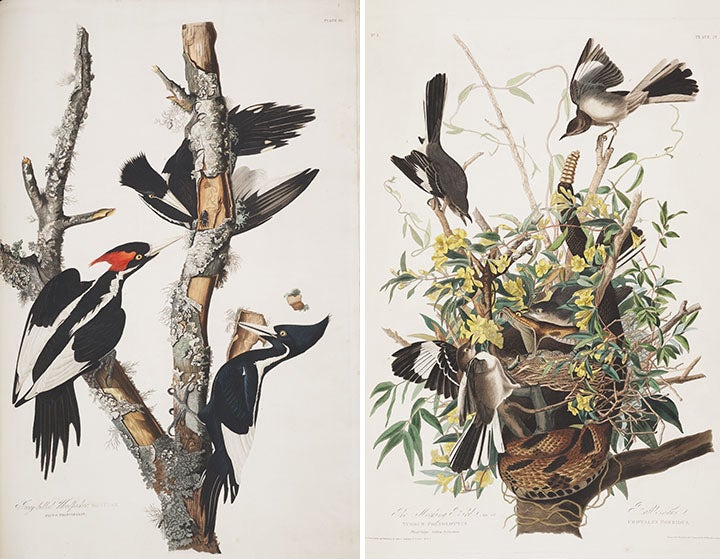 Writing from Edinburgh in December 1826, John James Audubon updated his wife, Lucy, on efforts to publish his life-size watercolors of North American birds. He was pleased with his progress.

“It is now a month since my work has begun by Mr. W.H. Lizars of this city — it is come out in numbers of 5 prints all the size of life and in the same size paper of my largest drawings that is called double (elephant) — they will be brought up & finished in such superb style as to eclipse all of the kind in existence,” he wrote in the letter now housed at Yale’s Beinecke Rare Book & Manuscript Library.

More than dozen years later, Audubon and his associates completed the double elephant folio of “The Birds of America.” His boasts to Lucy seem justified. The work is hailed as a masterpiece of printing, artistry, and ornithology.

Yale owns two complete sets of the double elephant folio — a term that refers to the work’s extraordinary size. One is now on view at the Peabody Museum of Natural History alongside five of the original engraved copper plates used to create it. The plates, among about 80 known to exist, produced prints of the following birds: the black vulture, herring gull, black skimmer, marsh hawk, and back scoter.

“As a piece of book production it is an extraordinary thing,” says William Reese ’77, a New Haven-based antiquarian bookseller and member of the Yale Library Executive Council. “The sheer physical conception of it is beyond anything tried before or since.”

“Audubon was an extraordinary figure in two ways: He was dedicated natural historian. You can’t fake that. He got out there and observed and collected a lot of bird specimens that he used to create this amazing series of publications. He was also an amazing entrepreneur,” says Prum. “His work had an enormous impact on both culture and ornithology.”

Yale’s collections of Audubon’s papers, housed at the Beinecke Library, include correspondence, journals and draft manuscripts of his work, including an incomplete manuscript of “The Ornithological Biography,” which was the companion text to “The Birds of America.”

Audubon was born in Saint-Domingue (now Haiti) in 1785, the son of a French naval officer and his Creole mistress. After his mother died while he was an infant, Audubon was brought to France and raised by his father’s wife. He developed interests in drawing and birds at young age. When he was 18, Audubon was sent to his family’s estate near Philadelphia to avoid conscription into Napoleon’s army.

He married Lucy, a neighbor in Pennsylvania, and settled in Kentucky, establishing a dry-goods store in Louisville that eventually failed. He spent years moving from Kentucky to Ohio to Louisiana pursuing various ventures before going bankrupt in 1819. With few prospects, he began his quest to paint America’s birds. He spent the next several years roaming the woodlands along the Mississippi River observing and drawing the birdlife.  He would shoot the birds and string them up into lifelike poses using elaborate armatures of wire and wood. Before modern photography, this was the surest method for making accurate drawings of wildlife.

By 1825, Audubon had gathered enough material to begin publishing “The Birds of America.” The project’s scale and complexity frightened away the few engravers in the United States equipped to make color-plate books. Audubon crossed the Atlantic with the 160 or so watercolors he had completed. William H. Lizars, a printer based in Edinburgh, agreed to take on the project. The first plate showed the wild turkey, which Audubon depicted strutting regally. Like Benjamin Franklin, he believed it should have been the national bird, says Reese.

It would take about 13 years to complete the 435 color plates that compose “The Birds of America.” Over that period, Audubon would cross the Atlantic several times and mounted expeditions in American woodlands to observe more species and make more watercolors.

The project was financed through pay-as-you-go subscriptions. Every few months, subscribers would receive a package of five prints: one large bird, a medium-sized bird, and three smaller birds. It was an expensive enterprise. A complete set of “The Birds of America” cost subscribers about $1,000. Many of Audubon’s subscribers were European aristocrats. (American subscribers included U.S. Senator Daniel Webster.) He spent much of his time in Europe courting potential subscribers in the salons of London and Paris, dressed in bearskin cloak, playing the role of the eccentric American woodsman.

“Nothing in the entire legacy of printed works equals ‘The Birds of America’ in breadth of conception, size, and difficulty of execution,” says Reese. “It’s essentially the largest book that has ever been created, in purely book production terms. The sheer physical conception of it is beyond anything has tried before or since.”

The original watercolors would be transferred onto copperplate engravings and printed in black and white. Aquatint would be added to certain plates to provide color. Then each plate was hand-painted along a kind of assembly line in which each colorist applied a specific shade. Each plate was about 40 inches tall and 28 inches wide untrimmed.

Reese says it is likely that up to 150 colorists were employed on the project at the height of production.

The 435 plates depict a total of 1,055 birds. Each plate tells a story in vibrant colors and rich details. Some of the stories are dramatic.

For example, plate 21 shows four mockingbirds battling a rattlesnake in a treetop. The snake bares its fangs. The birds look poised to defend their nest at any cost.

Such dynamic scenes provoked Audubon’s critics, who accused him of scientific inaccuracies, says Reese. Many questioned whether rattlesnakes climb trees. (They do.) Or they argued that Audubon was attributing human behavior and emotions to animals. Audubon countered that he drew the birds as he had observed them in the wild.

Reese says that while the distinguished natural history establishment in London accepted Audubon, he faced fierce critics in the United States.

“They attacked him any way they could,” he says.

The plates’ backgrounds, most of which were drawn by other artists working with Audubon, were an uncommon feature at the time. Most illustrators of natural history depicted specimens against a field of white, says Reese.

While the artwork is stylized, the most of the birds are depicted accurately, says Prum.

Reese says many of background images are wonderful botanical scenes that nicely capture the fauna of the American woodlands.

“The Birds of America” features several bird species that have gone extinct or are considered close to extinction, including the ivory-billed woodpecker, Carolina Parakeet, Bachman’s warbler, Eskimo curlew, and passenger pigeon.

The plates of “The Birds of America” contain some lingering mysteries. Plate 60, the carbonated warbler, has never been confirmed by science.

“The question is: Did it go extinct or did Audubon make it up?” Prum says.

Audubon described another bird, the chestnut-sided warbler, plate 59, as being extremely rare.

“You can see this bird every spring in migration at East Rock Park,” says Prum. “Was this bird that is relatively common today inexplicably rare back then?”

Individual subscribers were responsible for assembling the plates and binding them into volumes.

Some subscribers died and others cancelled their subscriptions, meaning there were incomplete sets created.

About 190 complete sets were produced. Many were broken up and the plates sold individually. About 120 complete sets are known to exist. Yale has two.

The copper plates on display are part of the museum’s William Robertson Coe Ornithology Library. Two other copper plates from the production of “The Birds of America,” the American woodcock and great marbled godwit, are housed at the art gallery.

The Peabody’s exhibit is on view through July 2016.