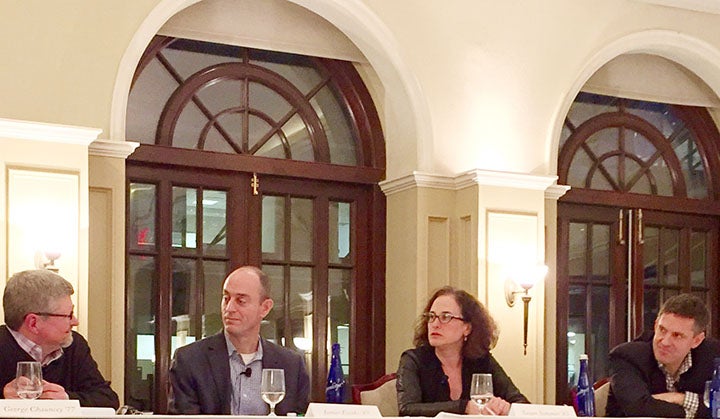 “For me, it’s exhilarating,” Margaret H. Marshall ’76 J.D. ’12 LL.D. (Hon.) told the Boston Globe on June 26, about the U.S. Supreme Court’s landmark decision in the Obergefell v. Hodges case that the Constitution guarantees the right to marriage for persons of the same sex.

Justice Anthony Kennedy’s majority opinion quoted the 2003 Goodridge decision by the Massachusetts Supreme Judicial Court, which was written by Marshall when she was chief justice of that court. The Massachusetts ruling was the first to provide same-sex marriage rights and was a key catalyst for the national movement that led to the June 26 ruling.

“The marriage ban works a deep and scarring hardship on a very real segment of the community for no rational reason,” the Massachusetts court ruled 12 years ago. “Limiting the protections, benefits, and obligations of civil marriage to opposite-sex couples violates the basic premises of individual liberty and equality under law protected by the Massachusetts Constitution.”

“This is a great democracy,” Marshall, senior fellow of the Yale Corporation, the university’s board of trustees, told the Globe. In an opinion piece published in the Globe on June 29, Marshall observed: “I am elated not because I wrote the Goodridge decision but because the Supreme Court has affirmed that same-sex couples in all 50 states have ‘equal dignity in the eyes of the law.’ How wonderful for this immigrant citizen to read those words.”

Massachusetts was the first to allow same-sex couples to marry. Connecticut became the second in 2008 and thus also “had a very important role to play” in the national movement, Anne Stanback ’85 M.A.R. told the Hartford Courant at a celebration at the state Capitol on the evening of June 26. Stanback, who will be honored in the fall by the Yale Divinity School at its annual convocation, played a key role in as the founding executive director of Love Makes a Family, the lead organization locally advocating for the freedom to marry.

“This moment has been a long time coming,” said history and American studies professor George Chauncey ’77, ’89 Ph.D. on March 5, as he moderated a discussion on same-sex marriage co-sponsored by Yale GALA, the university’s lesbian, gay, bisexual, and transgender alumni association, and the Yale Club of New York City. He reminded those gathered that the first federal marriage case had been brought by the American Civil Liberties Union (ACLU) in 1970 and was summarily dismissed by the U.S. Supreme Court at the time.

“Yalies have played such a central role” in the movement to secure marriage equality since then, and especially in the last decade, Chauncey tells the students in his lecture course. Among those he highlights are Evan Wolfson ’78, who was co-counsel in the historic 1993 Hawaii Supreme Court case that ruled prohibition of same-sex marriage was sex discrimination, and a founder of Freedom to Marry, a campaign to win marriage rights nationwide; Susan Sommer ’83, ’86 J.D., senior counsel and national director of constitutional litigation for Lamdba Legal, the nation’s oldest legal organization dedicated to LGBT civil rights; James Esseks ’87, director of the ACLU Lesbian Gay Bisexual Transgender & AIDS Project and co-counsel for the plaintiffs in Windsor v. United States, successfully challenging the Defense of Marriage Act in 2012; and Marc Solomon ’89, national campaign director for Freedom to Marry.

“A cause is either moving forward or backward, and at the heart of my job as the national campaign director for Freedom to Marry has been figuring out how to grow momentum every single day,” Solomon wrote in the Huffington Post in the wake of the Supreme Court ruling, in a post that shared 10 lessons learned in the decades-long marriage movement. He emphasized that an overarching strategy was key to the work of the group and its allies: “When Evan Wolfson embarked on winning marriage nationwide, he had a pathway to victory that envisioned a national ruling by the U.S. Supreme Court. However, to get the Court to act, he knew — based on the lessons of history — that we needed to rack up victories in a critical mass of states and grow public support beyond a majority.”

Wolfson told National Public Radio “the day of the gay exception is over. It is no longer tolerable for the law to exclude gay people from the basic dignity, protections, and respect that are part of America’s promise.”  He underscored that “this has been a debate and a discussion and a struggle that has been going on for decades.” The court’s finding, Wolfson said, “is not new, it’s not sudden, it’s not being sprung on the American people.” He emphasized that the court is in sync with the country: “the American people now by a super majority support the freedom to marry and believed that the court should do what the court did.”

Sommer was among the Yale alumni inside the Supreme Court on June 26 who wanted to hear the court decision in person. She was sitting alongside her fellow advocate, Mary Bonauto, civil rights project director at Gay & Lesbian Advocates & Defenders (GLAD), who had represented the plaintiffs in the case and had argued for them before the court, as did U.S. Solicitor General Donald Verrilli ’79. As Chauncey had noted at the March GALA event, Bonuato herself has close ties to the Yale community, as she is married to alumna Jennifer Wriggins ’80 and was the 2010-2011 winner of Yale’s Brudner Prize.

“We burst into tears” in the courtroom, Sommer told the Cincinnati Enquirer, the hometown newspaper of the plaintiffs, as “it became clear that we had not only won, but that the Supreme Court was affirming the dignity and humanity of same-sex couples and their marriages.” Sommer and her organization, along with ACLU, GLAD, and other partner organizations, will now work to make sure the Supreme Court’s ruling is effectively and equitably enforced, she noted.

“Now come the questions as to what this means on the ground. How can same-sex couples access these rights?”

“With this transformative ruling, the Supreme Court has settled once and for all that same-sex couples have the freedom to marry and to have their marriages recognized and respected throughout the country,” Sommer said in a statement issued by Lambda Legal. “Now come the questions as to what this means on the ground. How can same-sex couples access these rights? What does this mean for the couples and for their children? What about spousal benefits, taxes, and protections in the workplace? There is much to celebrate with this affirmation of the dignity, liberty, and equality of same-sex couples, and undoubtedly there will also be some questions.”

Chauncey was engaged with the case as the author of an amicus brief submitted by the Organization of American Historians (OAH). The brief focused on the history of discrimination against gays and the social changes that have brought marriage to the forefront of contemporary debate. It summarized a large body of scholarship as well as the dozens of court appearances, affidavits, and amicus briefs Chauncey has submitted in other related cases since 1996.

Kennedy cited the OAH brief in his opinion, which had a strong focus on history. He wrote, “changed understandings of marriage are characteristic of a nation where new dimensions of freedom become apparent to new generations, often through perspectives that begin in pleas or protests and then are considered in the political sphere and the judicial process.”

Following the decision, Chauncey noted that he was “pleased to see how much attention it pays to historical scholarship” including that cited in the brief he wrote and the work of former Yale professor Nancy Cott and other historians that was summarized in an amicus brief she prepared for the American Historical Association. “Historians should be gratified to know that our work can have this kind of impact,” Chauncey says.

Yale Law School professors William Eskridge ’78 J.D., Lea Brilmayer, and Harold Hongju Koh were among other faculty members at Yale involved in work around the Obergefell case. Koh co-authored an amicus brief for foreign and comparative law experts; Brilmayer wrote with other scholars who teach in the field of conflict of laws; and Eskridge was co-author of a brief with the Cato Institute and Steven Calabresi ’80, ’83 J.D..

Eskridge joined a conversation about the 5-4 ruling in favor of marriage equality on WNYC radio shortly after it was issued. Described on air by host Brian Lehrer as “perhaps the law professor who knows most” about the subject, Eskridge said he was “very excited” by the outcome.

Esseks, who was also in the courtroom on June 26, told USA Today that the decision “recognized that we make the commitment, we express the love, and we need the protections that are at the core of marriage.” He said the expansion of marriage rights nationally “is something that’s going to create immense joy around the country and isn’t going to harm anyone.”

Among those across the country who were watching the Supreme Court closely were Carole Stanyar ’78, counsel of record in DeBoer v. Snyder, one of the four marriage cases consolidated by the court and heard in April. She told the Detroit Free Press, “We were an army, private citizens, grassroots. Good people, trying to do the right thing … I am tremendously proud of the legal system.” In San Francisco, Stuart Gaffney ’84, one of the plaintiffs in the lawsuit, with David Boies ’66 LL.B. as co-counsel, in 2008 that held that California’s Proposition 8 ban on same-sex marriage violated the state constitution, said, “This is a great day to be alive. It is a great day to be an American.”

Even as many celebrated, Wolfson and Esseks, among others, were quick to point out that just as this decision was the result of decades of hard work, there remains much work to do to secure full civil rights for gay people. Esseks was one of the national leaders featured in a New York Times article on “the next big battle: obtaining federal, state, and local legal protections in employment, housing, commerce, and other arenas, just like those barring discrimination based on race, religion, sex, and national origin.”

“Getting our country to where it needs to be won’t be easy; winning marriage equality certainly wasn’t,” Wolfson wrote in a New York Times op-ed published just after the Supreme Court decision was announced. He noted that his organization, Freedom to Marry, had achieved its objectives and so would wind down, but “the work of our movement, and the broader quest for justice, is far from over.”

Editor’s note: Many alumni across generations and around the country have been involved “on the road” to the decision in Obergefell v. Hodges. This story names just some of those engaged with this national issue to illustrate the scope of the involvement. An exhaustive record would require more chapters. We encourage readers to help write those chapters and to share on social media in order to add their own recollections of Yale alumni classmates and friends, and encourage use of the hashtag #YaleAlumni on all social media posts about graduates of Yale. Yale GALA is working on a record of everyone involved and readers may submit their recollections in care of michael.dobbs@yale.edu.