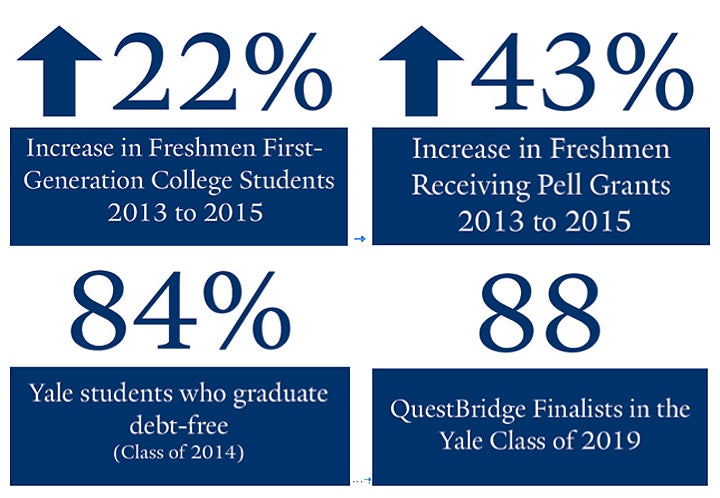 The Yale Office of Undergraduate Admissions reports that just 18 months after making nine public commitments to the White House as part of President Barack Obama and First Lady Michelle Obama’s Call to Action on College Opportunity, Yale has met or exceeded all of its goals.

In 2014 President Peter Salovey worked with leaders across the university to create a series of commitments that would build upon Yale’s longstanding efforts to make the university accessible and affordable to all qualified students. Salovey met at the White House with the President and First Lady, higher education leaders, and other officials in January 2014 to discuss ways to expand college opportunity and officially deliver Yale’s commitments.

“Working together with many people and partners, Yale has pursued these commitments with energy and determination,” said Yale College Dean Jonathan Holloway. “In working to meet our goals, we set out to create new opportunities for lower-income students at Yale and other world-class institutions.”

Dean of Admissions Jeremiah Quinlan reported that the incoming freshman Class of 2019 includes a record number of students receiving Pell Grants, a federal program for low-income students. More than 18.5% of U.S. citizens and permanent residents in the Class of 2019 qualified for a Pell Grant — a 43% increase compared with the Class of 2017. A record-high 14.5% of incoming freshmen will be the first in their families to graduate from a four-year college or university — a 22% increase in the past two years.

“The Admissions Committee and I have been thoroughly impressed with the applications we received from high-achieving students from lower-income backgrounds” Quinlan said. “Yale’s directed outreach efforts, its extraordinary financial aid policies, and key partnerships with local and national organizations have all contributed to diversifying the pool of talented students who apply to and then attend Yale.”

The nine public commitments span a wide range of initiatives and partnerships aimed at prospective students, admitted students, and incoming Yale students. In 2013, the Admissions Office launched a new outreach effort targeted at high school students from low-income families. The Admissions Office committed to expanding the program, which now reaches 20,000 prospective students and includes a new letter written by a Yale undergraduate. Director of Outreach and Recruitment Mark Dunn reported that applications from targeted students have increased 13% over the past two years, far outpacing the overall growth in applications.

Dunn also directs the Yale Ambassadors Program, which sends Yale undergraduates to visit high schools and meet with students during breaks in the academic year. “It is amazing to see our ambassadors’ enthusiasm for connecting with high school students about their experiences at Yale and the experience of applying to college generally,” said Dunn. The program, which receives full financial support from a Yale alumnus, has expanded from 100 ambassadors visiting about 200 high schools five years ago to nearly 350 ambassadors visiting more than 675 high schools in 39 states during the 2014-2015 academic year.

The Admissions Office partners with QuestBridge, a national non-profit organization that assists high-achieving low-income students applying to selective colleges. After Yale made the commitments to the White House, the number of QuestBridge Finalists matriculating at the university increased from an average of 50 in the first several years of the partnership to 80 in the Class of 2018 and 88 in the Class of 2019.

Yale has also increased programming and support for incoming freshmen to ensure that all students begin their first semester ready to thrive in Yale’s rigorous academic environment. After two successful summers, the Freshman Scholars at Yale (FSY) Program, which provides a cohort of incoming low-income and first-generation students an early Yale experience by living and studying on campus for five weeks in the summer, has expanded from 33 students to 48, and there are plans to expand the program further in the future. A separate five-week online mathematics program for incoming freshmen, Online Experiences for Yale Scholars (ONEXYS), will also expand from 20 students in its inaugural class in Summer 2014 to more than 50 in Summer 2015 with new content, software, and mentoring structures.

Underlying all of these efforts is a continued university commitment to provide 100% need-based financial aid to all admitted students. Since 2008 Yale has not included loans in its financial aid awards, and 84% of Yale College students in the Class of 2014 graduated debt-free. The average grant for Yale students receiving financial aid is more than $43,000 per year. Yale’s admissions process does not consider a student’s ability to pay.

For more information about Affordability and Accessibility see:

FAQs about financial aid and student borrowing in Yale College