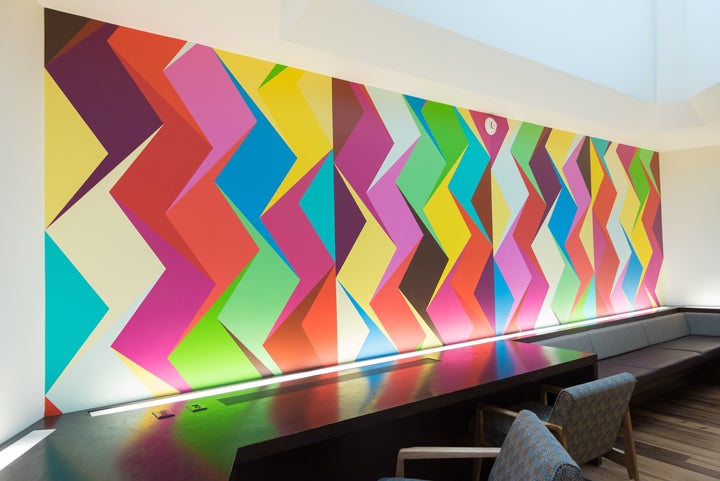 “Rise,” an original wall painting by renowned Nigerian-American artist, critic, and color theorist Odili Donald Odita, was unveiled in the Ezra Stiles College common room this spring. The painting is the first visual artwork by an African artist installed at the university outside the Yale Art Gallery.

Ezra Stiles Master Stephen Pitti commissioned the piece in collaboration with Dean of the Arts Susan Cahan to expand on the renovation of the college in a way that reflected how Yale has evolved.

“We wanted a mural that would enliven and dignify the renovated college,” Pitti says. “My first priority was to find an artist of color who would do that work. Our campus doesn’t have a lot of this type of art — you see 19th-century portraiture in the residential colleges. We wanted a piece of art that would dignify today’s students and faculty, who come from backgrounds that were not represented here when the colleges were first built.”

At the unveiling, Pitti said that students of color — including Native American students, African students, and students of the black diaspora — have become central to what Ezra Stiles and Yale have become. Following Pitti’s remarks, “Rise” artist Odita, who was born in Enugu, Nigeria and raised in the midwestern United States, spoke about his vision for creating an original piece for a study space.

“I didn’t want to create something that would convey an indulgence in melancholy,” Odita said, “Or to engender an idea of something being better.” Instead, the artist said, his aim was to depict inspiration and suggest the act of rising. In talking about how the work might speak to students of color, especially black and African students, Odita spoke about the relativity of color. “This [wall painting] wouldn’t work the way it does without this space,” he explained. “It’s not that [its] colors deny black and white; it’s that they work with black and white.” For Odita, the experience of being a first-generation artist of color “is always inherent in the work. That’s where it’s coming from… my work [is] willing to look at difference,” he said.

Cahan, who recommended Odita to Pitti in 2011, has followed the artist’s career since meeting him at a studio visit in the early 1990s. By the early 2000s, Odita was steadily gaining international acclaim; he completed an installation directed by Rob Storr, dean of the Yale School of Art, at the Venice Biennale, a major contemporary art exhibit in Italy. Cahan and Pitti first talked with Odita about creating an original work for Ezra Stiles in 2012. When Pitti invited the artist to give a master’s tea in 2013, Odita was able to assess different spaces in the college as potential sites for his new piece. He suggested the common room, he said, because“it felt like one of the most important rooms in the building. [Other rooms] were not as quiet or contemplative. … Particularly seeing the ceiling work that was done to open up the outer building to the courtyard, I wanted to continue in that vein.”

Odita submitted a proposal for a piece the same year. After a month of work by his studio assistants in spring 2015, “Rise” finally came to life.

Describing the experience of encountering the wall painting, Cahan said, “You walk in, and it’s bold — the colors are striking. Then, up close, you see not just one shade of yellow, but yellow against brighter yellow. You see lines that are nearly perpendicular to each other, but not quite. Only a truly expert artist can do that. The piece is very generous; it keeps rewarding extended looking.”

For Cahan, the way Odita’s work engages its viewer is part of what makes him such a fitting artist for Ezra Stiles. Furthermore, “Rise” engages the work of other Yale-affiliated visual artists. “[Odita’s] work expands on Sol LeWitt’s tradition; it extends the work of [Josef] Albers,” Cahan says, noting that the Yale Art Gallery owns a vast collection of works by LeWitt, a Conceptual and Minimalist artist,  and the Albers, author of “The Interaction of Color,” who formerly served as the chair of the School of Art’s Department of Design. “You can’t describe an Albers,” Cahan says. “You have to see and experience it in the moment. The same goes for [Odita’s] work.”

Noting that the wall painting is the first commissioned artwork installed in a residential college at Yale, Cahan said she hopes that “Rise” will inspire similar projects in other colleges.

Pitti has already observed students interact with the piece in different ways, he said. “People are thrilled. I’ve heard from a number of students how much they like this room, and undergraduates and faculty members have been posting about Odili’s painting on social media. We are hopeful that students will be anchored in the work, and will see in it a kind of recognition.”

Students and all members of the Yale community are invited to experience “Rise” for themselves. To arrange a viewing, call the Ezra Stiles master’s office at 203-432-0560.