Six teachers honored for inspiring, challenging, and caring for their undergraduate students 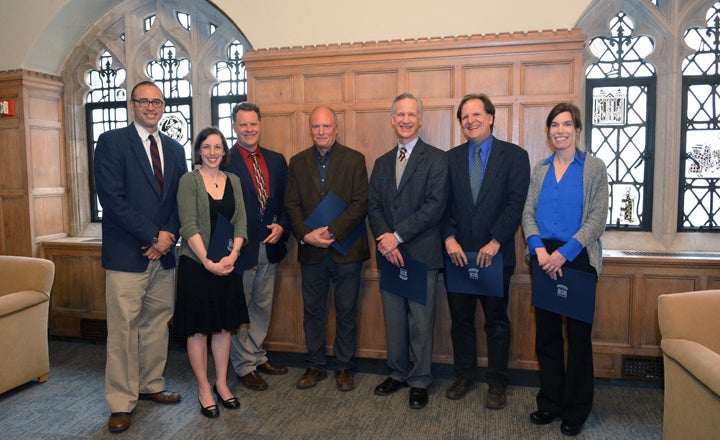 Six members of the Yale faculty were honored with awards for outstanding teaching at a campus ceremony on April 27.

The teachers were nominated by their students for the awards, which were presented by Yale College Dean Jonathan Holloway. The Teaching, Learning, and Advising Committee selected the winners from among the nominees.

At the ceremony — attended by many students as well as the teachers’ colleagues and family members — Holloway said that what most distinguishes Yale College is the commitment of its faculty to teaching. He thanked members of the Teaching, Learning, and Advising Committee for their hard work in selected teachers from among the hundreds of student nominations.

The winning teachers — and Holloway’s citations for each — follow.

Jonathan Reuning-Scherer, senior lecturer in statistics and in forestry and environmental science  — the Richard H. Brodhead ’68 Prize for Teaching Excellence: “Your students adore you — for your enthusiasm, for your dedication, for your accessibility, and for your good humor. Most of your students are not future statistics majors, and most confessed that they took your course reluctantly in order to fulfill a requirement, but they marveled at your ability to make dry material interesting by using examples that engaged ‘even the least mathematically inclined of students.’ One student commented: “He somehow taught ‘Introductory Statistics’ in such a way that made the 300-person lecture seem like a one-on-one study session. He brought the material alive with a mix of lighthearted banter, fascinating examples, and a true passion for statistics.’”

Catherine Nicholson, assistant professor of English — the Sarai Ribicoff ’75 Award for Teaching Excellence in Yale College: “Your students repeatedly describe you as ‘passionate,’ ‘enthusiastic,’ and ‘energetic.’ One of them noted that you are a ‘deft discussion leader who manages to prompt interesting and productive conversation without being overbearing.’ Another student said: ‘It is rare to feel both unconditionally supported and pushed to the limits of my abilities as a writer and a scholar.’ Another described taking your courses this way: ‘I left every class feeling as though I had climbed a mountain.’ Your love for Renaissance literature and ability to transmit that love to your students is summarized by this student’s comment: ‘She says that she could read Spenser forever, and I not only believe it, but am at least momentarily convinced that I could, too.’”

Turner Brooks, professor (adjunct) of architecture — the Sidonie Miskimin Clauss ’75 Prize for Teaching Excellence in the Humanities: “Your students praise the way you create a community of learners in your classes by supporting and challenging them, and most of all for treating them with dignity. One student noted: ‘In a field where big egos often battled for theoretical high ground, Professor Brooks never talked down to a student, even when a student’s project did not appeal to his own tastes.’ Another student noted how you ‘patiently listen to and analyze student thoughts and design ideas, almost like an architectural psychologist.’ Yet another student said: ‘He engendered us with an appreciation for the strangeness, or even wonder, that lies behind even the simplest things in life. And, in return, we always got the sense that he felt we had things to teach him, too.’”

Mary Louise Timmermans, assistant professor of geology and geophysics — the Dylan Hixon ’88 Prize for Teaching Excellence in the Natural Sciences and Mathematics: “Your students praise the way you combine ‘a passion for science and research’ with a ‘caring spirit’ and a ‘commitment to students.’ One student noted: ‘Professor Timmermans brought an enthusiasm to the classroom each day that proved an inspiration for each and every student. Her constant, contagious smile not only demonstrated her interest in the material, but it was proof that she enjoyed every moment she spent in the classroom with us.’ Many students also describe you as an inspiration and a role model for what it means to be a scientist and a teacher, leading several of your students to consider an academic career.”

Steven Berry, the David Swenson Professor of Economics — the Lex Hixon ’63 Prize for Teaching Excellence in the Social Sciences: “For over 25 years you have taught economics to Yale undergraduates, including literally thousands of students in your course ‘Introductory Microeconomics.’ Students who have taken this course with you have been amazed at your ability to teach such a large class so effectively. One student said: ‘When I showed up on the first day of ECON 115, I was prepared for a painful experience with killer curves, endless lectures, and dull material. I was, however, wonderfully surprised. Instead of complex graphs and mind-numbing problem sets, he gave lively lectures about pollution, global warming, insurance markets, elections, finance markets, health care, and how economists look to solve those problems.’ Another student summarized your teaching this way: ‘Professor Berry brought the world into our economics class.’”

Edwin Duval, the Henri Peyre Professor of French — the Harwood F. Byrnes/Richard B. Sewall Teaching Prize: “For over 25 years, you have taught Yale College students to understand and appreciate the literature of the French Renaissance, which is your specialty, and you have also taught multiple generations of students in Directed Studies to read and write about literature across a wide range of cultures and centuries. Whatever the course, text, or time period, your students are grateful for your extensive office hours and lengthy feedback on written work, as well as your skill as a teacher in the classroom. They note, in particular, your ability to create ‘an environment in which all students freely join in the discussion’ while also ‘making sure that students did not miss critical points in the text.’ One student said: ‘He is equal parts teacher and maestro.’”

More detailed profiles of the winning teachers will appear in the future in YaleNews.