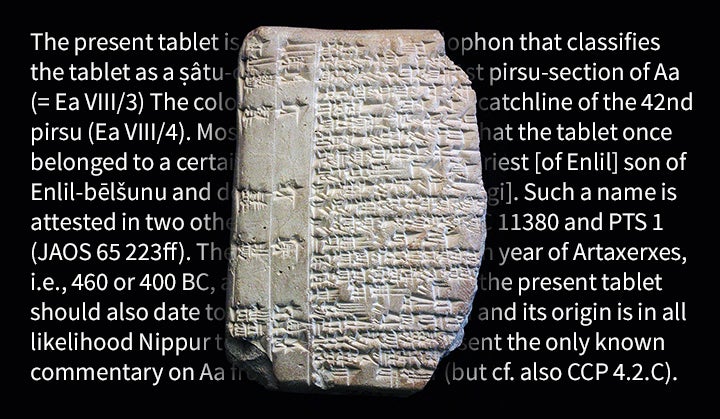 Analyzing ancient texts on cuneiform, or clay tablets, may seem like an esoteric endeavor.

Not so, say the scholars working on the Yale Cuneiform Commentaries Project (CCP). They argue that these are just some of the first traces of a tradition that is prevalent throughout history and in our modern world today.

Scholars on this new Yale project are making these seemingly obscure commentaries from the first millennium B.C.E. in ancient Mesopotamia accessible for the first time to a broader audience of specialists and to the interested public by way of a new, interactive website.

This site houses the world’s oldest cohesive group of hermeneutic texts — about 850 commentaries from Assyria and Babylonia. It provides background information on the genre and a searchable catalog, as well as photos, drawings, and translations of individual commentary tablets. There is also an index of where each commentary originated. Some of the ancient commentaries are fragments, but others have several hundred lines, including one that has about 500 entries. Eventually, the website will provide fully annotated electronic editions of all known commentary tablets.

Eckart Frahm, director of the project and a professor of Assyriology in the Department of Near Eastern Languages and Literatures, is one of roughly 250 people worldwide working in the field of cuneiform commentaries, and one of only about two dozen who can read Babylonian and Assyrian commentaries.

Frahm noted that analyzing these texts makes us think in more sophisticated ways about textual interpretation in general. “We have to keep in mind that we are doing this all the time in our modern world,” Frahm says. “Students are doing it here at Yale when they are asked to provide an interpretation of a play by Shakespeare, judges do it when they read the law, and religious people do it with scripture.”

“People from throughout early history have always talked about texts and interpreted them,” Frahm says. “But the earliest corpus of written text commentaries comes from first millennium B.C.E. Assyria and Babylonia.”

According to Frahm, the commentaries that are included on the CCP site were used by kings and had a pragmatic dimension to them as well. “They influenced royal decision making, just as legal and religious interpretations have a significant impact on modern life.”

The project originated from a book that Frahm published in 2011 titled “Babylonian and Assyrian Text Commentaries: Origins of Interpretation.” “I realized it would be very helpful to make this material available online,” says Frahm. “The website is an expanded and updated version of the book.”

Frahm originally became interested in this topic because it was understudied. “I realized that there was only one monograph on this topic from 1933 in French, which was based on 24 commentary tablets. It was clear to me that this needed to be researched more carefully, and so I started with the book.”

Enrique Jiménez, a postdoctoral associate in the Department of Near Eastern Languages and Literatures, is the senior editor of the project. He was responsible for the digital component of the CCP, creating the database and developing the website. In addition, Jiménez photographed about 200 cuneiform tablets from several museums around the world — many of them from the British Museum — and prepared annotated editions of several dozen commentaries.

For Jiménez, the most rewarding aspect of the project is that the tools they are developing will be useful to scholars for a long time. “These tools are based on material that was previously only partially accessible to scholars. About 50% of the known commentaries are totally unpublished, and many of the published ones are available only in the form of hand copies or raw transliterations — no translation or explanatory annotation.”

Frahm explains that these texts played a crucial role in both the political and intellectual life in ancient Mesopotamia. “Assyrians and Babylonians had long omen series lining out, for instance, that a lunar eclipse meant that something very bad was about to happen to you, or, if you found marks on the liver of a sacrificial lamb, you should not go to war. Commentaries facilitated the process of negotiating between specific observations such as the lunar eclipse, relevant entries in the omen series, and the political exigencies of the day, thus helping the king with his decision making, and providing positive feedback. But commentaries were not only written to explain omen treatises, but also on literary texts, ancient dictionaries, and medical compendia. They were copied and studied by priests, scholars, and in one case even by a leather worker.”

Frahm says one surprising finding from the research is that many cuneiform commentaries were either borrowed or otherwise transferred from one city to another. “There was a transfer of knowledge going on, and now that we have more of these texts it shows us these intellectual networks in operation. We are now able to write small biographies of these tablets. The reconstruction is complicated, but we can trace their history by subscripts that list the writer, city, and the date of the copy.”

This project is made possible with software developed by the Open Richly Annotated Cuneiform Corpus (ORACC), which is located in Philadelphia, Pennsylvania. ORACC is a collaborative effort to develop a complete, annotated corpus of cuneiform that will support future research on ancient Near Eastern texts.

In addition, the Cuneiform Commentaries Project cooperates with the museums where the tablets are housed, including the British Museum in London, and here at Yale with the Yale Babylonian Collection and the Sterling Memorial Library.

“Once the project is completed, a flood of new material in the form of fully annotated editions will be available to anyone,” says Jiménez. “Even at this early stage of the project we can already see an increase in interest in these texts, both in the field of Assyriology, and in the general public.”

In the past, scholars focused on primary texts to paint a picture of ancient life in Mesopotamia. This project, says Frahm, “gives us a chance to establish what people in these ancient worlds thought themselves about their religious and intellectual traditions. It opens up a new window into the intellectual history of the ancient world.”