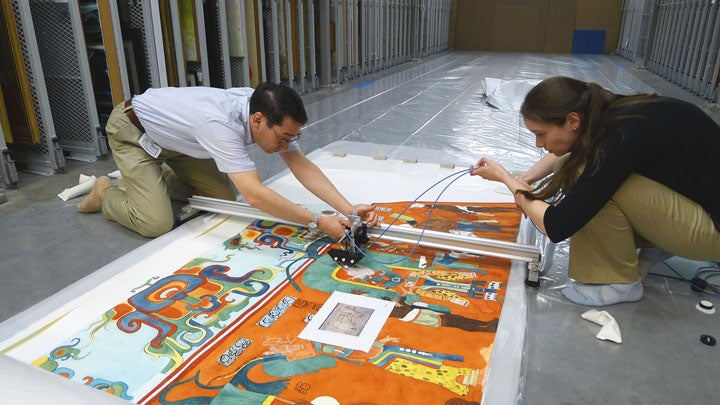 Yale University has received a $2 million grant from the Andrew W. Mellon Foundation to advance the field of conservation science. The grant supports Yale’s Institute for the Preservation of Cultural Heritage (IPCH) and funds its Aging Diagnostics Laboratory, where researchers study and develop new tools and techniques to monitor and slow the degradation of cultural objects and entire collections.

Yale has committed to raising an additional $3 million within five years to create an endowed fund for conservation science at the IPCH.

“With this gift, the Mellon Foundation has once again demonstrated its strong commitment to excellence in the arts and sciences,” said Scott Strobel, vice president for West Campus planning and program development. “Because IPCH is embedded in the interdisciplinary setting of Yale’s West Campus as one of seven research institutes, it is very well positioned to develop conservation on a local and global scale.”

The IPCH is dedicated to advancing the field of heritage science by improving the science and practice of conservation in a sustainable manner. At the crossroads between science and art, the institute is home to state-of-the-art research, conservation, and digitization laboratories.

“Our cultural and natural heritage is increasingly threatened with destruction, not only by physical and chemical causes of decay, but also by changing social and economic conditions. The world is changing at a rapid pace, and research as well as academic training must keep up with these challenges,” said Stefan Simon, inaugural director of the IPCH.

The institute’s Aging Diagnostics Laboratory, led by Paul Whitmore, focuses on finding ways to detect and even anticipate the first signs of degradation and disintegration. “What we aim to do is understand the future life of objects — that is, we project the changes that may occur to alter an object’s appearance or structure, identify factors that might speed those changes, and develop strategies to slow them,” Whitmore said.

This work is grounded in basic science, particularly the fundamental processes of material change. Whitmore, who was trained as a chemist, is well known for substantial innovations and discoveries that can improve conservation practices. He invented the microfading tester, a device that predicts color changes induced by light striking a pigmented surface over time. The tool provides empirical data to inform lighting policies for safe exhibition of artworks in collections and museums. His team is also exploring new exhibition lighting systems based on LEDs. Another project involves gas sensors that can detect the earliest stages of an object’s deterioration, allowing conservators to target artifacts for special care before their problems have become critical.

“Paul Whitmore is internationally recognized for his work, and in Yale’s vibrant academic environment — with access to students, faculty, and the depth and breadth of Yale’s collections — we now have a unique opportunity to make important contributions in research, academic training, and practice” said Simon. “This work has the potential to have global impact, and we are certain that Yale’s collaborative culture will speed it greatly.”

The Andrew W. Mellon Foundation has already played a pivotal role in developing the IPCH by supporting its Technical Studies Laboratory, which conducts technological research with special focus on manufacture, authenticity, and life history of cultural heritage. Its contributions build on a half-century of giving to Yale first spearheaded by the late Paul Mellon ’29.

The Aging Diagnostics Laboratory moved to Yale in 2013 from Carnegie Mellon University, where it was known as the Art Conservation Research Center. “Paul Mellon’s vision realized this laboratory and has sustained it for 65 years,” said Mariët Westermann, vice president of the Mellon Foundation. “We are proud of its accomplishments and pleased that its continuing work will help to shape preservation practices around the world.”