Protecting the environment begins in the heart, says Buddhist leader 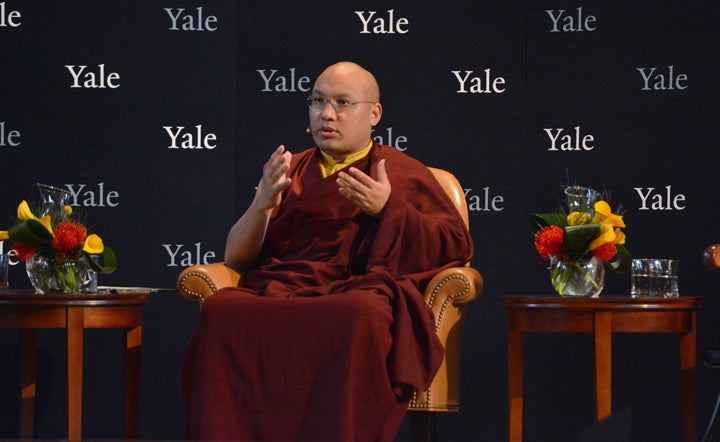 As a child living in a rural area in eastern Tibet, His Holiness the 17th Karmapa Ogyen Trinley Dorje recalls a natural environment that was pristine and untarnished by modern development.

It was there, he said during his Chubb Fellowship Lecture at Yale on April 7, that he first experienced a feeling of “intimate connection” with and respect for the natural world.

“Where I was born, we regarded and experienced our environment as a living system, a living being: The mountains, the sources of water were all regarded as the dwelling places of what I would call holy spirits of various kinds,” the Karmapa told the packed audience in Woolsey Hall. “We therefore respected every aspect of the environment as part of a living system. We didn’t wash our clothes or even our hands in flowing water sources. We didn’t cast any kind of garbage or any kind of other pollutant into our fire in our hearth. We regarded the entire environment as innately sacred.”

Today, the Buddhist leader hopes to inspire others to see the interconnectedness of humans and their environment, and discussed that theme in his Chubb Lecture on “Compassion in Action: Buddhism and the Environment.”

Addressing the audience through an interpreter, the Karmapa decried the human-contrived distinction between their own being and the external world and described environmental stewardship as a moral responsibility.

In Tibet, he told his audience, people compare the interconnectedness of humans and their environment to a container and its contents — where one cannot be separated from the other. To think of our interconnectedness with the environment in those terms, he said, makes it easier to understand our responsibility for protecting it.

Having scientific knowledge of the symbiotic relationship between humans and their environment is not enough, however, to make people feel protective of all that surrounds them, the 29-year-old Karmapa acknowledged.

Unless a concern for and connection to the environment becomes part of our daily lives, we will be unable to protect it from increasing harm and degradation, he told his audience.

“Our knowledge, our understanding, has to become so intimate, so personal to us that it naturally changes our behavior, so that we feel it emotionally and in our hearts,” he said.

The Karmapa blamed human greed for the degradation of the environment and said that spiritual and religious leaders can have a role to play in inspiring better care for the environment.

“When I say religious traditions, I don’t just mean Buddhist traditions; I mean every religious tradition in the world can play its part. And I’m confident that if we do this — if we can work together, if we can apply the knowledge that is embodied in the many indigenous cultures that have survived, the ancient wisdom of our ancestors — we will be able to discover together that environmental protection is not just a point of view, not just science, but must be a way of life.

“At various times in our history, science and religion have seemed to be contradictory to each other, have even become enemies — attacked one another or, to be more polite, refuted one another,” he continued. “But really there is a great commonality of experience that we all share. We are all human beings living in this same world, relying on this same environment. And, therefore, on that basis, on the basis of acknowledging our shared or common experience, we have to accept that the protection of this environment is beyond the views of any one religion.”

He added that there would be “no contradiction” between science and spirituality if the task of environmental stewardship is approached “by being loving and compassionate” and by making practical use of scientific knowledge and “not living as though are in denial about it.”

In his native Tibet, where the Himalayas feed the largest Asian rivers, representatives of Buddhist monasteries have been trained in best practices for water conservation and relay the importance of the water supply to local and neighboring communities, the Karmapa told his audience.

“When this subject was first introduced to representatives of these monasteries, they were immediately emotionally affected and demonstrated tremendous commitment to environmental stewardship in their region,” the Karmapa said. “But at the same time, we lack scientific knowledge and technical expertise. So in order to this, we need the support of the scientific community and the assistance of the scientific community. I mention this as an example of how, in order to preserve our environment, we all need to work together and offer our individual skills and knowledge.”

Following his address, the Karmapa answered questions posed by Mary Evelyn Tucker, a senior lecturer and senior research scholar at the School of Forestry & Environmental Studies and the Divinity School, and Andrew Quintman, assistant professor of religious studies, who also introduced the Buddhist spiritual leader.

Quintman asked the Karmapa how to bridge good intention and action with regards to environmental stewardship. The Buddhist leader answered by describing his own decision to become a vegetarian after many years of eating meat.

“I knew it was wrong but I still ate [meat],” the Karmapa said. “In that type of case, I think that the bridge is a type of compassion, a type of courage, by the power of your heart. By the power of your heart I mean that which enables us to decide once and for all to take responsibility for our own actions, to be able to commit ourselves to accepting and fulfilling our responsibilities as a person. The bridge is a mere understanding that becomes more emotionally felt. And a deep understanding based on emotional feeling will inspire us to take action once we listen to the advice of our hearts.”

Questions from audience members, submitted in advance, centered on the issue of climate change and how best to take effective action to protect the environment. Asked how to convince politicians and others who deny climate change of its reality, Karmapa laughed and said, “I don’t have all the answers.” He then responded: “There are really two levels of denial here. There’s the denial of those who are actually climate change deniers — politicians and others — and then there’s the denial that most of us live with, where because we don’t actually feel [climate change], it’s not on our minds most of the time. And there are little pockets of odd reactions. For example, Tibet is a cold country. It’s often hard to get warm enough. So some Tibetans have greeted global warming with enthusiasm, saying it doesn’t get as cold as it used to, and it’s much more pleasant. As to what to do about politicians and others who are climate change deniers, the best thing might be to appeal to support from spiritual and religious leaders because they have so much influence over their respective communities or devotees.”

Asked how students can organize to take fruitful action, the Karmapa said they can respond by taking part in traditional activism, such as by holding demonstrations, but more importantly, they should think about taking action on an individual level.

“Fundamentally, each of us has to start with ourselves, because the only solid basis for the type of courage it’s going to take to make these changes comes when you have made changes in your own life and have begun to feel the effects of that. That courage can’t be taken away from you, so you won’t lose in the process of a long career of activism. Otherwise, if we attempt to change or convince others to change without having changed the way we live our lives ourselves, we will be fueling ourselves not with an internal courage but with expectations, and when others don’t change, we become disillusioned and possibly burned out altogether. So whatever we may do on a social or communal level, we have to begin by making changes in our own lives.”

The full address can be watched here.