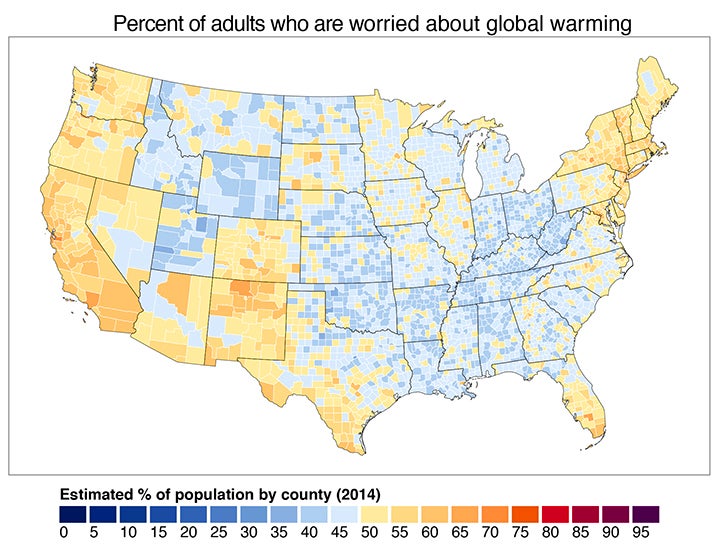 A team of Yale researchers has developed a new statistical model that accurately estimates public climate change opinion and public policy support in all 50 states, 435 United State Congressional districts, more than 3,000 counties, and cities across the nation. The model allows users to explore public opinion in unprecedented geographic detail.

The model, which is described in the journal Nature Climate Change, was developed in partnership with Utah State University.

“Most of the action to reduce carbon pollution and prepare for climate change impacts is happening at the state and local levels of American society,” said Anthony Leiserowitz, a research scientist and faculty member at the Yale School of Forestry & Environmental Studies (F&ES). “Yet elected officials, the media, educators, and advocates currently know little about the levels of public and political will for climate action at these sub-national levels. State and local surveys are costly and time-intensive, and as a result most public opinion polling is only done at the national level.

“This model for the first time reveals the full geographic diversity of public opinion in the United States at these critical levels of decision making,” Leiserowitz said.

“Although a majority of people in every state think global warming is happening, this analysis makes it possible to see how much opinions differ within each state,” said Peter Howe of Utah State University, the lead author of the paper. “These differences are partly due to the fact that different groups often think differently about the issue. For example, Hispanics and Latinos tend to be more worried about global warming than other racial or ethnic groups, which can be seen on the map in counties with more Latino residents.”

The estimates are derived from a geographic and statistical model using a large national survey dataset (n>13,000), along with demographic and geographic population characteristics. To validate the model, the research team conducted separate surveys in four states and two cities, and found the estimates were within three percentage points of the independent surveys at the state level and four percentage points at the city level. Overall, the accuracy of the model estimates is higher for geographic areas with larger populations.

In addition to Leiserowitz and Howe, principal investigators include Jennifer Marlon and Matto Mildenberger of Yale.