As a freshman, Reed Bobroff ’16 went through a period of adjustment at Yale when he felt pretty homesick for his family and friends back home in Albuquerque, New Mexico.

He thought he might find solace if he could sing and drum in the powwow style that he had learned as a member of a club at his high school, the Native American Community Academy. But he had left his handcrafted drum at home, so he limited himself to singing powwow songs while alone in the Ezra Stiles College music room.

Not long afterward, Bobroff, who is Navajo, told his new friend Sebastian Medina-Tayac ’16 about his solitary singing. Medina-Tayac suggested that he join Bobroff for a bit of drumming.

A member of the Piscataway Nation, Medina-Tayac had never before participated in powwow singing or drumming, but had grown up playing drums at his tribe’s traditional ceremonial and spiritual gatherings. He, too, had left his drum at home in Maryland, so he and Bobroff instead tapped wooden drumsticks on a leather-topped piano bench in the music room.

The laughter and comfort Bobroff and Medina-Tayac shared as they taught each other different styles of drumming singing led to a feeling of deep camaraderie between the two Yale students. They soon learned that another student, Dinée Dorame ’15 (whose heritage is Navajo, Mexican and Yacqui Indian), wanted to perform the “fancy shawl” powwow dancing she had learned as a child back home in New Mexico. Eager to share their song and dance, the three co-founded Blue Feather, the first-ever formal powwow group at Yale.

Since its founding two-and-half years ago, Blue Feather has grown to include 18 members, who perform at a variety of events on and off campus. Its most recent public appearances were during Ezra Stiles Arts Week, at a celebration of the newly remodeled Sterling Memorial Library nave, and at a Midwinter Social hosted by the Association of Native Americans at Yale (ANAAY) that also brought powwow groups from around the region to campus.

While the history of powwow is unclear, say the Blue Feather members, it is believed that powwows began during the early 1800s, when American Indian singing and dancing were incorporated in traveling medicine shows. Modern powwows are intertribal social gatherings and cultural celebrations that feature dancing, singing, and drumming, among other activities. Many powwows offer competitions in a variety of song and dance categories for both men and women.

For some Native Yale students, Blue Feather has helped foster a sense of community and identity away from home.

“Blue Feather has really given Native students a space to be visible on this campus and to engage in powwow culture and be a part of this community in a very specific way,” says Bobroff. “It’s exciting to be a Native student and to have a place where you can come, engage in powwow culture, learn songs and powwow etiquette, and travel to powwows off campus. It’s given us a space to express our identity through performance.”

Much of the music performed by Blue Feather can be described as Native American pop music, says Bobroff.

“Round dance songs, which are the ones we play on our hand drums, are very centered on the themes of falling in love, loss, and yearning and pining away for that someone who is on the reservation across the river,” says Bobroff, who serves as president of Blue Feather. “Hand drum songs and round dance are a way to express that we are still here, and we’re still thriving in the contemporary world with this kind of music that’s been going on for centuries.” One of the group’s popular performance songs, for example, is called “Facebook Drama,” which expresses a lover’s dismay over a breakup that took place over social media.

The group has both men’s and women’s sections, with each having a song leader. Medina-Tayac, the men’s song leader, says one of the joys of being in the group for him has been learning powwow music with his peers and becoming increasingly proficient in its performance.

“Most of our members come in without a whole lot of experience,” he says. “To teach and learn at the same time is one of the best ways to build community. We’re all teaching, and we’re all learning at the same time.”

Honoring the past and present

Medina-Tayac, whose parents have been active in the American Indian Movement (AIM), introduced Blue Feather members to a number of protest songs and “honor songs” that he learned growing up, including the AIM Song, a pan-tribal unity song that became popular in the early 1970s. Honor songs pay homage and respect to particular individuals or groups, and Medina-Tayac and Bobroff have written some of their own to celebrate particular Blue Feather members or incoming or graduating Native students, among others.

New to the group this year is freshman Katherine McCleary, a member of the Chippewa-Cree Tribe from Montana, who has also been showcased as a dancer in Blue Feather.

“I joined Blue Feather because it was one way to continue being involved in my Native culture as I transitioned into college,” says McCleary. “I enjoy being a part of such an amazing and genuinely kind group of people. Through song and drum a bond is formed between us that allows us to rely on each other outside of practice.”

McCleary adds that dance and song are important to her tribe and Native community, and she is grateful to be able to continue that tradition at Yale.

“Blue Feather has defined and cemented my Native identity on campus by simultaneously giving me the opportunity to practice my own culture and also share my culture with others,” the freshman says.

Dorame, previously Blue Feather’s sole dancer, is happy to share the spotlight with the new member. McCleary’s “northern traditional” style of dancing, which involves holding the body tall and straight, is very different from Dorame’s “fancy shawl” dancing, which is meant to resemble the fluttering movement of a butterfly.

“I’ve been fancy shawl dancing since I was 5 years old,” says Dorame, who is also the women’s song leader for Blue Feather. “I always wanted to powwow dance in college. For me, being in Blue Feather is a valuable part of my identity but it’s also an extracurricular, like a sport. … It’s my most time-consuming extracurricular, and the one I put the most heart into.”

The element of laughter

Blue Feather members practice three times a week for more than an hour each session, and also rehearse before shows.

During practices and rehearsals, group members “joke around a lot and really love each other,” says Karléh Wilson ’16, who is of Black Creek heritage.

“It’s always a great, supportive atmosphere at rehearsal,” she says. “Even when we are not rehearsing and are just hanging out, we always end up singing, and it’s so fun to have that at Yale.”

“There is a lot of jolly-ness associated with powwow, so we do take our laughter and fun very seriously,” acknowledges Bobroff.

Wilson had no previous powwow experience before she joined the group, and says that it was the fun and singing that most drew her to Blue Feather, rather than a deep connection to her Native heritage.

“I grew up singing with my family, especially since my father is a professional musician and music theory professor,” she says. “So learning powwow music is fun because it has been a way to break down all the Western civilized structures of music that have been ingrained in me. Music theorists would be surprised to know that powwow music is extremely complex and hard to master. I had not heard it before my friends introduced me to it, but it has really challenged my way of thinking about music and allowed me to learn more about myself in that way.” 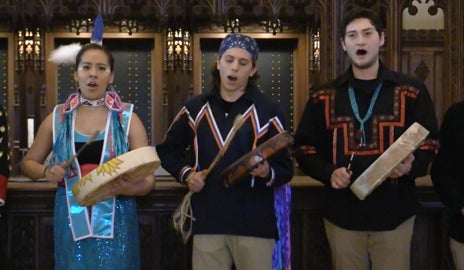 While most members of the group have some Native heritage, Blue Feather also welcomes non-Native students. Among the four non-Native members of the group is Anastasia Cummins ’15, who first came to enjoy contemporary powwow music — specifically the group Northern Cree — while participating with Dorame in the Yale in London program. She became “hooked on the sounds,” she says.

Cummins especially appreciates learning about the music she and her fellow Blue Feather members perform.

“Powwow music can’t just be lifted off the radio or out of a songbook — we scour powwow singers’ Facebook pages and YouTube accounts to find new songs,” she continues. “Because we’re singing songs that are important to a culture, we are actively engaging with that culture, which is constantly changing and engaging back with us. Indigenous music movements are really important to their communities, and it’s amazing that we get to support and learn from those movements. For me, joining Blue Feather was one of the first moments of inspiration that have led to a deep interest in Native American culture. In fact, next year I will be going to South Dakota to teach on a reservation as a Teach for American corps member, partially thanks to Blue Feather.”

Medina-Tayac says that the group’s repertoire has expanded significantly from the Blue Feather’s first year on campus, when it performed about five songs. The group now has some 15 songs in its performance repertoire.

“When we started, we mostly performed at events at the Native American Cultural Center or hosted by the Association of Native Americans at Yale, but now we have become more like any other Yale performance group and are appearing at different venues,” he says. “That’s been pretty amazing for a powwow group.”

For Bobroff, Medina-Tayac, and other members of Blue Feather, earning a reputation on campus for offering artful — as well as fun — performances, is a testament to the vibrancy of Native culture.

“Native Americans are often mythicized and fetishized,” says Medina-Tayac. “We in Blue Feather work hard to not mythicize ourselves. We’re college kids, and we are an active, lively group. As powwow performers, what we are essentially saying is,  ‘This is our pop culture.’ We are making the assertion that Native people have a contemporary, living culture. It’s a reminder that we are still here, and our culture has evolved and changed, and this is what it looks like now, despite a long history of oppression.”

He and Bobroff acknowledge that the sound of powwow music may take some getting used to for the uninitiated, but they believe their audiences quickly appreciate the drumming and singing.

“Powwow music is really infectious,” comments Medina-Tayac. “Once you get it, get the idea of it, you can’t come away from it. It becomes as broad, diverse, and beautiful as jazz or rock.”

With Blue Feather’s recent rise in membership and popularity on the Yale campus, Bobroff feels confident that the group will be able to sustain itself in coming years, long after its co-founders graduate.

“I think it’s just really exciting to be at a moment where Natives are visible on Yale’s campus,” he says.  “I think that’s why we’ve become so big in recent years, because people feel that they can be seen and they can be heard, very literally.”