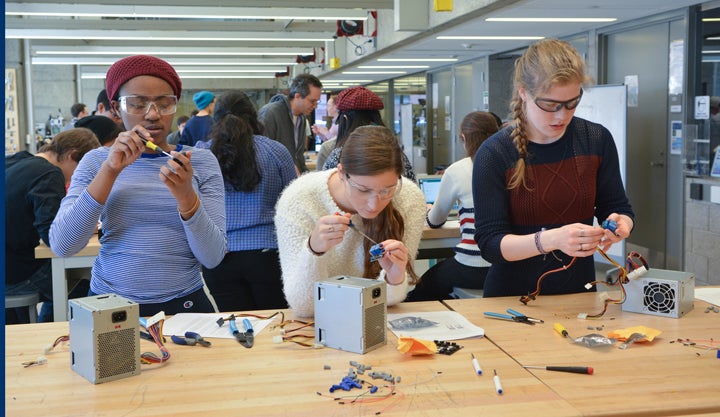 The Leona M. and Harry B. Helmsley Charitable Trust has awarded Yale a grant to establish four postdoctoral fellowships at the university.

Funded through the Yale Center for Teaching and Learning (CTL), the fellowship program is one of a number of Yale initiatives designed to address the national crisis in undergraduate science, technology, engineering, and mathematics (STEM) education and the predicted shortage of 1 million graduates needed to fill public- and private-sector jobs in the STEM fields. Yale contributes to the national effort to mitigate this shortfall by increased attention to recruiting and retention in its STEM majors.

The four Helmsley postdoctoral scholars, appointed to Yale’s mathematics and physics departments, will receive training in evidence-based teaching methods and integrate these strategies into introductory math and science courses at Yale and two other Connecticut institutions. In collaboration with the professional staff at the CTL, the scholars will also share these methods with other educators, including faculty members at Yale, professors in the partner institutions, and participants in regional conferences focused on STEM teaching.

The grant will also provide funding in 2016 and 2017 for six regional National Academies Summer Institutes, a training program on evidence-based teaching for STEM instructors. Building upon a successful institute series funded by the Howard Hughes Medical Institute (HHMI) and coordinated by Yale’s CTL, these new institutes are charged with increasing participation by community college teachers, graduate students, and postdoctoral scholars who will become the next generation of STEM educators.

“The Yale Center for Teaching and Learning is extremely grateful to the Helmsley Charitable Trust for this critical funding,” said Scott Strobel, deputy provost for teaching and learning. “Over the past decade, Yale has worked to transform STEM teaching on our campus and to disseminate better teaching practices to a wide audience of educators. This generous new grant will accelerate efforts at Yale, while contributing to better teaching practices nationwide.” Strobel is the Henry Ford II Professor of Molecular Biophysics and Biochemistry at Yale and an HHMI investigator.

A call to improve STEM education

Colleges and universities across the country recognize a need to improve the delivery of STEM education. The President’s Council of Advisors on Science and Technology, established by Barack Obama, released a report in 2012 that included several key recommendations — among them, the goal of training faculty members in teaching methods that have demonstrated empirical effectiveness, and the need for a nationwide experiment to address the math preparation gap.

STEM programs are known for their high attrition rates, especially among women and underrepresented minorities. Nationwide, less than 40% of students who enter college intending to major in a STEM field complete a STEM degree. Reformers of STEM education seek to reverse this trend with improved introductory math and science courses that incorporate active learning and student engagement. These strategies have been shown to increase the number and diversity of STEM graduates. Even in large introductory courses, evidence-based teaching methods give students a more active role in the classroom and provide them with early opportunities for creativity and original thinking.

The addition of the Helmsley scholars will infuse Yale’s growing STEM initiatives with additional energy and perspectives, noted Strobel. With the support of the Helmsley award, the Yale CTL aims to continue improving introductory STEM courses at Yale and to disseminate evidence-based methods to other colleges and universities. The new program also provides the Helmsley scholars with a rich variety of teaching experiences, preparing them for future roles in education, administration, or policy.

The scholars will teach introductory courses in math and physics, beginning with mentored teaching experiences at Yale and then expanding to classrooms at the University of Bridgeport and Housatonic Community College. The scholars’ immersion in a variety of institutions will expose them to diverse student populations, a benefit as they advance their own teaching careers. Jennifer Frederick, executive director of the CTL, notes that these interactions offer a way to share best practices among educators and to secure valuable feedback for the National Academies Summer Institutes. “The Helmsley scholars and faculty serving as liaisons between the institutions will provide critical input to the summer institute curriculum to ensure its relevance to the expanded population of participants,” she said.

Partnering with other schools is also a way to achieve the widest possible impact, reforming STEM education regionally and ensuring greater persistence in STEM majors by a more diverse pool of future scientists, Frederick noted. “Embedding the Helmsley scholars in academic departments outside of Yale facilitates connections among educators in the region and extends lessons learned to institutions that may not have the resources to embark on such a project independently,” she said. “Their work in the partner institutions will help accelerate necessary reforms in STEM pedagogy not only at Yale, but at other colleges and universities nationwide.”

The Yale Center for Teaching and Learning

Since 2010, Yale’s Center for Scientific Teaching — founded by Jo Handelsman, the Frederick Phineas Rose Professor of Molecular, Cellular, and Developmental Biology, and HHMI investigator, and directed by Frederick,— has coordinated the National Academies Summer Institutes and trained over 1,200 STEM instructors in evidence-based teaching. This work will continue at Yale under the auspices of the CTL.

About the Helmsley Charitable Trust

The Leona M. and Harry B. Helmsley Charitable Trust aspires to improve lives by supporting effective non-profits in health, place-based initiatives, and education and human services. Since 2008, when the trust began its active grant-making, it has committed more than $1 billion to a wide range of charitable organizations. The trust’s Education Program seeks to advance American economic competitiveness as well as individual social mobility. In grades K-12, the trust focuses on ensuring all students graduate high school prepared for college or careers by supporting teacher effectiveness and the adoption and implementation of high academic standards. In higher education, the goal of the trust’s grant-making is to increase the number and diversity of college graduates in STEM fields by improving persistence to graduation. For more information, visit http://www.helmsleytrust.org.