A new way to control information by mixing light and sound 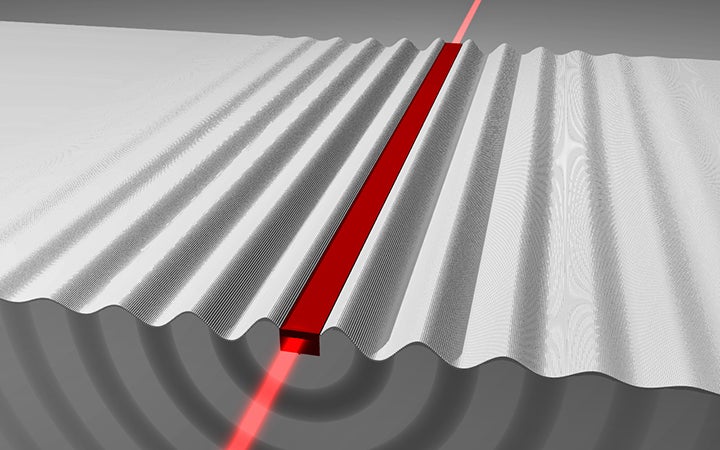 For once, slower is better in a new piece of technology.

A Yale lab has developed a new, radio frequency processing device that allows information to be controlled more effectively, opening the door to a new generation of signal processing on microchips. One of the keys to the technology involves slowing information down.

The new system, described in the March 5 edition of the journal Nature Communications, combines photons and phonons — electromagnetic energy and sound energy — to conduct sophisticated signal processing tasks by harnessing the properties of lower-velocity acoustic waves. In this case, the sound waves are a million times higher in frequency than anything a human can hear.

For decades, researchers have explored ways to shrink down signal processing technologies by encoding information on light. Using circuits that control photons rather than electrons, individual components can be made far smaller and support immense information bandwidths. Yet one thing was missing: an effective way to incorporate acoustic waves, which hold onto information longer, in an even smaller space.

By creating new circuits that can control light and sound, researchers at Yale have developed hybrid technologies that combine the best of both worlds.

“This is definitely something that’s going to be built-upon in the years to come,” said co-author Peter Rakich, a Yale assistant professor of applied physics and principal investigator of the research. “It’s a very different approach because of its flexibility. We’ve made something that is smaller as well as lighter, and can go on the same microchip with a processor.”

“Our work here is a combination of physics and engineering,” said Heedeuk Shin, an associate research scientist in applied physics at Yale, and the study’s first author. “We demonstrate a powerful new signal processing operation that isn’t possible with photons alone.”

Additional authors of the research are Jonathan Cox, Robert Jarecki, and Andrew Starbuck of Sandia National Laboratories, and Zheng Wang of the University of Texas-Austin.