Yale … and all that jazz 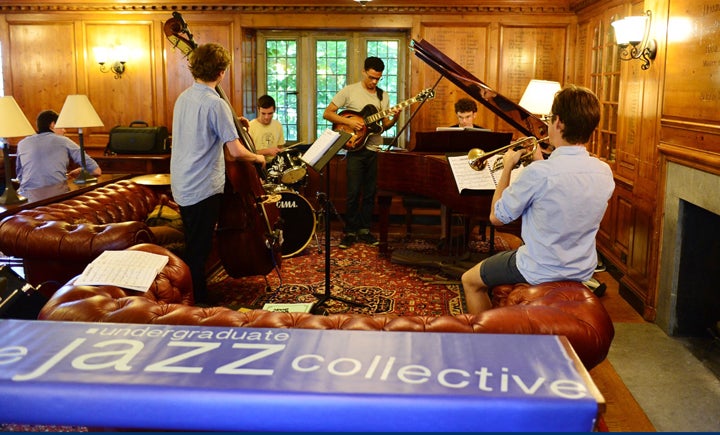 Jazz has deep roots on campus and continues to grow and bloom both inside the classroom and out, with programs and concerts like the longstanding Duke Ellington Jazz Series and the Duke Ellington Fellowship in the School of Music and the newer Jazz Festival at Yale organized by the Yale Undergraduate Jazz Collective.

In advance of the third annual Jazz Festival, YaleNews talked with Calhoun College junior Alexander Dubovoy ’16, an organizer of the Jazz Collective, to get his perspective as a student and musician on the state of jazz around Yale and what the music means to him. The following is an edited transcript of that conversation.

One of the real reasons I was drawn to this art form was the aspect of improvisation. I started piano lessons when I was really little, beginning at 4 years old, but I really didn’t like learning classical music, in that it was just notes thrown at the page and I was told to just read them. What I really enjoyed was playing around and figuring out the sounds I liked.

What I have realized since then is that improvisation is a really important mind set in the context of a liberal arts education — teaching people to be able to cope when thrown into situations of extreme uncertainty. In a jazz jam session, you don’t know what’s going to happen; you don’t know how the other musicians are going to respond. And yet you still have to make something up, and you don’t just have the page to rely on.

Beyond just the incredible musical element, there’s something really fundamental that jazz teaches you about a way of living. There’s a jazz musician persona, a way of being okay with uncertainty and making things up that create a cohesive sound for the group that’s really valuable.

There’s been a great jazz community here for years. The Jazz Collective had existed previously, and we reestablished it in 2012 to try to foster the jazz community further. Yale has such an incredible music scene and so many resources, so there was already of ton of people who were interested. It was not our job to convince people to start playing the music or that jazz at Yale was important; rather, our role has been to build a community around it and connect to each other through jam sessions and concerts. We get people playing with each other and get people who are interested in the music from the playing side and the listening side to know each other and to build friendships. Jazz at Yale has existed for a long time, sometimes in the underground, and we’re trying to bring it into the spotlight.

Has the jazz community on campus grown in recent years?

There’s been exponential growth! If you had asked a few years back what jazz at Yale was like, it was harder to find people who knew, and there weren’t as many ambassadors. Even though there’s not an official undergraduate program in jazz that you can graduate from, there are a number of classes available and a lot of people who are interested in playing this music.

For a lot of prospective students, they are thinking seriously about both what kind of academic environment and what kind of musical environment they want. Now that there are people who can answer those questions from prospective students and pre-frosh, more people who are interested in jazz keep on coming every year. We have an event at the beginning of every school year for frosh, and every year it gets bigger; it doubles or triples every year. The interest keeps on growing, and once you have people playing, more people want to play.

There are four alumni performing in this year’s Jazz Festival at Yale. What have you learned from them and their careers as well as those of other alumni engaged with jazz?

The Yale College Dean’s Office and its Traphagen Fund have been absolutely wonderful in bringing alums back to campus, both for the Underbrook Series and the festival. There was no database of jazz alumni, so a lot of what we’ve found is through word of mouth; people tell us who they played with on campus, and we’ve learned there’s a big network of Yale alumni who are interested in jazz, either pursuing it full time professionally or part time. All of them had the experience of being on a campus without an official undergraduate program, but they too found other people who were interested and found ways to pursue this music outside the curriculum and often went on to do it with their lives and have loved the experience.

One of the things we hear from Yale College alumni is that they value not having gone to an undergraduate conservatory, which has really been interesting. There’s so much you can bring into the music if you’ve had a liberal arts education and studied both jazz and something different and integrated it all. [Pianist and composer] Vijay Iyer, for example, was a physics major in Yale College. He went on to U.C. Berkeley to get his Ph.D. in physics and switched during his doctoral program. There are a lot of things he’s done regarding cognition of music and the science behind it.

We’ve seen that having different areas in your background really informs a unique style of music. It’s been really cool to see people coming from very different areas playing this music and that brings a lot more to it.

Who on the faculty have supported and informed and inspired your work?

There’s a number of faculty who are explicitly teaching jazz music, and there’s also a much wider array of faculty who are dealing with it in terms of historical or societal context.  In the Department of Music, professors who have been particularly supportive for us include Brian Kane, who teaches jazz harmony and music theory, and Michael Veal, who teaches multiple history courses — I’m taking a seminar with him this semester called “Conduction Ensemble” on methods of conducting free improvisation. He’s big in the avant-garde scene and plays in New York in addition to teaching here.

In the School of Music, Willie Ruff has been at the center of jazz at Yale, in New Haven, and well beyond for decades. Professor Ruff teaches the music and its history. There are many, many engaged faculty in African American studies, such as Elizabeth Alexander, who deals with contemporary jazz in the context of contemporary visual art, and Jonathan Holloway, the dean of Yale College, who will be speaking at the Jazz Festival on jazz in the context of African-American history. There are many faculty who come from many different angles who are interested and supportive. We’ve been talking with faculty about the possibility of a more formal jazz program at Yale and have found there’s a lot of interest in the idea.

How has your collaboration with neighbors in New Haven been?

It’s been great! A lot of undergraduates don’t know what a great jazz scene there is in New Haven and what a big part it is of local culture. Coming as a freshman from the West Coast, I didn’t know necessarily what it would be like and how it would compare to what I knew in the San Francisco Bay area. There’s a big infrastructure to support local jazz musicians and a lot of local businesses that support jazz. The 9th Note is a new addition to the scene that’s done a great job with local musicians, as do Firehouse 12, Shoreline Piano, and many others.

Jazz Haven does so much to support the local jazz scene and puts together the annual summer jazz festival on the Green and around town. Everyone has been super-supportive of our Jazz Collective, coming up from a small organization,and blossoming up to what it is today. We could not have done this without the professors and students at Yale, and, likewise, a huge part of our success has been because of the hundreds of local organizations and publications and people who have helped us out.

Your are a history major. How does the study and practice of music play with your studies?

I come at this from two angles — how my studies have intersected with my music and how my music outside the classroom has interacted with my studies. I’ve found ways to study jazz at Yale— the course this semester with Professor Veal, for example — and Professor Kane’s class is on my Yale “bucket list.” So, there are curricular offerings.

Also, I’m studying Russian history, and I’m considering writing my senior essay on the history of Russian jazz, particularly jazz in Soviet times. That would touch on a lot of interesting issues in terms of the culture of the Soviet Union and also the history of jazz. People call jazz the music of freedom, so I’d be looking at what kind of a freedom that might entail and what it means in terms of a regime that the U.S. would deem as un-free; there’s also a lot of Marxist reinterpretations of African-American and jazz history to consider in my research, so I’ve tried to integrate some element of jazz into a seemingly disparate course of study.

Outside of the classroom and the library, I practice piano every day for an hour or two, and rehearse with groups pretty frequently. I play a lot with Newspeak.  We try to rehearse every week and gig in New Haven. It’s also great that Yale and New Haven are so close to New York; if you get a gig in New York, it’s easy to get there by train. I also sing with Red Hot and Blue, a co-ed, a cappella jazz group. The a cappella community at Yale is very involved with the jazz scene — there are a lot of jazz instrumentalists who also sing, and a lot of singers who just love jazz and will come to our Underbook concerts. It’s a lot of stuff “on the side” of studies, but one of the great things about Yale is everyone does a ton of stuff on the side. You can make it work!

What’s on your own playlist these days?

I’ve been trying to study up on all the musicians in the festival, of course. I’ve been studying with Craig Hartley at New Haven’s Neighborhood Music School (NMS), which is another good thing for extracurricular jazz. While there may not be official jazz teachers at Yale who you can take private lessons with, there are people at NMS, which is right next to campus and super-convenient. Craig has been recommending people I should listen to from the history, like [pianists] Lennie Tristano and Oscar Peterson, as well as newer artists like Robert Glasper.

There’s also so much that’s happening with jazz today to push it forward and integrate with other things happening to music in recent years that hasn’t been quite brought into the tradition yet — all kinds of people mixing-in hip-hop and other influences. [Trumpeter] Takuya Kuroda is someone who’s trying to bring jazz forward and integrate it in a way like Robert Glasper has and bring in new kinds of rhythmic influences.