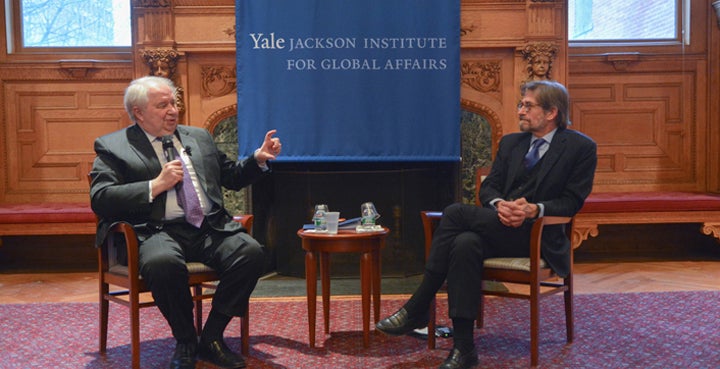 Alluding to U.S. Secretary of State John Kerry’s assertion last fall that current conflicts between Russia and the United States make the Cold War look “easy,” Kislyak told his audience in Horchow Hall that the Cold War was a result of major “ideological” differences between the countries. Today, he said, Russia is a “young democracy” that has aligned with the United States to tackle such important issues as the removal of chemical weapons from Syria — yet diverges in its “narrative” on others.

Kislyak gave an address and took part in a conversation with Thomas Graham, a senior fellow at the Jackson Institute, before answering questions from the audience. His visit was the inaugural event hosted by The MacMillan Center’s interdisciplinary Russian Studies Project and the first lecture in the project’s series “Contemporary Thinkers: Focus Russia.”

Kislyak cited three causes for the deteriorating relations between the United States and Russia: his country’s granting of temporary asylum to Edward Snowden; American (and international) protests at the 2014 Sochi Olympics of Russia’s treatment of gay, lesbian, bisexual, and transsexual people; and the violent conflict in the Ukraine.

Noting that the U.S. State Department revoked Snowden’s passport while he was in Moscow, Kislyak said that Snowden’s presence there put Russia in an awkward situation.

“He doesn’t have a Russian visa,” says Kislyak. “It’s bizarre to be put in the middle. The U.S. told us it wanted him extradited … but we don’t have a legal basis to deal with this request [an extradition agreement]. Snowden came as a free man who didn’t violate any Russian laws. There was no way we could do it — extradite him— and the U.S. got irritated, to describe it politely.”

Kislyak said the even before the Snowden affair came to a head, U.S.-Russian relations became tense when, on the eve of Russia’s first Winter Olympics last year, international pressure on the subject of “non-traditional relations between genders” ruined the celebratory atmosphere.

”We wanted to invite young people from all over the world to enjoy good sports, each other, and to see that Russia is a normal country,” the ambassador stated. He called the campaign against Russia’s treatment of gay people an “unnecessary and misguided” attempt to impose the American viewpoint, adding, “Russia is a conservative country.”

He also criticized American characterizations during the Olympics of Russia as a “war zone.”

“There was no war zone in Russia,” said the ambassador. He added that he begins his days reading press clips from the American media, and questioned: “Is there anything positive you can report?”

The conflict in the Ukraine, Kislyak told his audience, has brought American-Russian tensions to a “maximum temperature.”

He described the demonstrations and regime change in Ukraine as an “armed, unconstitutional overthrow of a legitimately elected government” and said, “I cannot imagine that would be tolerated in the United States for one minute.” He called the political activists a “well-organized militant group” which has used violence to achieve its ends, and he defended the annexation of Crimea by saying that Crimeans are wholly Russian in culture and life, and “didn’t accept” seeing “their country stolen from them.” He argued that the citizens of eastern Ukraine have  “a right for self-determination.”

Kislyak maintained that Russia has tried to negotiate with the new Ukrainian government since the start of the conflict but said that its “shelling of its own people,” along with imposed travel restrictions and the blockade, have intensified the divisions in the country.

“The longer it continues, the more hatred they produce,” he said of the anti-Russian factions.

Recently, Kislyak said, a BBC report showed a group of “Skinheads” patrolling the streets of Kiev while wearing SS insignia, reminiscent of Nazi Germany. That Nazi sympathizers would be in any position of authority in Kiev, he said, is “incomprehensible” to the majority of Russians.

Aside from these conflicts, Kislyak said that his nation and the United States have worked together for international benefit. He cited the countries’ collaborations in space as a meaningful partnership, and noted that both countries have joined to fight international terrorism, inter-ethnic hatred, and international crime, as well as to work together to put a halt to weapons of mass destruction.

“Today, all chemical weapons have been taken out of Syria by Russia and America,” said Kislyak.

Even with the current escalation of tensions, he said, “The most important challenges for the U.S. and Russia are very similar. We are bound to work on them together if we want to get them solved.”

However, for the two countries to be on more friendly terms, the United States must be willing “to treat us the way you want us to treat you,” Kislyak maintained.

“The United States thinks it’s an exceptional nation,” and has a tendency to “impose its views,” the ambassador argued. “Russia is self-reliant.”