A lab with a magnetism all its own 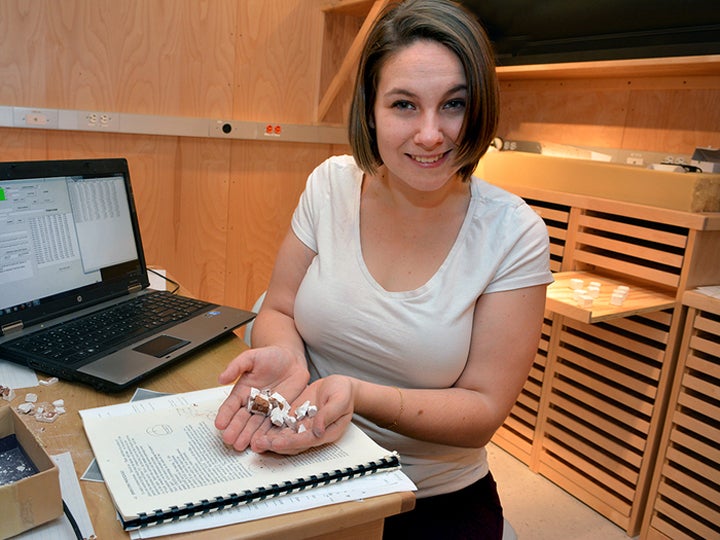 Ariana Fernandez and her magnetometer have a terrific view of Peru.

Admittedly, it’s no postcard image. Fernandez, a senior majoring in archaeological studies, goes in more for soil samples than scenic vistas. Yet with her bits of burnt earth and some world-class technology, she sees South America’s past, present, and geophysical future in stunning detail.

“I’m helping people learn more about past societies, while fulfilling the science-y part of my brain,” Fernandez said, clutching a handful of soil sample cubes on the way to the lab. “What I didn’t expect was that I’d be creating a magnetic dating curve for all of Peru.”

Hers is just one of the research stories playing out at the Yale Archaeomagnetism Laboratory. Set in a remodeled manse on Hillhouse Avenue, the modest lab brings cutting-edge magnetic dating techniques to bear on research projects for archaeologists, geophysicists, and anthropologists across the university.

“This has been years in the making,” said Roderick McIntosh, professor of anthropology and curator of anthropology at the Yale Peabody Museum of Natural History. “It is the only laboratory in the world dedicated to archaeomagnetism.”

Here’s what that means: If a rock, clay, or mineral containing iron ore is heated sufficiently and then cooled, it maintains a specific magnetism, called Thermal Remanent Magnetism. Analysis of the material reveals both the direction and intensity of this magnetism.

Scientists are able to compare that information with changes in the Earth’s magnetic field over time, fixing a date for the cooling event that is accurate to within 11 years. Archaeologists, who often study dynamic civilizations that expanded or changed quickly, have long sought such precision. Radiocarbon dating, by comparison, is accurate only to within 50-100 years.

The Yale lab opened in 2013. It is part of a complex of small laboratories built in the past decade under the auspices of the Yale University Archaeological Laboratories (YUAL) and Yale’s Center for the Study of Ancient Pyro-Technology. The center also has labs devoted to archaeometallurgy and archaeohistology.

“Any way humans have used fire to make things or change their environment, that is what we study,” McIntosh explained.

To conduct archaeomagnetism research, Yale needed to line a room with several layers of steel to shield it from outside magnetic influence. There was only one person in the United States familiar with such construction, a geophysicist from California, and the university brought him to New Haven to build the facility.

The basement lab is outfitted with a full complement of archaeomagnetics gear: A fluxgate magnetometer, to measure magnetization values; a thermal demagnetizer, to prepare samples for measuring intensity; an alternating field demagnetizer, to strip away more recent layers of magnetism; and other equipment to measure the ability of minerals to retain a remanent magnetic field.

Outside of the room, New Haven’s magnetic field is roughly 55,800 nanoTeslas; inside the chamber, it is 100 nanoTeslas. A nanoTesla is a unit of magnetic flux density.

“Basically, we’re walking into the instrument itself,” McIntosh said, pushing through a curtain covered in an image of Aion-Kronos, the Greek god of infinite time.

There, Fernandez was at work on her samples. Many of them were burnt particles of earth she collected last summer from archaeological sites in northern Peru. Her focus is on the Moche civilization, which flourished in Peru from 100 to 800 A.D.

“She is helping improve the regional dating curve for South America that is used to estimate the age of culturally important pottery samples and other heated archaeological objects,” said Joshua Feinberg, associate director of the Institute for Rock Magnetism at the University of Minnesota.

The Yale facility has begun to attract interest from a number of scientists around the country, including Feinberg. “My own research at the University of Minnesota uses mineral magnetism to address questions in both archaeology and geosciences,” Feinberg said. “Given the cutting-edge research being conducted by both Rod McIntosh and [geology and geophysics professor] David Evans, I’m looking forward to spending a lot more time working and learning with the students and researchers at Yale.”

Back in the lab, Fernandez tested each of her samples multiple times. The samples are encased in plaster to maintain their consistency during experiments.

“This is where I spend most of my afternoons and evenings,” she said. Her thoughts then returned to the Moche. “They were such a complex society, as intricate as the Incan societies. Providing archaeologists with another lens through which to date these sites is so rewarding to me.”

Her research will have a wider impact, as well. Few historical markers exist for Earth’s electromagnetic fields in the Southern Hemisphere — most of the readings are taken of the Northern Hemisphere, by geologists — so the measurements Fernandez establishes are likely to be used by researchers for many years.

“Yale is leading the way in using these techniques,” McIntosh said. “When I tell geologists some of the things we’re doing, it blows their minds.”