Chef Mario Batali: On doing business in “the most gastronomically blessed town” 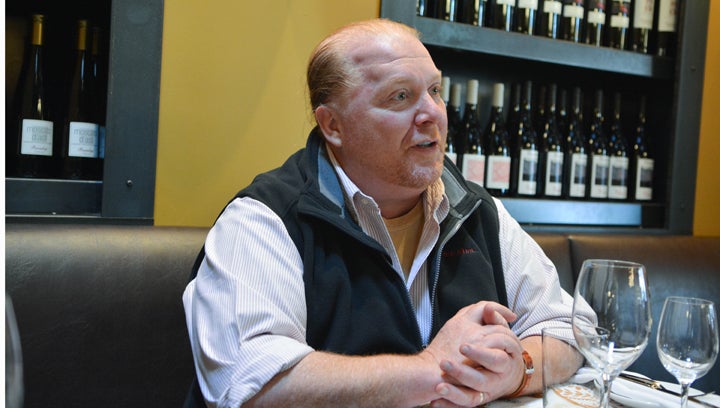 Renowned chef and restaurateur Mario Batali and his partners opened Tarry Lodge New Haven at 278 Park St. in the Broadway district in early November 2014. The trattoria adds to the ongoing New Haven renaissance and is one of the latest tenants of Yale University Properties.

Batali was on campus Jan. 23 to participate in a conversation at the Whitney Humanities Center with Mark Bomford, director of the Yale Sustainable Food Project, including a discussion of Batali’s recently published book “America—Farm to Table.”

During his visit, Batali “tarried” a bit with YaleNews at his newest restaurant to share his views on New Haven, liberal arts, hospitality, hunger, and more (including white- clam pizza pies). An edited transcript of the conversation follows.

We like the Eastern corridor, between New York and Boston. This is probably, in my opinion, the most gastronomically blessed town. To come in here is a remarkable privilege. Also, the Yale group is a fascinating group, and the things that Alice Waters has done makes Yale even more enticing.

This city is the one that gave us the best chance of finding a cosmopolitan and yet comfortable local crowd. And, we like college towns. College kids are a renewable source of customers! We like having the opportunity to be here.

You studied Spanish theater in college at Rutgers. What have you taken from that liberal arts study that has helped enrich your life and career?

Your overall company is called the B&B Hospitality Group. What is your theory and practice of hospitality?

Hospitality is a harmonious activity that happens between a customer and restaurant staff. It’s not one-way. The customer is not always right and we are not always right. The way we can make it the most fun, successful, and pleasurable for all involved is to appreciate each of the artists on every level. Once we do that, then we are creating a vibe that isn’t just a place to eat; it’s a place to live, a place to be, a place to be a part of. If we can become a part of the landscape here in the next year, which is what we are working on, then there is an exchange that goes back and forth. That is what hospitality is: It’s not only one way: it’s learning to grow with each other. It becomes a much more fruitful experience.

The Mario Batali Foundation focuses on children, with emphasis on hunger relief, literacy, and health, and you give a lot of time to charitable endeavors. What motivates your philanthropy — and what you have learned from your community service efforts?

We used to be ranked in the top 10 [nation in the world] in math and sciences. When you look at our high school and college kids, we clearly haven’t invested enough in their infrastructure for them to become what they could be. We’re no longer the most competitive country in the world. We’re certainly one of the most important markets, but we’re not producing the smartest kids. We have to look at all the tools and opportunities, so that we’re the best that we can possibly be. Hunger relief is the first step. 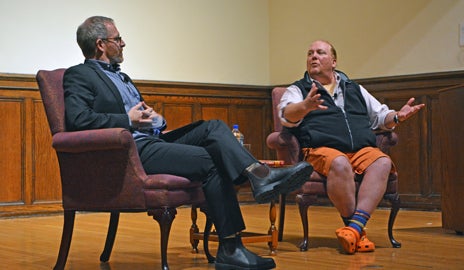 Effectively what we really have [in the United States] is enough food to feed North, Central, and South America — all three. Our biggest problem is waste. It’s not that we need to figure out how to make more food. We have to figure out how to stop throwing so much of it away.

New Haven is a renowned pizza town. Rather than ask the standard question — which pizza place is your favorite — let our readers know what Mario Batali’s favorite pizza toppings are, and why.

One of my favorites is a simple marinara…tomato sauce, a few herbs, a couple slices of garlic, and some hot chilies.

But, if I was in this town, I would probably have to try a white-clam pizza. If I had a shellfish allergy, I might consider suicide! Some of my favorite things in the world are crustaceans and shellfish in any form (raw, cooked poached).  The fact that they can be on a pizza gives me goosebumps!

Your manager here, Steve Bayusik, has said, “New Haven is a very cosmopolitan city. It’s a very smart city. People want what’s trendy, what’s happening.” What do you see as food trends to watch this year?

From my eyes, what people want is to eat delicious foods that sometimes provokes them, but mostly comforts them. We want to be able to ride that edge and give them something that they recognize and, every now and then, challenge them, because we’re thinking and looking at new ingredients or new ideas. We want them to participate with us, so that it’s a growing experience.

There’s a way of looking at a restaurant relationship where you go in, you sit in the same booth, and you have your favorite dish, and your favorite glass of red wine, and we can be that. But we also want to be a place where you might bump into something that you weren’t expecting.

When I’m provoked by a restaurant, it makes me want to go back. Maybe they have these crazy new Ipswich clams, that are a different kind. And they’re serving them on the pizza. Although it’s still a white-clam pizza, maybe there’s something crazy that I can reference: a particular geo-specificity and some piece of the sea, that’s either saltier or brinier or tangier or more mineral flavored, and I can express that to someone. When I can do that, that’s the joy. First of all the joy is finding that clam, second is being able to serve it to someone who thinks, “Wow, this is different. What’s going on here?” That’s the intellectual payoff!