At the intersection of engineering and music, Yale students hit the right notes 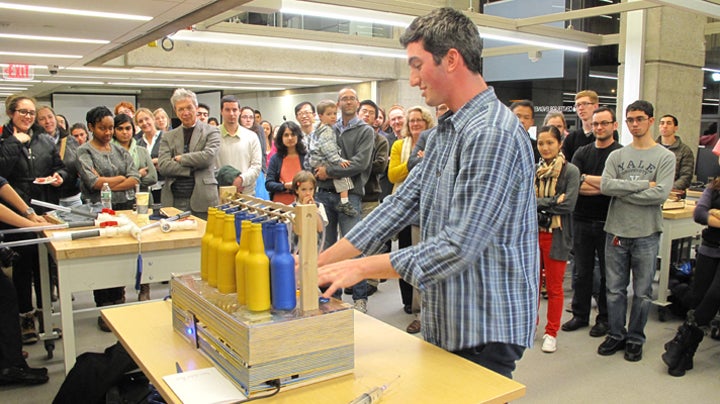 During the holiday season, it’s not unusual to be serenaded by Yale’s many choirs and a cappella ensembles caroling around campus. But this past December, only in Yale’s Center for Engineering Innovation & Design (CEID) could you be treated to an impromptu reggae jam played on one-of-a-kind instruments.

These instruments are particularly special because each was designed, constructed, and played by students enrolled in the CEID’s newest class, “Musical Acoustics & Instrument Design.” Co-taught last fall by Konrad Kaczmarek and Larry Wilen, the class lies at the intersection of engineering, physics, and music — with almost all homework for the class utilizing the CEID’s hands-on workshop setting.

“Like most acoustics courses, we studied the scientific underpinnings for musical tuning and scales alongside the physics of different oscillatory systems, such as vibrating strings and resonating columns of air,” said Kaczmarek, a composer and lecturer in the Department of Music. “But unlike most acoustics courses, students then explored these acoustic properties by building their own instruments.”

The result was a class with learning opportunities that went far beyond theory. “Our ultimate goal was for students to build a musical instrument of their own making,” said Wilen, a CEID design mentor and senior research scientist in the School of Engineering & Applied Science. “To this end, we taught them to use engineering tools such as 3D printers, laser cutters, and SolidWorks — a computer program that allows you not only to design three-dimensional objects that you can then go make in the shop, but also enables an analysis of the structural integrity and even actual dynamic frequency modes of a vibrating solid body.”

The physics and engineering were then combined in the semester’s laboratory assignments, where the students built xylophones, simple wind and string instruments, and, by the end of the semester, electronic instruments that utilized circuits, soldered wires, and custom software to control microprocessors. These labs also served as opportunities for the students to refine their design skills and discover what design challenges they might need to overcome in their final projects.

“While making something, you gain new ideas, and you realize that you could — and might even wish to — use all the parts of your original design to construct something entirely different,” said Wilen. “And those changes also deepen your understanding of the basic physics of an instrument — much more than an equation on the board explaining that same concept.”

A symphony of creation

Prepared by their lab assignments, the students’ final task was to invent their own instruments. With mentorship and technical support from the staff, they were encouraged to let their creativity reign. “The final designs grew out of each student’s own ideas, their own creations,” said engineering doctoral student Thibault Bertrand, who served as teaching fellow for the class. “Each instrument was an expression of the student’s own interests.”

A prime example of that expression is the “Lothlóritar,” a stringed instrument that can only be played by two people working together. “I wanted to create an instrument that would inspire collaboration,” said Yale College junior Catherine Jameson, who designed the instrument.

Built from wood sustainably harvested from the Yale Myers Forest, the Lothlóritar has four steel wire strings divided evenly over two fret boards. Performers face one another with the instrument between them, each fretting two of the strings while plucking the other two strings.

“It becomes almost like a game to figure out how to play together,” said Jameson. And in that spirit, she left the instrument in the CEID for all of finals week, accompanied by instructions that would encourage making music together.

Yale College senior Rachel Perfecto used her instrument, the “Clip-B-Audio,” to take the concept of “instructions” even further, making them a playable part of the instrument. “My goal was to make an instrument that really could draw music,” she said. “What if with just a blank piece of paper and a pencil, you could create a melody?”

Perfecto, inspired by a similar invention called the Drawdio, learned that electric current could travel through pencil graphite, including lines drawn on paper. By attaching wires from a microprocessor to the pencil and the metal clip on a clipboard, she creates an electric circuit whenever a drawn line connects her pencil to the clip. Lines drawn close to the clip produce higher current — and therefore higher notes — than lines drawn farther away.

“I’m excited to show it to my friends who are art majors, just to see what they do with it,” said Perfecto. “Or maybe this is how I’ll take my notes in class from now on?”

Perfecto wasn’t the only student directly influenced by instruments from the past. Yale College freshman Prawat “Pong” Trairatvorakul, a violinist and double major in electrical engineering and computing & the arts, found his inspiration in the theremin, an early electronic instrument played using two proximity-sensing antennas. Trairatvorakul translated that concept into an electronic cello that, instead of strings, uses fretboard-length touch pads connected to a potentiometer to identify what note the musician wishes to play.

Trairatvorakul’s “Potenciello” further differs from the theremin by incorporating a high-tech “bow” to control the musical articulation. Because there are no strings, however, this bow is connected to a small motor, a force sensor, and an accelerometer, which together translate the speed and angle of the bow into digital information about which “string” is being played, at what volume, and in what way. “Anyone who already knows how to play the cello can play the Potenciello,” said Trairatvorakul. “With the Potenciello, I’m translating the same physical movements into new sounds.”

In fact, many students chose to pursue sounds that they hadn’t heard before. Yale College sophomore Victor Liu, a double major in electrical engineering and computer science, developed a computer program and pickup system that turns a guitar into a versatile synthesizer, while Yale College senior Clinton Wang created an electronic instrument that could play musical scales most often used in non-Western music. And Yale College sophomore Julien Soros’ “Siren Song” has an eerie, warbling sound that translates light pulses into musical notes.

The pursuit of the new is especially important for film composers. “All the composers in Hollywood are looking for new sounds that stand out,” said Yale College sophomore Jordan Plotner, himself a film composer and American studies major. And that got him thinking: “Why is there no instrument that uses the beautiful sound of blowing across glass bottles?”

In response, Plotner created “Helmholtz’s Harmonious Homebrew.” Composed of 12 glass bottles, each filled with “tuned” amounts of water, the instrument captures that calliope-like tone well, although Plotner was surprised by the difficulty he faced in the design. “To mimic how air escapes out of the lips when blowing across a bottle opening, I took a lot of photos of my mouth,” he said. “After a lot of analysis, I was able to model the shape of my lips into a mouthpiece that I could make on a 3D printer.”

A space for music

That a film composer would become a 3D printer user was no surprise to Wilen, who was quick to point out that the students in the class — whether engineers, musicians, physicists, or even evolutionary biologists — fully met every challenge of the class. “By the end of the course,” he said, “the musicians became incredibly skilled engineers, and the engineers were amazing musicians. That kind of success story is true for every CEID class.”

“The CEID ecosystem is essential to this class,” Kaczmarek added. “Students told us over and over again that they had no idea they could do the things they were doing. And in turn, many of them came up with instruments that could only be built in that environment with those tools — they built instruments they couldn’t build in any other context.”

Students demonstrate the unconventional instruments they created in Yale's "Musical Acoustics and Instrument Design" course at the Center for Engineering Innovation and Design (CEID). The course is an interdisciplinary collaboration between the Department of Music and the CEID.