What if you could tap into the heartbeat of a city, its emotions, its thousands of simultaneous conversations, its concerns, its ever-changing patterns of connections and relationships — through social networks? 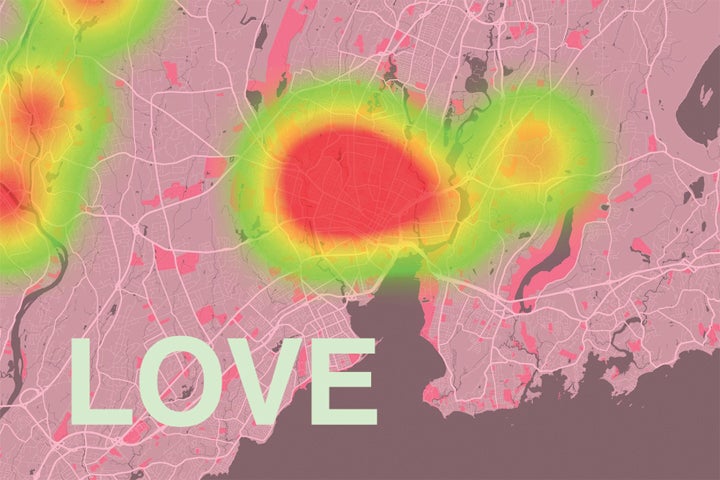 And what if you could use that information to bolster research, to build stronger policies, to create relationships, and to strengthen a community?

In December, in partnership with Yale and the City of New Haven, 2014 Yale World Fellow Salvatore Iaconesi (a philosopher, hacker, and “near-future designer”) will bring his “Human Ecosystems” project to New Haven. The project captures in real time, processes, and visually interprets public conversations happening (in 29 languages) on major social networks in the city of New Haven.

All that information, Iaconesi says, makes up a massive amount of data.

“As citizens, we have no idea how much information we’re producing on an hourly basis,” he explains. “We produce it everyday with our online expressions, but at the moment it’s only the social network operators, large corporations and secret services worldwide that can access them.”

“Human Ecosystems” challenges that status quo, he says, by capturing that data in real time, processing it, and making it completely open-source for members of the community to use.

“With ‘Human Ecosystems,’ we give this data back to the community — we create what can be called a ‘new digital commons,’” says Iaconeso. “And we can teach city administrators, activists, organizers, artists, designers, researchers, and citizens to use the information for their own purposed. They can explore New Haven in completely new ways.”

With his partner, communications scientist Oriana Persico, Iaconesi has lead intensive workshops across the city to teach citizens, students, researchers, designers, administrations, organizations, and companies how to use the data in “positive, participatory, civic, poetic, and beautiful” ways, says Perisco, adding that   the possibilities are endless.

“You can tap into ‘Human Ecosystems’ and discover the emotions of an entire city,” she explains. “You can find out where there is joy, love, hate, anxiety, even a sense of financial or physical insecurity. You can see where certain communities and cultures gather, how and why they come together or separate, and what influences them.”

With that in mind, Persico and Iaconesi are working closely with the Yale Center of Emotional Intelligence.

“Capturing the feelings and emotions of the public in real time and allowing those who generate such data to analyze and manipulate it provides us with valuable tools to better understand our emotional lives,” says David Caruso, special assistant to the dean of Yale College and research affilliate at the center. “And the result is beautiful, it is work of art.”

Yale professor Alan Plattus, director of the Yale Urban Design Workshop and professor of architecture and urbanism, has also been working alongside Persico and Iaconesi this semester and says he looks forward to tapping into the project and collaborating with the pair in the future.

“Getting to know Salvatore and Oriana and their innovative and important work has been yet another example of the ways in which the World Fellows program informs and energizes Yale faculty like me,” he says. “Their use of social media to document and map the densely layered networks of relationships, ideas, and desires in cities around the world, makes vivid, visible, and accessible some of the most valuable aspects of urban life that many of us recognized intuitively, but can now visualize and work with thanks to this exciting new methodology.”

Iaconesi says he was immediately captured by the life of New Haven upon his arrival at Yale in September.

“I have found the city incredible, with its campus, cultures, and initiatives, with an energetic community and so many public spaces,” says Iaconesi. “But as with all cities in the world, it’s also a space of differences and distances. We’re trying to understand what opportunities for interconnection are being missed here.”

The Grove New Haven — an innovative, co-working space that works to support innovation across the city and create collaborative connections between citizens —has hosted a number of ‘Human Ecosystems’ workshops and presentations for its own members and the public.

“This project embodies the heart of collaboration and innovation, weaving together the expressions of New Haven through open sourcing,” says Christina Kane, director of culture at The Grove. “It’s social genius.”

New Haven’s City Hall will host the Human Ecosystems exhibit Dec. 9-12; the display will include both visualizations and interactive activities. There is incredible potential, Iaconesi says, for this project to thrive in the city. In partnership with city administration and Yale, Persico and Iaconesi are working to find the project a permanent home in the community — what they describe as a “Real Time Museum of the City.”

This won’t be a typical musuem, Iaconesi explains. Visitors won’t see paintings or statues, but instead graphics and visualizations of the relationships and connections across their city. And those interactive “maps” can be used to ask important questions directly to the city by combining topics, emotions, and languages. Part of the museum will function as a sort of planetarium, with people represented as stars, and constellations illustrating the relationships between them, he says.

“When you ask the visualization certain questions, parts of this solar system lights up,” Iaconesi explained in an October interview with the Yale Herald. “By seeing this visual map of your city, you find communities, and you can find where you fit in your community and where people are concentrated who care about the same civic issues as you do.”

Finally, the Real Time Museum will host a laboratory of sorts. “It will be a place where citizens of all stripes can learn to use the ‘Human Ecosystem,’ to research complex scientific and social issues, to create civic engagement and action, to create new forms forms of social innovation practices and services, and to discover new ways to organize citizens,” ” says Persico.

Created in 2013, the project has already been to Rome, Sao Paulo, Montreal, Toronto, Cairo, Istanbul, and Hong Kong. In the next few years it will move across the globe.

“Our desire as humans is to interconnect,” says Iaconesi. “Through ‘Human Ecosystems,’ New Haven’s diverse communities can learn, together, how to tap into the massive amount of data available in the Digital Public Space to create awareness, shared knowledge, civic movement, art and communal action.”

There will be an opening ceremony for the exhibit on Tuesday, Dec. 9 at 10:30 a.m. at New Haven City Hall, 165 Church St. There will be a closing party on Friday, Dec. 12 at 4 p.m. at the Yale Center for Engineering Innovation and Design, 14 Prospect St.

For more information about the exhibit, visit: http://worldfellows.yale.edu/human-ecosystems-new-haven.