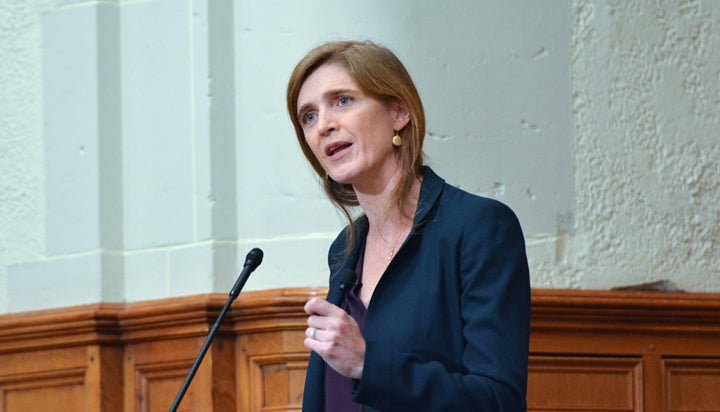 In today’s interconnected world, the United States cannot afford not to take a lead in dealing with crises such as the Ebola epidemic in West Africa, Russian aggression in the Ukraine, and a string of brutal executions by ISOL, U.S. permanent representative to the United Nations Samantha Power ’92 said during her visit to Yale as a Chubb Fellow on Dec. 1.

To tackle these and other world issues, the nation must both collaborate with the international community and respond to the crises with long-term solutions, she told a packed audience in the Law School’s Levinson Auditorium.

“We need to shape a world where such threats are less likely to arise in the first place,” Power said. “This sounds so obvious, I know, and yet generations of policymakers across the political spectrum have struggled to dedicate the bandwidth, financial resources, and diplomatic and political capital to make these long-term investments. As someone who came into government fully convinced of the critical importance of seeing beyond the crisis of the moment, I can tell you it is surprisingly challenging in practice.”

She added that current world crises — such as Ebola or the abduction of children who are being forced to fight in civil wars in south Sudan — are often “so immense and so complex that even if America wanted to tackle any one of them alone, we would not be able to do it.

“We need to rally the international community to our side,” she continued.

Power cited three examples of current world problems that must be confronted using long-term international strategies: curbing the spread of Ebola, protecting the rights of women and girls, and countering violent extremism.

“We have to put out a lot of fires in the here and now, but we cannot let the immediacy of today’s crises distract us from playing a smart game that will create more stability and security in the long run,” she said.

She outlined some of the longer-range solutions to the Ebola outbreak, including efforts taken by the United States to construct Ebola treatment units and training Liberian and other health care workers. In September, she noted, the United States chaired the first-ever emergency meeting of the U.N. Security Council on a public health crisis and mobilized 133 other nations — the most in the history of the U.N. to co-sponsor a Security Council resolution — declaring Ebola a threat to international peace and security.

Power said that the collective response has begun to yield results. With international support, for example, the time it takes to get Ebola test results in Liberian clinics has decreased from five days to less than five hours.

Nevertheless, she said, “It would be a huge mistake to think that because we are seeing results, we are close to stopping this outbreak. We’re not.”

She noted that in Sierra Leone the disease is spreading quickly, and the country lacks basic resources. Some 4,000 children in West Africa are now orphans, and those who have been cured of Ebola are being stigmatized and often run out of their own communities, she told the audience.

Prior to the Ebola outbreak, the public health services in Guinea, Liberia, and Sierra Leone were already “stretched beyond capacity just to meet the day-to-day needs” of patients, according to Power. Liberia had approximately 50 doctors serving the entire country — a ratio of 1 doctor for every 100,000 people, she said.

“The United States, by contrast, has 245 doctors for every 100,000 people,” commented Powers. “Yale-New Haven Hospital, just one of 50 hospitals in Connecticut alone, has more than 600 resident physicians. The Yale School of Medicine graduates in a single class over 10 times the number of doctors that worked in Liberia before the virus began taking some of the best nurses and doctors. Ebola has killed more than 330 health care workers in West Africa.”

Power told her audience that long-term planning involves preparing to prevent the next infectious outbreak that could have global consequences, be it Ebola, SARS, MERS, or something else. In February 2014, the United States launched the Global Health Security Agenda (GHSA) to help countries prevent, detect, and respond to outbreaks before they become epidemics by boosting immunization rates and improving nations’ laboratory, surveillance, and tracking systems, among other measures.

“GHSA is predicated on the understanding that in a world where the outbreak can start in the forest of Guinea, disease can quickly spread across borders, continents, even oceans. A weakness in any part of our interconnected global health security system is a threat to all of us,” she said.

President Obama’s Young African Leaders Initiative, which brought its first class of 20 rising leaders to U.S. universities, including Yale, for leadership training this summer, is also geared to preparing for the future, she said.

Stopping gender-based violence — whether during times of conflict or not — must be another U.S. priority, Power emphasized, including on college campuses. One critical initiative is to help prepare U.N. peacekeepers to “do better at protecting women and girls,” she said, noting that between 2007 and 2013, U.N. peacekeepers didn’t intervene in 507 attacks on females.

The longer-term solution to halting such violence, Power noted, is empowering women and girls by educating them.

“Countries that educate girls are more peaceful, more democratic, more prosperous, and more healthy,” Power stated. She said that there are currently 62 million school-aged girls worldwide who are not in school — 30 million of those are in sub-Saharan Africa.

“The only way to overcome obstacles to empowerment is to challenge the idea that education for girls is a privilege, or even a threat, when it is a right,” Power told her audience.

Focusing on long-term solutions to violent extremism is particularly challenging, Power said. She noted that ISOL has abducted women and girls, auctioned them off, and raped them systematically, in addition to barbaric acts of violence against Westerners. Some 16,000 people traveled to Syria from 90 different countries to join ISOL as fighters.

“[We can’t halt extremism] if we do not play a long game in addressing the hatred fueled by groups and the reasons these groups are drawn to this ideology,” Power said. “ISOL’s barbarism is fueled by the Assad regime. … We can’t partner with Assad. In Syria, the enemy of our enemy is not, and never will be, our friend.”

One long-term response to extremism, Power told her audience, is to “lift up the voices of those who denounce terrorism,” particularly the voices of peaceful Muslims.

In addition, she said, in accordance with President Obama’s wishes, Guantanamo Bay must be closed. She pointed out that Congress has halted the closing by insisting on severe restrictions for the transfer of the 142 detainees that are there.

“As a U.S. diplomat, I can’t tell you how often other governments point to Gitmo as a way to defend their practices,” Power said. “Extremist groups use Guantanamo as a recruitment tool.”

Power concluded by saying that the United States, with help from global partners, must continue to be a leader in helping to advance people across the world.

“It is and must be a constant,” said Power. “It is not a burden that weighs us down. It is a wind that lifts us up.”