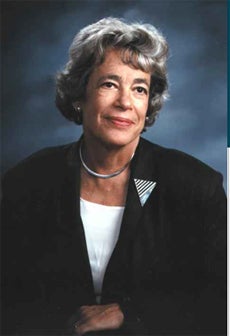 Elga R. Wasserman, who as special assistant to former Yale President Kingman Brewster oversaw the early years of co-education at Yale, died on Nov. 11 at the age of 90.

Wasserman was an expert on issues facing women and other minority populations in academia. She was charged by Brewster with overseeing the entrance of the first co-educational class at Yale College and then managed some of the academic aspects of the next four classes to include women. In addition to university administration, she also held careers in science, activism, family law, and publishing.

Born on June 30, 1924 in Berlin, Germany, Wasserman immigrated with her family to the United States while a teenager, settling in Great Neck, New York. She attended Smith College, where she organized civil rights protests during the early 1940s. In 1945 she accepted a graduate fellowship to study organic chemistry at Harvard University, becoming one of only two female students in the department at that time. A year later she met her future husband, Harry Wasserman, a fellow chemist. They married in 1947 and moved to New Haven a year later, when Harry Wasserman began his long career on the Yale faculty.

Wasserman worked as a research assistant and held part-time teaching appointments at Southern Connecticut State University and Quinnipiac College, and she also worked part-time in industry. In 1962 she became an assistant dean at the Yale Graduate School of Arts & Sciences, with responsibility for the physical and biological sciences. Brewster appointed her in 1969 as special assistant on the education of women and chair of the Committee on Coeducation, and Wasserman devoted the next four years to guiding Yale on its coeducational course, dealing with such issues as admissions criteria, housing, and various academic matters.

After the first year of coeducation, Wasserman wrote: “Women students need an unusual sense of self to persevere in a predominately male setting.” In an interview with the Yale Alumni Magazine years later, she noted the wide media coverage the university received by becoming coeducational. “[T]he media were all over the campus,” she said in the interview. “You would think we were admitting women to a college on the moon. They wanted to televise classes. We had admitted women knowing they would be in a fishbowl, and we took women who we thought were sturdy.”

Henry “Sam” Chauncey Jr. ’57, who as special assistant to Brewster handled the administrative aspects of the transition to co-education and who also served during his long career at Yale as secretary of the university, says of Wasserman: “Elga approached her work in co-education with diplomacy, firmness, and creative thinking. She knew there were those at Yale who opposed co-education and she handled them with tact and skill. But when it came to crucial issues, she knew how to stand her ground and make sure the women of Yale got the best Yale could offer. Both in terms of the academic realm and the extracurricular world, she wanted the new women to have the best. She was sensible and knew when an idea was too expensive, but she could make the very best out of what was available.

“No single person did more to assure that co-education went well than Elga, and today’s Yale women owe her a great debt of gratitude,” he continues. “She was a joy to work with, for she had a wonderful sense of humor and never took herself too seriously. She was a wonderful friend.”

Wasserman left her Yale post in 1972 but returned in 1976, at the age of 49, to attend the Yale Law School. She graduated in 1976 and clerked for the U.S. Court of Appeals, Second Circuit before beginning a private family law practice. She retired from the law in 1995 to take on a new project, a study of women who had been appointed to the National Academy of Sciences. That research led to her book “The Door in the Dream: Conversations with Eminent Women in Science,” published in 2000. Following the book’s publication, Wasserman lectured widely on the challenges facing women in academia and beyond.

Wasserman lived in Lexington and Wellfleet, Massachusetts, and was active in civic and political affairs. She was predeceased by her husband and by her brother, Andor Steinherz. She is survived by her children and their spouses Daniel (Christine Chinlund), Diana (John Glazer), and Steven (Gabriele Wienhaussen), and by seven grandchildren and one great-grandchild.

Donations in her memory may be made to Planned Parenthood or VNA Hospice Care of Woburn, Massachusetts.