Ties and other buys at the Hunger & Homelessness Auction 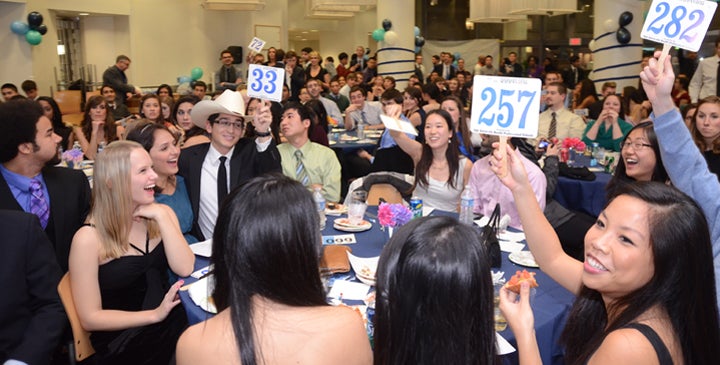 An elegant bow tie from my personal collection. Worn in the lab, but not too often. Value: $52.

That is the humble description of what is destined to be a much-sought-after item on the auctioneer’s block at the 2014 Hunger & Homelessness Auction on Thursday, Nov. 20.

It has become a tradition for anatomy professor William B. Stewart, a neckware aficionado, to donate one of his bow ties for the auction, which is organized by Yale health professional students.

It’s pretty much a given who the successful bidders will be, though.

The H&H Auction was established by a small group of medical students in 1993 to raise awareness about and alleviate the adversity caused by hunger and homelessness in the Greater New Haven area. The proceeds go to local organizations focused on key social issues.

Today the auction is a much-anticipated event on the medical campus calendar — even the dean has it on his schedule — and a major endeavor. There are 15 subcommittees of about 100 first- and second-year students who plan all aspects of the affair, from choosing the decorations to lining up entertainment, to organizing the special events that precede auction night, to determining which community organizations will benefit from the monies raised.

Jaji and Vera first heard about the auction during their admission interviews. (It is #11 in the online list of 100 Reasons to attend the Yale School of Medicine.) They agreed to chair the event in part, they say, because it was an opportunity to meet more members of the medical community. Faculty, students, staff, administrators, and alumni from the Schools of Medicine, Nursing, and Public Health take part in the affair — be it as donors, buyers, or even auctioneers.

The items up for bid range from the sublime (roundtrip by limo to New York City for dinner and an exhibit) to the silly (a one-hour group twerking lesson) to the practical (personal suturing and knot-tying lesson; pig feet and suture material provided).

While some of the things on auction are actual items (a signed Brain Society poster, a Casio keyboard), the majority are services (home-baked goods, home-cooked gourmet dinners, hand-knit clothing, hand-drawn portraits). Bidders can win lessons on everything from the above-mentioned suturing  — which every medical student has to master, note Jaji and Vera — to playing the guitar, driving a stick-shift, country line dancing, speaking Spanish, and honing one’s frisbee skills.

“It’s kind of like a Secret Santa, where we’re giving each other gifts,” says Vera. “Everyone has a talent or something to give of themselves.” For the second year, Jaji herself is offering to cook a dinner featuring the cuisine of her homeland, Nigeria.

Some of this year’s big-ticket items include lunch with President Peter Salovey; dinner and wine-tasting with medical school dean Dr. Robert Alpern; a week in June at a house on Martha’s Vineyard; and a three-hour cruise of New Haven Harbor aboard a 38-foot sloop.

Some of the donated items are designed for groups, so students often take a cue from the PA students and pool their funds to secure a winning bid, note the co-chairs.

In the week prior to the auction, there is a series of events designed to raise awareness about the impact of hunger and homelessness on the community and to raise additional funds. The latter includes the annual football game between first- and second-year students — although the coveted H&H Cup will not go to the winning team this year, but will instead be auctioned off to the highest bidder (football skills notwithstanding).

Noting that many health professional students already volunteer with community organizations, Vera says the H&H Auction represents a chance to do even more. “It’s one thing to donate your time,” he says, “but this is an opportunity to donate needed resources.”

The auction itself is divided into two parts: a silent auction that begins at 5 p.m. in the ballroom of Edward S. Harkness, 367 Cedar St.; and a live auction at 6 p.m. in the hall’s Marigolds dining room.

Jaji and Vera say they’re excited to be part of such a deep-rooted medical school tradition, especially one that has the potential to change the lives of people in the community.

Recalling a story she read recently about how Columbus House helped a homeless man to re-establish his official identity, which had become lost within the system, Jaji says, “For me, that’s what all this is about — giving people a second chance.”

Donations to the auction are being accepted through Nov. 17. To donate or to see a list of items up for bid, visit the Hunger and Homelessness Auction website.