At a recent forum hosted by U.N. Women and the Mary Robinson Foundation, Yale freshman Riddhima Yadav addressed a group of world leaders and offered this bit of wisdom: “We must create the future by design, not by accident.”
By Susan Gonzalez
Share this with Facebook Share this with Twitter Share this with LinkedIn Share this with Email Print this

At a recent forum hosted by U.N. Women and the Mary Robinson Foundation, Yale freshman Riddhima Yadav addressed a group of world leaders and offered this bit of wisdom: “We must create the future by design, not by accident.”

The Yale student was one of eight panelists — and the youngest — for the “Leader’s Forum on Women Leading the Way — Raising Ambition for Climate Action,” which took place in New York City on the eve of the U.N. Climate Summit in September. The event was attended by more than 130 women leaders from across the globe, including a half-dozen former heads of state, as well as by President Michelle Bachelet of Chile and Peru’s First Lady Nadine Heredia de Humala.

The 19-year-old Yadav was not in the least bit fazed by her youth as she emphasized in her address the importance of women’s voices in policy-making regarding climate change.

“You don’t need to be older to be able to do something. Age is just a number,” says Yadav, adding that she also believes that her peers — both women and men — have much to offer to the conversation about how to create a more sustainable future for the planet.

After the forum, U.N. Women executive director Phumzile Mlambo-Ngcuka — who hosted the event with Mary Robinson, former president of Ireland and founder of the Mary Robinson Foundation — told Yadav that she wrote down the Yale student’s quote about creating the future, and would leave it on her desk so she could be reminded of it daily.

Yadav recently spoke to YaleNews about her mission to help design a more sustainable world. Here is what we learned.

From local to global: Yadav’s interest in environmental issues began when she was in junior school in her native India.

“I witnessed local problems around me, simple things like the agricultural fields being converted into concrete jungles, the erosion of native wildlife, and a change in the way indigenous people respond to all of this,” says the freshman, who has also lived in Indonesia and the United Kingdom. “It was a culmination of all these factors that made me take the first step.”

Describing her decision to do something to help with those problems, Yadav quotes the Chinese Tao philosopher Lao Tzu: “ ‘The journey of a thousand miles begins with a single step.’

“My first step [at the age of 13] was to create a task force — Youth for the Environment — that conducted several community-level campaigns,” she continues. “Then I did a feature for [the Indian news channel] CNN IBN as a citizen journalist and worked with a couple of organizations like the World Wildlife Fund and The Energy Resources Institute. My initial interest in local environmental problems eventually grew to encompass national and international concerns.”

A youth leader: By high school, Yadav was being recognized for her environmental advocacy work. She was selected in 2011 to attend the National Geographic Student Expedition to Costa Rica for Biodiversity and Conservation, and subsequently was chosen to speak at the United Nations Environment Programme’s Tunza Asia Pacific Conference, the Asia Youth Leader’s Summit, and TEDxYouth@Chennai.

“Taking part in national and international programs and conferences gave me a lot of insight into what people all over the world were doing to address specific issues, and also gave me experience in and exposure to different topics within the environment as a whole,” Yadav recounts. 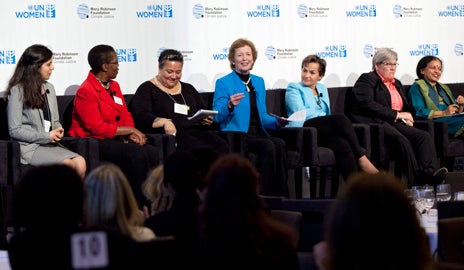 A calling: One of the groups that Yadav joined was YOUNGO, the youth constituency of the U.N. Framework Convention on Climate Change (UNFCCC). YOUNGO invited young people who have been working on climate change and sustainable development to apply for the chance to take part in the U.N. Women forum.

“It was a big honor to be selected to share the dais with these amazing women leaders,” says Yadav, whose fellow panelists included Helen Clark, administrator of the U.N. Development Programme, and Costa Rican diplomat Christiana Figueres, executive secretary and Climate Change Secretariat for the UNFCCC.

In her address to the world leaders, Yadav underscored the importance of international efforts to promote gender equality and female literacy, which she said are integral to sustainability initiatives.

“As has often been noted, women tend to be severely affected by climate change, and the welfare of women is often put second to that of men when it comes to natural disasters that have been induced by climate change,” Yadav comments. “Yet, from the local level on up to the officers of international organizations or at the United Nations, there isn’t much representation by women in terms of decision-making about climate change.”

Changing biosphere: Yadav acknowledges that convincing others of the urgency to act on climate change can be challenging.

“The battle to get people to believe that climate change is real is huge,” she says. “For most of us, we see the debate between the environment and development as being on opposing sides. But they are actually on the same side. If you compromise one, you are bound to compromise the other. People say that cutting back on greenhouse gas emissions is going to have damaging effects on our economy, for example, but research has shown that if we don’t do it, somewhere down the line we are bound to have poor growth rates and detrimental economic development.”

It is also difficult for people to believe in the urgency of taking action on climate change if they haven’t themselves been impacted by it in dramatic ways, Yadav adds.

“In terms of climate change as a perceivable threat, most of us don’t see very drastic effects in everyday life,” she says. “I really wouldn’t want that to happen for people to realize how serious a threat this is. We don’t have to have massive events happening every day to show people that the climate is changing. It’s a culmination of events happening across the globe even as we speak — manifest in natural disasters, rainfall patterns, agricultural productivity, and the way that flora and fauna function. There’s just been a shift in the biosphere in all these different categories of life.”

Among like-minded: Yadav’s decision to attend Yale was due, in part, to the passionate advocacy of its students and alumni in the areas of environmental conservation and sustainability, she says.

“Yale has a strong association with environmental programs and organizations, and the School of Forestry & Environmental Science is renowned for programs in sustainability,” remarks Yadav, who plans to major in ethics, politics, and economics, with a focus on the issue of sustainability.

Within her first few weeks on campus, the Yale freshman met with affiliates of the Yale Climate and Energy Institute and the Yale Center for Business & the Environment. She also co-authored a declaration with members of the Yale Student Environmental Coalition urging action on policy initiatives related to climate change, and rallied to get signatures from hundreds of other Yale students. When in New York, Yadav presented the declaration to Lakshmi Puri, the deputy executive director of U.N. Women.

The freshman also took part in the Sept. 21 march in Manhattan in support of climate change action.

A daily focus: Back on campus, environmental advocacy is a part of her daily life, the Yale freshman says.

Yadav says it has been “heartening” to see the various different organizations on campus concerned about sustainable development and green economic growth. “It makes me work and strive harder in my goals,” she says.

One of her future goals is to be a participant in the decision- and policy-making process related to sustainable economic development.

“I hope to participate in international climate change talks and negotiations, probably as the lead negotiator for my country someday,” says the Yale student. “Climate treaties have a tangible impact on the lives of millions of people. It’s just a dream, but we’ll see where it takes me.”

Meanwhile, she is grateful to have an impact in other ways, including working to change attitudes about sustainability.

“Many people equate sustainability with sacrifice,” she says. “But sustainability is not something you have to be burdened with. It’s a way of living, and talking about it is not meant to make someone feel they’ve been living a bad life up till now. It’s just that there’s a better life, and if you want to, you can be part of it!”

She hopes many of her Yale peers who are advocates for the environment will also help in the policy-making realm.

“At many of the conferences I’ve attended, we come together to talk about solutions. In the end, we have to make sure we actually translate that into action. When it comes to the environment we all share, we can’t be skeptical, as that is self-defeating. I am very hopeful about our future.”