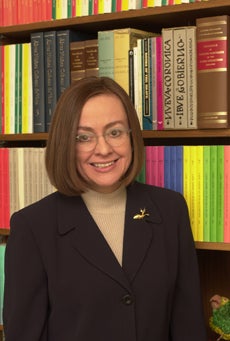 Yale faculty member Rolena Adorno, Sterling Professor of Spanish and chair of the Department of Spanish and Portuguese, has been awarded the Modern Language Association’s (MLA) Lifetime Scholarly Achievement Award.

Adorno is the seventh recipient of the prestigious triennial award, (the first was Yale professor Maynard Mack in 1996). It will be presented on Jan. 10, 2015, at the MLA’s annual convention in Vancouver, British Columbia. In its citation, the MLA described Adorno as “a premier scholar of colonial Spanish American literary and cultural history, a field that she helped bring out of the shadows starting 40 years ago.”

Adorno’s award marks the first time that a scholar from the fields of the Spanish-language literatures (Spanish peninsular, Latin American, Caribbean and Latino) has been so honored. The MLA noted that Adorno is widely credited with “redefining and revitalizing the field of Latin American colonial studies, which she has examined in its fundamental relationship to Spanish peninsular literature of the 16th and 17th centuries (the ‘Golden Age’ of Spanish literature) and in its foundational role in the development of the modern Latin American literary tradition.”

“Rolena Adorno is an exemplary scholar, teacher, and citizen of Yale University, in addition to being internationally respected in her field and for her dedication to the humanities,” said Emily Bakemeier, deputy provost and dean of faculty affairs for the Faculty of Arts & Sciences. “She is world-renowned for her prodigious and erudite scholarship, and she has a steadfast dedication to the highest standards of excellence in the teaching of literature and language in the Department of Spanish and Portuguese.” Bakemeier noted that Adorno is the longest-standing chair of the department, having served three consecutive terms (she begins her fourth term this year).

The cornerstone of Adorno’s scholarship was the study of the work of an indigenous American (Andean) author at the time when everyone believed that “Indians did not write books.” Many scholars have followed her example, and the study of marginal and marginalized writers in all periods of Latin American cultural history has now become canonical. Her work has also influenced the expanding field of North American colonial literary studies.

Adorno’s prize-winning books include “The Polemics of Possession in Spanish American Narrative,” which was awarded the MLA’s Katherine Singer Kovacs Prize and hailed as “a signal achievement for the colonial field and indeed for all periods of Latin American literary studies.” Revealing the interdisciplinary breadth of her work, her co-authored three-volume study, “Álvar Núñez Cabeza de Vaca: His Account, His Life, and the Expedition of Pánfilo de Narváez,” received prizes from the American Historical Association, the Western Historical Association, and the New England Council of Latin American Studies. Her reading of 300 years of Latin American colonial writing is synthesized in her “Colonial Latin American Literature: A Very Short Introduction,” designed for specialist and non-specialist audiences alike.

Adorno has also been an advocate for the digital humanities. With various collaborators, she has prepared critical editions of Álvar Núñez Cabeza de Vaca’s “Relación,” known as the “Naufragios,” and Felipe Guaman Poma de Ayala’s “El primer nueva corónica y buen gobierno,” the autograph manuscript of which has been enrolled in UNESCO’s Memory of the World Register. She was scholarly consultant to the Royal Library of Denmark, which has housed the 1200-page manuscript since the 1660s. Her pioneering print edition of the “Nueva corónica” has been available in digital format on the Royal Library’s website for more than a decade, and she has augmented it with other archival and scholarly sources.

Born and raised on an Iowa farm, Adorno studied Spanish-language literature and culture at the University of Iowa. She received her Ph.D. from Cornell University in 1974 and taught at Syracuse, Ohio State, and Princeton universities and the University of Michigan-Ann Arbor. She joined the Yale senior faculty in 1996.

During her tenure at Yale, Adorno has received the Yale Faculty of Arts and Sciences Graduate Mentor Award and, from the University of Iowa, a Distinguished Alumni Achievement Award. The previous holder of Yale’s Reuben Post Halleck Professorship, in 2012 Adorno was named a Sterling Professor, the highest honor conferred to Yale faculty.

“Her service on national and international boards and panels underscores the high regard in which she is held by so many and it is just one indication of the impact she has had and continues to have in her field and in the humanities more broadly,” said Bakemeier. “Yale is extremely fortunate to have Rolena as a devoted member of our faculty and we celebrate her as we congratulate her on the great honor of being selected to receive the MLA lifetime achievement award.”

The MLA, the largest and one of the oldest American learned societies in the humanities, was established in 1883 to advance literary and linguistic studies. It also hosts conventions and symposia, and works with affiliates to sustain an active publishing program. Its 30,000 members come from all 50 U.S. states and more than 100 countries around the world.