In Malaysian prison, Aishwarya Vijay gains greater insight into the problem of addiction

Recent Yale College graduate Aishwarya Vijay ’14 had never set foot in a prison until she traveled to Malaysia, where her work this summer allowed her to learn about the sometimes subtle connections between stigma and treatment-seeking behavior in injection-drug-using prisoners.
By Susan Gonzalez
Share this with Facebook Share this with Twitter Share this with LinkedIn Share this with Email Print this 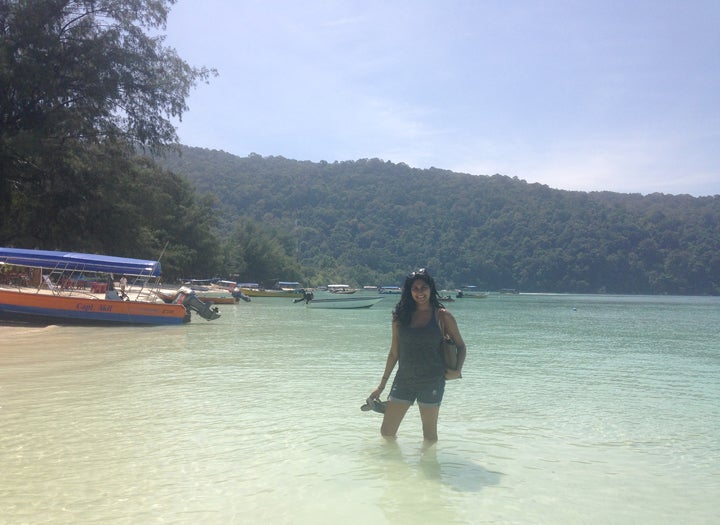 Recent Yale College graduate Aishwarya Vijay ’14 had never set foot in a prison until she traveled to Malaysia, where her work this summer allowed her to learn about the sometimes subtle connections between stigma and treatment-seeking behavior in injection-drug-using prisoners.

While surveying the prisoners at a maximum-security prison just outside of Kuala Lumpur, Vijay — who now works as a postgraduate research fellow at the Yale PET Center in the Department of Diagnostic Radiology — also learned more about the influences of culture and religion on Malaysians’ perceptions of drug treatment programs, such as methadone replacement for heroin addiction.

Specifically, Vijay’s summer research focused on assessing how psychosocial stigma for drug use and HIV status affects how prisoners go about seeking treatment for their illnesses. Her work in Malaysia was under the direction of Dr. Frederick Altice, professor of medicine (infectious diseases) and of epidemiology (microbial diseases) at the School of Medicine, whose work focuses on the interface between infectious diseases and substance abuse. He is also director of clinical and community research, the HIV in Prisons Program, and the Community Health Care Van.

For Vijay, the opportunity to travel to Malaysia — one of a handful of countries where Altice conducts global health research — allowed her to continue exploring a subject that began to interest her as an undergraduate: substance abuse.

Her senior project for her major in electrical engineering was a study of the relationship between behavioral markers, such as craving and feelings of reward, and dopamine release in the brain of smokers. She used PET bioimage analysis to investigate whether physiological differences, such as dopamine release, exist as a result of demographic factors such as gender, ethnicity, smoking history, and level of addiction.

In Malaysia, Vijay was a member of a four-person research team that included Yale School of Public Health student Trena Mukherjee and two research assistants from Malaysia. The team studied the implementation of methadone programs in prisons, surveying prisoners about their drug use history and their attitudes toward opiate replacement therapies such as methadone and buprenorphine, among other topics.

“I had never been to Malaysia before, and the culture is very different from the United States,” says Vijay, who is originally from Iowa. “Drug use is highly punitive in Malaysia. The punishment for drug trafficking is death by hanging. If caught using drugs, an individual almost always goes to prison. The cultural differences also manifest quite prominently in health care: There is a lot of stigma associated with drug use in Malaysia — worse than in the United States — and there are fewer support systems for drug users.”

During her summer in Malaysia, Vijay learned, for example, that those hailing from outside of the country don’t have the same rights to medical treatment as Malaysians. For instance, while all HIV-infected prisoners receive free retroviral treatment as part of a World Health Organization initiative, those who are not Malaysian are not offered that treatment in the hospital.

“A lot of the prison population are from Indonesia or India or China,” says Vijay. “I witnessed one non-native Malaysian with HIV in prison who was on the brink of death, and the hospital stopped his HIV treatment. Being able not only to observe, but work within an entirely different health system, with its advantages and flaws, was an invaluable opportunity.”

The Yale researcher also discovered that in the predominantly Muslim Malaysia, alcohol addiction is viewed as more shameful than drug abuse, and that many drug abusers in the country would prefer to enter a mandatory abstinence center than to be treated with methadone, even though the latter has been proven to be a more effective treatment. The same kind of stigma associated with methadone treatment is also a factor in making needle exchange programs in the country underutilized, Vijay says.

In Malaysia, Vijay also shadowed at a methadone clinic and in the infectious disease unit at the University of Malaysia medical center, and surveyed other stigmatized individuals — sex workers and transgendered persons — about drug use and attitudes about medical treatment.

Her current research at the Yale PET Center focuses on using bioimaging analysis to determine the difference in availability of brain opioid receptors in alcoholics.

“There is reason to believe that those with a family history of alcoholism have a different availability of receptors,” says Vijay. “In essence, we are looking for biomarkers for alcoholism.”

Vijay’s hope is that research being done at Yale eventually will help determine whether certain prescribed addiction treatments — such as naltrexone for alcoholism or nicotine patches for smokers — might only work for certain groups of people with a particular brain biology, but not others. Understanding these biological differences, she says, may lead to more personalized, targeted care for addiction.

“Addiction has long been a field where treatments have a notoriously high rate of ineffectiveness, and more and more, there is evidence that in addicts, brain chemistry has been changed in such a way that a treatment that works for one individual cannot work for another,” Vijay explains.

During her undergraduate years, Vijay volunteered in the pharmacy department of the Haven Free Clinic in Fair Haven, and she now volunteers on the Community Health Care Van, a mobile unit — launched by Altice in 1993 — that provides medical care to patients in low-income neighborhoods around New Haven, including care for HIV/AIDS, substance abuse and dependence, mental health services, and other acute-care needs. She hopes to go to medical school in the future.

“Being in Malaysia made me grateful for the kind of health care we have in the United States, but it also made me realize how much needs to be done at home,” says Vijay. “I see the same marginalized groups here and the same lack of education about treatments and medication. Whether in Malaysia or the United States, what a lot of people suffer from is not having enough access to education about medical care.”

Vijay believes that her engineering background will help her in her future medical career.

“More and more, there is a huge amount of overlap between engineering, public health, and clinical medicine,” says the Yale researcher. “First of all, a lot of medicine is becoming more technology based, from robotic surgery to automated diagnostic tools. But at a more basic level, engineering teaches you a way of thinking that is very important in medicine: You have a big problem, and you have to break it down into small parts and solve it. That is exactly what a lot of medicine is!”