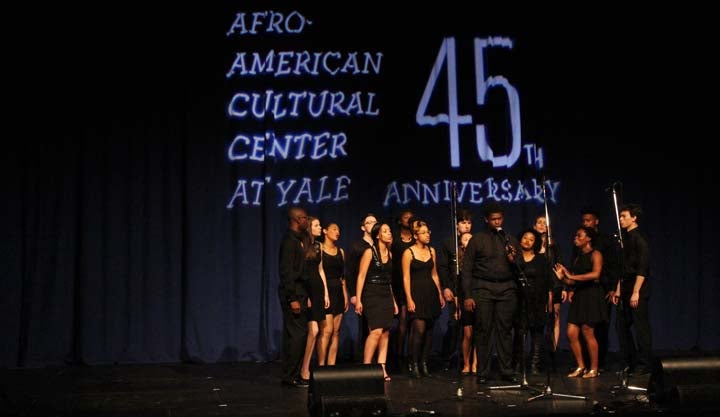 “Do you know what it means for a group of 18- to 21-year-olds to make something so glorious and long-lasting?” asked Caroline Jackson Smith ’74 on Friday, Oct. 17, at the opening of the celebration of the Afro-American Cultural Center (AACC) at Yale’s 45th anniversary.

Herself a former director of “The House,” as the AACC is fondly known, Jackson Smith was speaking to a multi-generational assembly of alumni and current students at “The Founders’ Forum” panel that kicked off three days of events marking the center’s establishment in 1968 by Afro-American students. She and fellow panelists Craig Foster ’69, Ron Howell ’70, Ralph Dawson ’71, and Vera Wells ’71 were among nearly 300 alumni who returned for the anniversary and who were joined over the weekend by more than 100 current students to take part in the celebration’s talks, cultural events, worship, and gala dinner in Commons.

It was a weekend very much focused on the present and future, emphasizing the role “The House” plays today at Yale, in the New Haven community, and beyond, and the vision that the Yale Black Alumni Association (YBAA) and its members have for campus, their home communities, and the world. The weekend’s theme  — “Inspiring Global Leadership in the 21st Century” — was explored in nearly 20 workshops, panel discussions, and plenary meetings on topics ranging from “Black in Blue in Medicine Today” to “Time Talent, and Treasure: Success in the Social Profit Sector,” “Africa Now,” “For God, for Country, and for Yale: Black Yalies in Public Service, Past and Present,” and “From Florida Evans to Olivia Pope: The Current State of Blacks in Hollywood in Front of and Behind the Camera.”

“You have the ability to change lives on a global scale,” said Mark Dollhopf ’77, executive director of the Association of Yale Alumni (AYA, a sponsor of the weekend), at the opening plenary session. Alumni and students shared stories throughout the weekend of work that responded to a challenge Dollhopf posed: “Think about how the gift of the enormous talent represented by the extended family gathered here can change the world.”

“You are Yale, and Yale is yours,” emphasized President Peter Salovey ’86 Ph.D. in his welcoming remarks at a gala dinner on Saturday night. He thanked the founders of “The House” for their courage and effort in paving the way to “make Yale more open, connected, and inclusive.” Salovey also reaffirmed the weekend’s theme of service, saying, “All of us who have received the gift of a Yale education have an obligation to share our gifts with others.”

Salovey saluted the collective effort of the YBAA, noting that its members participate actively in the AYA’s service efforts such as the Yale Day of Service and have also spurred programs like the Summer Institute for the Arts, Y-Apply, and the Higher Education Initiative, often inspired by longstanding student-initiated programs at “The House” such as the Urban Improvement Corps. He also cheered the achievements of individual alumni, noting prominent examples from the last year such as Lupita Nyong’o ’12 M.F.A. winning the Academy Award; Tarell McCraney ’07 M.F.A. winning the MacArthur Fellowship; Peter Mutharika ’66 LL.M., ’69 J.S.D. elected president of Malawi; Cornell W. Brooks ’90 J.D. elected as president of the NAACP; and Toni Harp ’78 M.Ed. elected mayor of New Haven, becoming the first woman ever elected to the city’s highest office. Salovey noted the campus’ pride in the achievements of one of the weekend’s participants, Jonathan Holloway ’95 Ph.D., the new dean of Yale College.

Holloway spoke to the group earlier in the day and encouraged them to engage with the campus now, which he described as a place shaped and improved by the efforts of the AACC over nearly five decades. “The Yale of today is surprising in really wonderful ways,” Holloway said. Noting that the Yale Center for British Art is currently hosting an exhibition titled “Figures of Empire: Slavery and Portraiture in 18th-Century Atlantic Britain,” he said, “There is blackness everywhere.”

Participants expressed appreciation for the anniversary’s many speakers in comments throughout the weekend, including on Twitter and other social media. Nira Hyman ’94 tweeted about the celebration, “So much wisdom, talent & fire in the belly. Thank you to my Yalies.” Scott Clarke ’02 reported that he “was very impressed by the Africa panel and plans to bridge the @Yale networks in the U.S. and the continent.” Pamela Sutton-Wallace ’97 M.P.H. expressed an enthusiasm heard frequently in real-time during the events when she tweeted “absolutely overwhelmed by the brilliance” at #YaleAfAm45, the hashtag for the celebration.

Mindy Marks ’00, director of shared interest groups at the AYA, said she “felt blessed” to have met and heard Jedidah Isler ’14 Ph.D., the first African-American woman to earn a doctorate in astronomy at Yale, who was the keynote speaker at Saturday’s dinner. Marks added that she was inspired by Isler’s address to “be part of the tsunami of change.”

In her address, Isler emphasized that working together at the individual, community, and institutional level can create a “tsunami of STEMicists of color” — science, technology, engineering, and mathematics practitioners who would “change the face of STEM and the community writ large.” The pursuit of this kind of education, she said, “can be a mechanism for social uplift — creating tectonic shifts in the bedrock plates of institutional change and individual support — catalyzing the kind of transformations that will produce the next generation of global STEM leadership.” But Isler did not just extol the virtues of a STEM education “en vacuo,” she advocated strongly for the “sustained interaction and challenge of the broader intellect.” She pointed to successful programs to prepare students for STEM education, like the Posse Foundation, Inc., and the Fisk Vanderbilt Masters-to-Ph.D. Bridge Program, and challenged the Yale community to do more to build on this legacy. Isler urged the audience to help her create an “interdisciplinary, intergenerational, and institutional incubator of black STEM talent” to initiate the “tectonic disturbance and inspire global leadership.”

Amidst the celebration, there was also a strong focus on the need for continued effort to make Yale and places like it — as well as the broader society — even more open and inclusive. Filmmaker Warrington Hudlin ’74, for example, said at the panel on the entertainment industry, “We don’t know who we are as Americans if we keep leaving people out of the story.” The weekend was a time to reflect and renew, according to Rodney T. Cohen, the current director of the AACC, who said, “History serves as a map for us to tell our direction in human history.”

Nicholas Roman Lewis ’93, senior director at the AYA for shared interest groups, emphasized the importance of such celebrations for learning from the past, in the present, in order to make progress in the future. Lewis, a key organizer of the weekend along with his colleagues at the AYA and the AACC, said after the events concluded: “The 45th anniversary was a time for reconnecting and reflection, but more importantly an opportunity to galvanize alumni to be proactive in sharing the gifts of our journey through Yale in helping our various communities.”

Many on hand agreed that the sharing of gifts, across generations and among communities, may be the biggest legacy of “The House” over its first 45 years. It is a legacy renewed by current students and supported by a “generational diaspora” of alumni, as Dawson noted, who “all have in common this thing called ‘Black Yale.’”

In a session looking at the history of “The House” at the opening of the weekend’s celebration, Azmar Williams ’15 quoted the founders as he urged those assembled to look forward:

“The history of the Afro-American Cultural Center or ‘The House’ as many of us like to call it is, primarily, a history of how students have shaped ‘The House’ and how ‘The House’ has shaped students,” he said. “From its inception, the center has stood not only as a nexus for mentorship, scholarship, and activism, but also as a launching pad for leaders in a wide and ever-growing range of fields. Over the past 45 years, the center has grown to reflect a more diverse black community at Yale — serving as a safe haven and place of refuge for students from all over the African diaspora — and has carried its mission beyond Yale and New Haven to communities around the globe.

“As we commemorate the 45th anniversary of this important institution,” he noted, “let us reaffirm our commitment to continuing the tradition of excellence in leadership that has marked ‘The House’s’ history and let us always seek to use our collective voice as an instrument “to keep the university aware of what it should be.’”